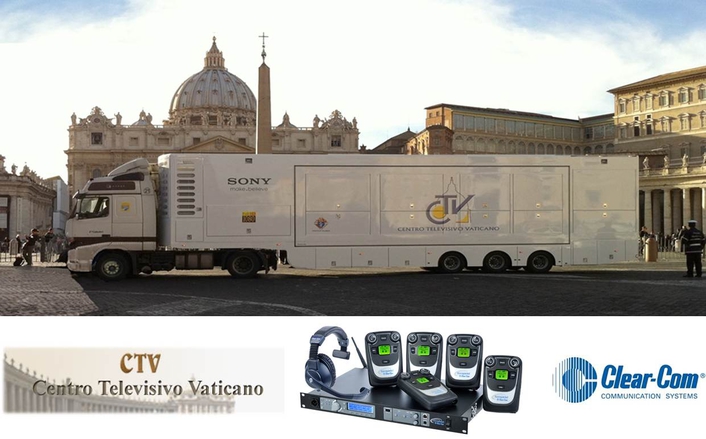 Since 1983, CTV, headquartered in Via del Pellegrino in Vatican City, has broadcast the Pope's pastoral ministry and other activities of the Holy See. Each year, they cover about 200 events from inside the Vatican as well as during the Pope's travels in Italy and abroad. The network’s footage is picked up via satellite by broadcasters, news agencies and editing facilities around the world. CTV has no production studios, as a majority of the broadcaster’s work is ENG. The new OB van, which has full HD capability, has become the central hub for critical operations at the network. Its four operating areas include the audio room, equipment room, primary and secondary production control with VTR and camera control.

“The combination of the Eclipse digital matrix with V-Series panels and Tempest2400 gives CTV a tremendous amount of communications flexibility, making it much less stressful to manage the broadcasting of the Pope’s ministry,” says Karlie Miles, Director of EMEA Sales, Clear-Com. “Our system has certainly proven to function flawlessly during critical situations. The signal transmitted from the Tempest2400 wireless intercom system easily penetrates the thick walls of the church and can travel far distances to the van. We are thrilled that CTV has entrusted Clear-Com to help deliver the Pontiff’s and Vatican’s message to worshippers around the world.”