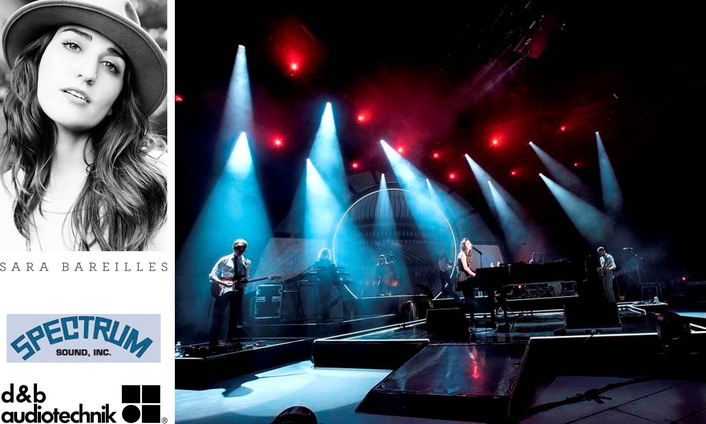 .
Such is the abundant talent of Sara Bareilles that 2015 will see her score a new theatre musical, record her next album, and no doubt add one or two performances for the Nations’ First Family for whom she has performed numerous times. All this from an artist who only recently completed her first full production headline tour, traveling right across the USA, rounded off with visits to Australia, New Zealand, and several Asian cities. A highly regarded, self taught singer songwriter and multi-instrumentalist who only bust upon an unsuspecting public in 2004. With such a reputation to maintain Trey Smith, who has worked for her since 2008, was particularly careful in his choice of audio system for the Bareilles tour.

“For about five years, we have been using Spectrum out of Nashville. In my early days as her sound engineer we were touring bus and trailer, so Spectrum might just provide a simple console package. They did that for a long time; started with a Profile, in-ear systems and a few d&b M4 wedges; it was six years till we carried full production on the 2014 Little Black Dress tour. But they have always cared for us really well. 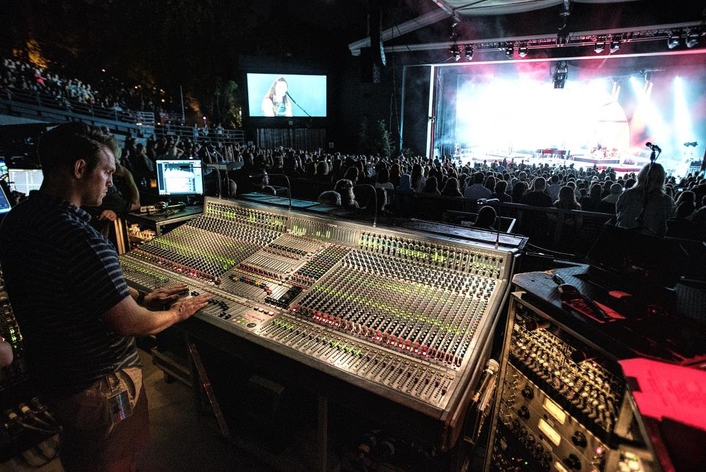 Bobby George, who is my contact at Spectrum, was the one who talked me into taking a d&b audiotechnik V-Series system for the tour,” Smith explains. “I made some calls of course, and spoke to a couple of sound engineer friends of mine to get some alternate opinions. Everyone just raved about the system. It proved perfect for the type of rooms we’d be playing, a mix of indoor theaters and outdoor sheds; anything from four to ten thousand people. In the bigger venues it was never lacking in horsepower. Plus when I looked at the truck space it took, basically we got the whole PA system on the dance floor. That made my job fitting the rest of the production in a whole lot easier. This might have been her first full production outing, but it was big; with video elements and a beautiful stage set. Fortunately, I’d mixed a one off show at the Greek in LA with V-Series the previous summer, so I had some first hand experience of its physical size and power and I knew it could deliver to the bigger places. That said, I can only emphasize the impact the new D80 amplifier from d&b has had on the system: It’s night and day as far as performance is concerned; night and day.”

Typically Smith flew left/right V8 arrays with the wider 120° horizontal V12 cabinets at the bottom. “At the biggest we flew six V-SUBs per side as well, and where possible had a twelve cabinet J-SUB array across the front of stage on the floor. Sara is not the Foo Fighters when it comes to low end, but she is dabbling in some tracks, an 808 drum sample for example, and I like to mix big and round so we do need that weight in the low end. Those cardioid subs are great, Sara likes to pull her ear buds in and out depending on how she’s feeling on stage and what song she is singing, that’s why we also have d&b M4 wedges at all her singing positions: not having that low end throwing back on stage is a big help. Plus the directivity we could achieve with the sub arc was amazing. At the Mann Center in Philly we played the Skyline stage to seven thousand people on the lawn. The furthest audience was maybe 300 feet and the system threw way back.

Oh yeah! My system tech’ from Spectrum was Chris Michaelessi; my first time working with him, he did a first class job,” adds Smith. “Whenever there were difficult situations we’d talk and he’d find a way to give me the platform I needed. And fast too, ArrayCalc to R1 Remote network, and then export all the settings right into the D80s the moment they were switched on. I could be up and running in no time; that speed is a bonus when you encounter a tricky room. When you work with a vocal range as astonishing as Sara’s you want to reveal every detail, the voicing of the V-Series is so clear I was never struggling whatever the venue.”