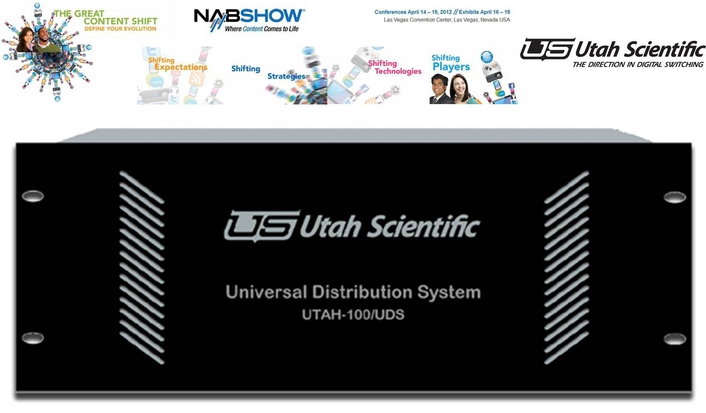 This modular system is based on I/O modules with 16 ports, interconnected by a crosspoint fabric that allows any input signal to feed any number of output ports. The UTAH-100/UDS will be demonstrated at the 2012 NAB Show at the company's booth, N4511.

The economical design of the modules makes it possible for a 4-RU frame to feed up to 144 output ports at a fraction of the cost and power consumption of alternative distribution-amplifier packages — with the added benefit of being able to reassign input signals to each output as operational requirements dictate. The system is suitable for use in all types of video operations, including television stations, production houses, and pro A/V installations.

"The UTAH-100/UDS is really a routing switcher hiding inside a DA frame, a new approach that is enabled by some recent advances in component technology," said Tom Harmon, president and CEO of Utah Scientific. "We're always looking for ways to apply the latest advances to give our customers the most cost-effective and reliable solutions possible."

The unit's flexibility is extended even further through the use of the award-winning FLEX-I/O modular I/O system, which allows users to select the signal format of each I/O port from a complete range of options including analog video, digital video over fiber or coax, DVI and HDMI, and IP-encapsulated ASI video streams.

The UDS is controlled and monitored through a built-in Web interface that allows the output ports to be assigned to blocks that are fed by a common input signal, making it simple to feed a large number of signal destinations with a new input source at the press of a single button. External hardware control panels and virtual control via Ethernet can extend the functionality of the system to local and remote users as required.

The new UTAH-100/UDS joins the family that includes the UTAH-100/XFD Fiber Distribution Frame, which packs up to 16 channels of coax-to-fiber and fiber-to-coax conversion into a compact 1RU frame, and the UTAH-100/XHDA High Definition Distribution Amplifier, a 3G-capable DA with eight amplifier blocks that can be programmed by the internal Web interface to serve two, four, six, or eight outputs.