Ukraine Rocks out With High End Systems Products and Consoles 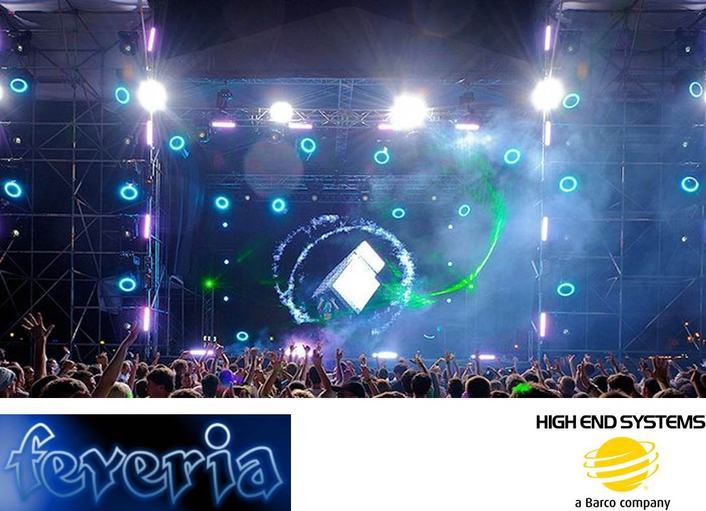 Rental company Feyeria counts on SHOWGUNS, Full Boar for success
The Ukraine is rocking out with a proliferation of products from High End Systems, a Barco company, on high profile events. Rental company Feyeria, one of the largest owners of HES equipment in the country, is most recently using SHOWGUN 2.5 automated luminaires and the Road Hog Full Boar on all areas of entertainment: concerts, conferences, TV shows, exhibitions, sports, corporate and political events.

Feyeria’s Dmytro Andrushchenko, project manager/stage designer, uses the SHOWGUN 2.5s on prominent projects for many reasons. “The SHOWGUN is the first powerful fixture with the LED ring. It combines the functions of spot, wash and an LED Tracking System. We like to use them in big Open Air-shows and concert halls, but especially using the LED ring on TV concerts and TV shows where it is most identifiable.”

The company owns 24 SHOWGUN 2.5s, for the first time using them in 2010 on Paul van Dyk’s show in Kiev, Ukraine. "These powerful fixtures hadn't been seen in our country before that. It's great for a show at 12,000 people and in such big halls,” says Andrushchenko.

Feyeria needed the power of SHOWGUN 2.5s for another outdoor show for Fat-Boy Slim at the Odessa Sea Commercial Port. The dance event for the Open-Air Show used 24 SHOWGUNs, chosen for their spot function. “Their powerful beam significantly covered the entire area of the Sea Port. The fixture was approved by Fat-Boy Slim’s technical team because it is perfectly suited for events of this magnitude.”

The Scorpions’ show at the Sports Palace

For The Scorpions’ show at the Sports Palace, Andrushchenko describes the night. “SHOWGUN pierced all the space of the stage with powerful light beams and created an ideal rock-atmosphere in the hall. The Sports Palace was overfilled with fans. The viewer was 100 percent satisfied with what was happening on stage.”

In the warehouse, the extensive inventory of High End Systems lighting products are joined by all products in the Wholehog line including the newest Road Hog Full Boar consoles.

“We like the Road Hog Full Boar for its compact size and ease to carry. This is useful in tours. Also we like the unlimited number of DMX outputs, integrated Art-Net output, MIDI, SMPTE, DVD-RW, ability to work with Flash Drive USB, and built-in 2048 DMX channels.

They turn to HES products for many reasons:  “High operational qualities. We like the new technologies. The weight of the equipment is less and it’s easier to work with. In addition, we like HES products’ designs. This is very important for any show! Finally, all the fixtures always have a powerful light beam.”

But it’s not just about products. People also helped in Feyeria’s success. Dmytro mentions Vladimir Andrushchenko, who founded Feyeria in 1978, and technical director Yuriy Andrushchenko as important players in the company’s business.