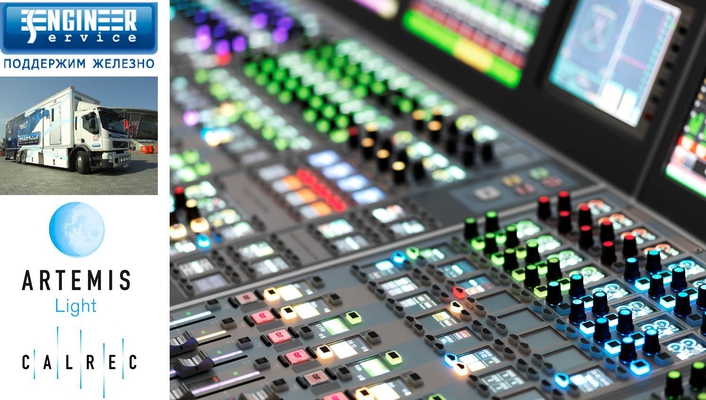 Second Calrec Console for New HD OBVan
With the delivery of an Artemis Light audio console, Calrec has made its second sale to Ukraine system integrator and OB truck company Engineer Service. Engineer Service will install the Artemis Light console in its newest mobile OB truck to mix live audio in stereo and Dolby® E 5.1 broadcast formats, and for multichannel recording in live production.

"With the Calrec Artemis Light console, we can do things we couldn't do before, such as provide more than two channels of 5.1 audio broadcast soundtracks. That capability is very important, particularly for live sports productions," said Dmitriy Prikordonny, general director of Engineer Service. "By using extra boxes on the field or stage, we can send and receive many more sound channels. We can serve the entire shooting area, whether that area includes a concert hall, a stage, a field, a broadcast van, or other links. The Artemis Light has improved our workflow while better satisfying our clients' needs."

The Artemis Light console will be installed in Engineer Service's new 40-foot OB truck, which can handle up to 16 cameras for HD video processing. The new truck will hit the road in midsummer to cover mostly live programming such as sports, concerts, and other outside productions. The Artemis Light joins a Calrec Zeta console in the Engineer Service fleet.

Engineer Service considered mixing consoles from other manufacturers but chose Calrec because it was the best fit for the company's workflow. Just as important, Engineer Service wanted to maintain its partnership with Calrec and its investment in Calrec products well into the future.

"By upgrading from our older Zeta technology to the Artemis Light, Engineer Service has not only shown its continuing support for Calrec, but also a commitment to move forward on the latest Calrec technology platform," said Michael Reddick, Calrec's European sales manager. "These are the types of long-term partnerships we strive for."