The BroadcastPro awards aim to promote and celebrate excellence in the broadcast industry across the Middle East and North Africa region.  twofour54 intaj received an Editor’s Choice Award for ‘Best Live Production of the Year’ for the 21st Gulf Cup of Nations in Bahrain. Two further Awards were presented to twofour54 partner production companies Qabeela New Media and Al Mohra Productions for ‘Peeta Planet’,  the pioneering social media travel series which won the ‘Outstanding Social Media Project of the Year’ and ‘Hammam Shami’, a major Syrian drama set in old Damascus which won the ‘Best Studio Set of the Year’.

Jamal Al Awadhi, Head of Sales, twofour54 intaj, said:
“intaj is making great strides in attracting production companies to Abu Dhabi and in providing the film and television expertise and support services to make world-class Arab content happen. The Gulf Cup win is a great result for intaj.  We were awarded this prestigious contract after successfully managing the organisation and live broadcast of the previous Gulf Cup in Yemen, so the Editor’s Choice Award represents yet another accomplishment for our team.  And after working so closely with Qabeela New Media on ‘Peeta Planet’ and with Al Mohra on ‘Hammam Shami’, it’s great to celebrate their success too. Congratulations to all involved.”

For the coverage of the 21st Gulf Cup of Nations in Bahrain, intaj’s mix of technical capability and production expertise meant it was a good fit for the contract. 37 HD cameras including a spider cam and ultra-motion camera were installed at both locations to ensure all the excitement of the football was captured live and to the highest quality. 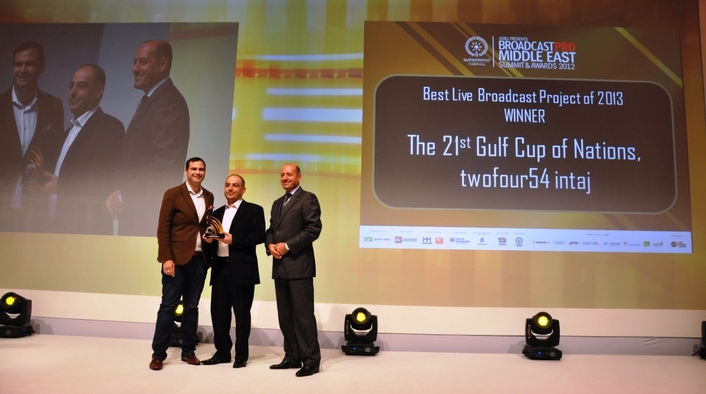 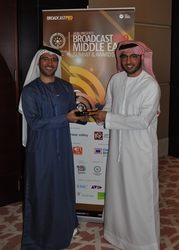 twofour54 intaj handled the production and post-production for the pilot of Qabeela New Media’s pioneering social media travel series ‘Peeta Planet’ aired on DMI’s Dubai One earlier this year. The pilot, which was shot on location in Tokyo, was supported by twofour54 ibtikar.  intaj handled the post production for all of ‘Peeta Planet’s’ commissioned episodes to date and will continue to do so for Series 2.

Al Mohra Productions’ ‘Hammam Shami’, the major Syrian drama which won ‘Best Studio Set’, was provided with two studios by twofour54 intaj to build the sets for the drama set in the old Damascus of the 1950s.  450m2 of studio space was provided for the old market and an additional 450m2 to build the Hammam.

Paul Baker, intaj Executive Director, had appeared earlier in the day on the Summit’s panel.  In his address to industry professionals he covered topics including the Abu Dhabi Film Commissions’ production incentive, which aims to attract further regional and international companies to Abu Dhabi and is available in the form of a 30% rebate on all qualifying spend in the United Arab Emirates.

It’s not the first time twofour54 intaj has enjoyed success at the BroadcastPro Awards.  In 2011 it was awarded a Broadcast Pro ‘MENA Special Recognition Award’ for its stereoscopic 3D lab facility.   Its other awards include the Digital Studio Awards’ ‘Post-Production House of the Year’ award, received in 2012 and Digital Studio Awards’ ‘Studio of the Year Award’ in 2010.

About twofour54
twofour54, the commercial arm of the Media Zone Authority-Abu Dhabi, is one of the Middle East and North Africa (MENA) region’s leading media and entertainment hubs.  As part of its mission, twofour54 is driving the development of the creative industries in the region, supporting talent and content development initiatives, creativity and young entrepreneurs.

Its initiatives are contributing to the growth and diversity of the Abu Dhabi economy and its campus is home to over 200 local, regional and international companies, including Ubisoft, Cartoon Network, Sky News Arabia, CNN, Flash Entertainment, Sport 360, Reed Exhibitions, Charisma, Tahadi and Jawaker.

twofour54 provides a range of services including: training across all media sectors; business development and funding support to UAE nationals and other Arabs with great ideas; a creativity lab that allows members to get involved in creative projects; and it facilitates world-class content through its production and post-production facilities.  These services are supported by tawasol, facilitating easy business set-up and providing ongoing support services.