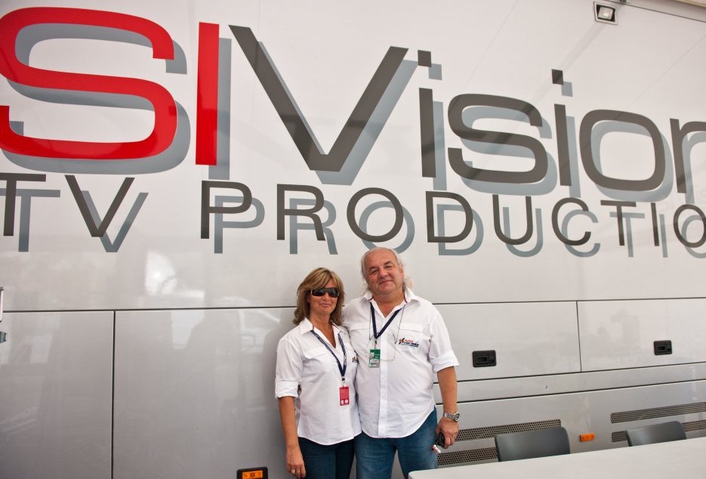 In 2006 Imre and Hilda Sereg founded SIVision TV Production GmbH
SIVision is one of the well-known production companies in Europe. Never before in the history a sports Emmy Award for outstanding technical implementation was given to a European TV Production. Imre Sereg as technical director has achieved it twice: 2009 and 2010 - for the global production of the "Red Bull Air Races".  He has not only received these awards, but also has build-up an international reputation for high quality production of TV live events.

A brief History
Imre Sereg, born in Budapest (Hungary) has studied audio engineering and has started his career as a musician and sound engineer. In 1976 he moved to Germany and in 1978 he became the sound engineer of the Nina Hagen Band. In the 1980’s he toured in Europe with Judas Priest, Ted Nugent, Nazareth and the Bert Kaempfert Orchestra for M.Scheller Concerts. As production manager and sound engineer Sereg was on European tours and world tours with Nena and Spliff.  From 1987 to 1994 he was working for ZDF as outside broadcast sound engineer on all kinds of productions. In 1994 he joined WIGE Media for three years as head of outside broadcasting and covered UEFA Champions League matches, Formula 1, DTM and STW races as well as boxing for RTL.

In 1997 he was one year with TopVision (covering the German Bundesliga and the UEFA Champions League final) before he started his own independent production company IMS Media Service. From 2000 – 2005 he was the General Manger in Germany for Alfacam and responsible for the coverage of a variety of live events ranging from AC/DC, Anastasia and Udo Jürgens up to the New Year’s Concert in Vienna or productions at the Marinskij Theatre in St. Petersburg. In 2004 he became responsible for the TV coverage of the Red Bull Air Race World Series.

SIVision TV Production GmbH
In 2006 Imre and Hilda Sereg founded their own company SIVision TV Production GmbH and continued with the TV production of the Red Bull Air Race World Series. This work was honored with two Emmy Awards in 2009 and 2010 by the Academy of Television Arts & Sciences. This award is the highest honor for innovation in sports programming. The Red Bull Air Race World Championship was one of the most logistically complex productions.

Until 2011 SIVision did live recordings of Police in Buenos Aires, Sting in Frankfurt, Durham and Berlin as well as three more New Year’s concerts and the Salzburg Festivals 2009 -2011. In addition to the music productions he continued his strong foothold in sports with productions of the UEFA Champions League, UEL Soccer, ICF Kajak World Championships or the FIFA Women’s World Championships 2011 for ESPN. For the match USA – Brazil he will get the Gracie Award in the category “Outstanding Sports Program” on 22 May this year in Beverly Hills. This award not only signifies exemplary production, it stands as a testament to the dedication that all of the ESPN team and the SIVision team made in televising this World Cup with the highest level of ambition.

Together with the Habegger AG SIVision was trying to offer an unparalleled portfolio of services in Europe for "medial experience worlds", events and TV-productions. SIVision was born in a spirit of Sereg Imre and his Vision, however it didn’t work out for Sereg in this constellation and he decided to leave the company and is selling his experience again independently.

This message was received by the TV Live Production community quite emotional. Nevertheless Imre Sereg is looking forward and we will see what’s up next.