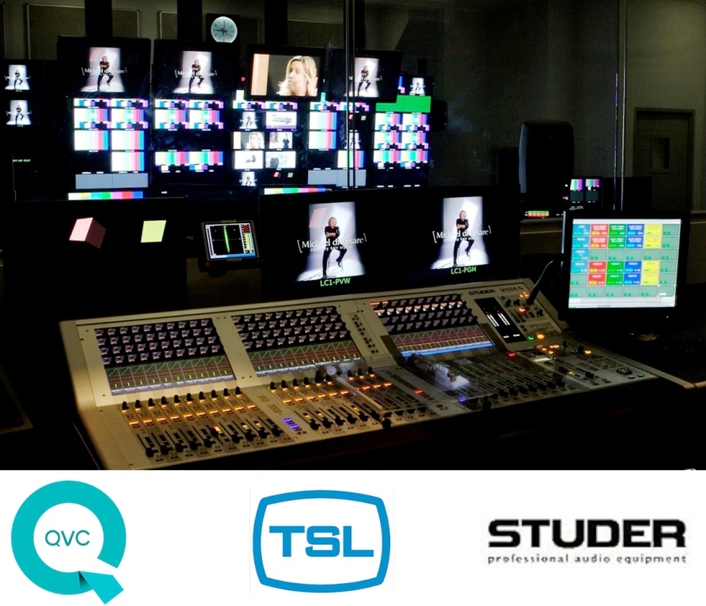 TSL has a long history of specifying Studer Vista consoles, and their Audio Applications Manager, Martin Dyster, said that in this instance the desks were chosen for their compact form factor, the familiarity that QVC’s newly-recruited sound engineers already had with the Studer topology — and the comfort the client was given in knowing that Studer’s Italian distributors, Audio Pro Group (APG), were based a short distance away in the event of a fast response being required.

In the end the choice of console had come from QVC. “There was a strong feeling that they favoured Studer and we certainly had no problem with that as we have specified Studer many times in the past,” said Dyster. “It was an easy and obvious decision to make as the Vista 5 fits the budget and delivers a lot of bang for the buck.”

He added that QVC also liked the desk architecture and the overall compact package, “while from our point of view we didn’t have the luxury of building large sound control rooms!”

The controls rooms are not dedicated to studio floors but can work as live or rehearsal galleries running productions including up to four studios. Being identical, and under overall control of the TSL Tallyman system, the rehearsal gallery is an instant backup for the live gallery.

“In other words, although each desk receives feeds from its counterpart, and they are looped back to each other for resilience, the two Vista 5’s function entirely independently, and are not networked.”

The principle Vista 5 inputs will be AES signals from the Quantel-based production and transmission server — de-embedded, processed, and mixed alongside QVC’s Presenter Mic feeds, and then re-embedded post the console environment for onward transmission. The Tallyman enables the technical coordinators to assign which Vista 5 is fed live to air and which is in rehearsal mode, while also managing radio mic, in-ear monitoring, studio camera assignment and emergency changeover control.

Because of the vast number of assignment configurations (and simultaneous splits to the consoles) required, TSL’s routing architecture contains a high degree of flexibility.

“And with Studer we knew we would be giving the client that reliability for the vast number of requirements and demands made of it.”

QVC view Italy as an essential market in the expansion of their international presence. Set up to compete with Mediaset SpA's Mediashopping network, QVC will broadcast live 17 hours a day on digital terrestrial platforms (principally the Telecom Italia Media Broadcasting system), with an initial target of reaching 17 million homes initially. The network will also be aired on satellite via Rupert Murdoch’s Sky Italia SpA.