TV3 and Sony Look to the Future of Irish Television

TV3 Group and Sony agree new HD studio partnership for brand new Dublin facility - The Sony HD Studio Dublin
Ireland’s largest commercial broadcaster TV3 has announced a technology partnership with Sony which will see the broadcast technology and solutions company provide the latest in High Definition Camera and support equipment for its new HD Studio in Ballymount, Dublin. The deal follows a series of discussions which culminated in an agreement at IBC 2012 and will see the new studio – which will be Ireland’s biggest fully HD studio – named The Sony HD Studio Dublin.

Sony’s technology solution will see six Sony HDC-2400 studio cameras and a Sony MVS-7000X vision mixer installed as part of the broadcaster’s ongoing HD upgrade across its facilities. The facility is due for completion in 2013 and the cameras and switcher will be provided by Sony specialist dealers Eurotek.

The development of Sony HD Studio Dublin follows the expansion and upgrade of TV3’s Ballymount facility earlier this year and the Sony HD Studio Dublin will provide a new and unique facility for the Irish TV production industry. All Sony businesses in Ireland have secured exclusive first usage of this facility as part of the deal.

The 500sqm studio, which will become operational by the end of the year, will be the new home to TV3 shows such as Take Me Out Ireland, which up to now has been filmed at The Helix, while if The Apprentice ever returns to the channel, its You’re Fired spin-off will relocate from a Dublin nightclub to the studio.

TV3 will also commission a raft of new audience-based shows, while existing programmes such as Tonight with Vincent Browne may undergo occasional changes of format to allow a studio audience to participat. 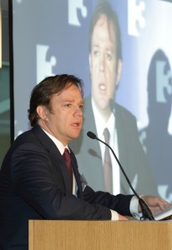 Pat Kiely, Commercial Director TV3 Group commented: "Television is a global business and this deal with Sony launches TV3’s new studio into a global production environment. The Sony HD Studio Dublin provides a world class facility for TV3 and other content producers in Ireland. With Sony on board, we look forward to welcoming international broadcasters and producers to experience these excellent facilities for themselves. This is a major development for the sector in Ireland.”

Kiely says the negotiations brought him back to his “Mad Men pitch days” and that “we did have to sell the idea to Sony”. In terms of its technological sophistication, TV3 says the Sony HD Studio Dublin will be “on a par” with ITV’s London Studios, the BBC’s Salford studios and the Fountain studios in Wembley, where The X Factor is filmed. “Our studio will offer similar facilities, but at a lower cost,” Kiely continued.

TV3 chief executive David McRedmond recently joked at a media conference that he was “desperately” trying to equip the studio and that there would be “a collection on the way out”.

As part of the naming rights agreement, every programme produced at the studio will feature a Sony sting in the closing credits, while it will also be verbally signalled in advance that the programme is being broadcast from Sony HD Studio Dublin.

Sony Sales Director, Dave Dougall added: “Sony has long been at the forefront of broadcast technology for live production and the solution we have delivered for TV3 enhances its ability to deliver a broader range of programmes in HD. HD capabilities are a standard requirement for broadcasters and TV3 will have one of the most advanced studio facilities in Ireland.”