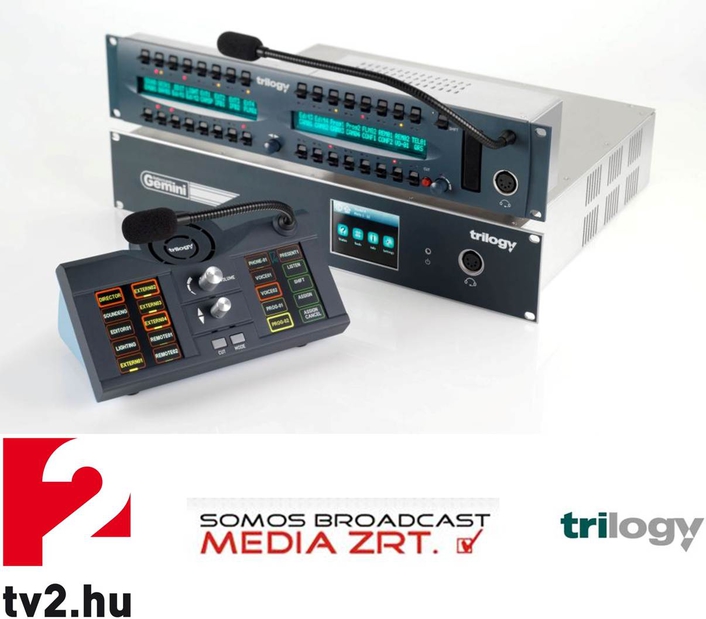 TV2 delivers a wide range of programming including US hits like Desperate Housewives as well as news and home grown entertainment shows and therefore required a sophisticated feature set with easy to use operator interfaces and absolute reliability. Supplied by Somos Broadcast Media ZRT, Trilogy’s Hungarian distributor, Gemini will form a distributed network of five matrices between two buildings connected by a bi-directional fibre ring. Taking full advantage of Gemini’s distributed architecture TV2 are able to overcome the substantial difficulties present in cabling a traditional central matrix through their existing buildings and studios.

By combining integral IP capabilities with the use of both a dual redundant ring of audio and IP failsafe routing, Gemini eliminates the single point of failure of other systems and ensures a robust and ultra resilient intercom solution.

For TV2, a key feature of Gemini was the wide choice of operator panels and the ability to expand them almost limitlessly on the network. Indeed TV2 ordered a selection of panels including lever key and LCD push buttons to create the best fit solution for their operators. Additionally, Gemini’s IPPanel connectivity allows expansion out over a LAN or WAN.

Laszlo Rozganyi, Technical Director at Somos Broadcast Media ZRT, explained: “Gemini meets the needs of many of our customers, with comprehensive functionality and ease of use setting it apart as a truly unique and innovative solution. We are pleased to see Trilogy building on the success we have seen over recent years with both Commander and Orator intercoms and expect TV2 to be just the first in a long line of broadcasters who wish to reap the benefits of a scalable and resolute IP platform.”

Barry Spencer, General Manager of Broadcast at Trilogy, said: “We are thrilled that TV2 have selected Gemini for this prestigious contract. With our history as the pioneers of IP Intercom we were always confident that Gemini would deliver class leading performance and we’re very happy that TV2 have chosen to enjoy the benefits that this brings.”

Somos Broadcast Media Zrt. made inroads to the Hungarian market with the distribution and leasing of professional audio- and video-technological equipment. The company was established in 2009 and within a short time succeeded in becoming top official dealer of SONY professional products. After closing numerous projects in the last year the company has improved its market position as a system integrator significantly. In addition to Trilogy, Somos also represents companies like PROBEL, TSL, MIRANDA, ROSS VIDEO, SACHTLER and NDSATCOM. In addition Somos was responsible for the design and installation of the biggest post production studios in the country with its key partners;Focus Fox, Cabbage Group, Colorfront, Raleigh Studio. Somos boasts an impressive client list made up of numerous TV companies including TV2, HungarianNational TV, MTV, Duna TV, ATV and a number of small regional studios, audio and video studios doing supplementary work and product agencies.

Trilogy has supplied audio communications equipment to customers in more than seventy countries since 1986. The company was originally formed to design and build video and audio infrastructure equipment for the television and radio broadcast market. It continues to serve this market but now also offers its products to a wide array of customers in defence, emergency management and training and simulation, oil and gas and other industries. Trilogy counts some of the world's best known names among its customer base. These include BBC,ITV, CBS, Hearst-Argyle, Fox TV Poland, France Television, Arqiva, Star TV, Times TV, Qatar TV, Reuters and many others.