TV is the world’s favourite video 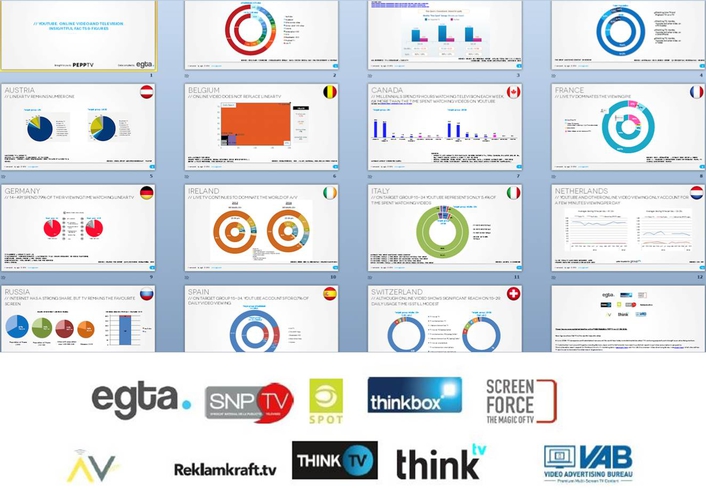 TV companies and trade bodies from around the world have today reminded marketers about TV’s enduring popularity and strength as an advertising medium. TV trade bodies from around the globe, including Germany, Spain and the Netherlands, have recently published reports to put video consumption in perspective.The studies echo recent research by Thinkbox (the UK’s TV marketing body) and the VAB (the American Video Advertising Bureau) which showed how TV continues to dominate the video lives of all generations.

How TV dominates the video landscape
·    In the United Kingdom, TV accounts for 76% of total average video consumption, whilst YouTube accounts for 4.4% of video viewing. For 16-24s TV accounts for 57.5% of all video, compared to 10.3% for YouTube.

·    In the USA, ad-supported TV maintains a substantial time spent advantage against YouTube among millennials (18-34) (86% vs. 14%). According to the VAB, a TV show’s monthly audience is on average 50% higher than the average YouTube channel’s video views (and its TV audience per episode is 6 times higher than an average YouTube video).

·    In Australia, broadcast TV dominates video consumption. Australians spend 85 hours a month watching linear TV, accounting for 84.5% of all screen-viewing time. In addition to this, viewers also spend 112 minutes a week watching internet delivered Broadcast TV across a range of different screens. For 18-49s seven in every ten hours of screen viewing is spent watching Broadcast TV on a TV. 90% of all TV viewing is watched live.

·    In Belgium, 71% of the total video volume seen on any screen is spent with linear TV (live and time shifted), whilst VOD – via TV operators or pay-TV services – represents 15% of this total video consumption. If one focuses on young target groups (15-24), online video represents 18% of this volume (an addition of online TV platforms, social networks and other websites), with 8% which can be attributed to YouTube and 10% to other websites.

·    In Germany, 90% of video usage can be attributed to TV (live +3 days, on the TV set), whilst 3% can be attributed to alternative means of TV distribution (i.e. non-TV set screens) and 5% is spent watching free online videos. These numbers vary slightly when looking at the younger target group (14-49) but the trend remains the same: respectively 79%, 5% and 10%.

·    In the Netherlands, YouTube and other online video viewing only account for a few minutes of total video viewing per day (approx. 8 minutes vs. 70 minutes spent on TV) for teenagers. For the total population, the numbers are even clearer: on average, less than 3 minutes a day are spent watching YouTube compared to almost 160 minutes a day with TV.

·    In Russia, the story is no different, with an average of 15 minutes per day spent on YouTube compared to 289 minutes for TV (population 6+).

Said PEPPTV, the informal grouping of broadcasters’ trade bodies and sales houses: “Video is a confusing world with lots of numbers flying around. But despite the popularity and occasional hype around video services, this new international data underlines TV’s unmatched and continued popularity around the world. It is the world’s favourite video. We hope international marketers will base their decisions about advertising investment on these facts and TV’s proven effectiveness.”