Brazil's TV TEM Boosts ENG Broadcast Coverage with Large Equipment Purchase from IMT
In an effort to increase its ENG coverage in Brazil’s competitive broadcast market, TV TEM, a regional affiliate of TV Globo, has made a substantial purchase of equipment from Integrated Microwave Technologies, LLC (IMT), a Business Unit within the Vitec Group’s Videocom Division, and a leader in advanced digital microwave systems for the Broadcast and Sports & Entertainment markets. The new equipment, facilitated through Videodata, a leading Brazilian systems integrator and equipment supplier, will be used to outfit OB vans and motorcycle vehicles for both the TV TEM Sorocaba and TV TEM São José do Rio Preto stations. The newly outfitted vehicles enable TV TEM to have both OB Vans and broadcast-capable motorcycle units in each region.

“We chose IMT’s digital microwave equipment because we have confidence in its Nucomm and RF Central brands, in addition to the local support provided by IMT and Videodata,” says TV TEM networking engineering manager Ewerton Maciel. “We also have had a great track record with Nucomm over the past 20 years. We plan on ‘debuting’ our brand new IMT-equipped vehicles in our coverage of several 2014 FIFA World Cup™ teams, including Japan, Russia, Honduras and Algeria.”

“TV TEM’s large purchase of IMT gear is a clear sign of the network’s commitment to providing its viewers with the broadest and very best in regional coverage,” says IMT Divisional Chief Executive Stephen Shpock. “We are excited about TV TEM’s purchase and look forward to working with Videodata in the deployment of our gear into the field.” 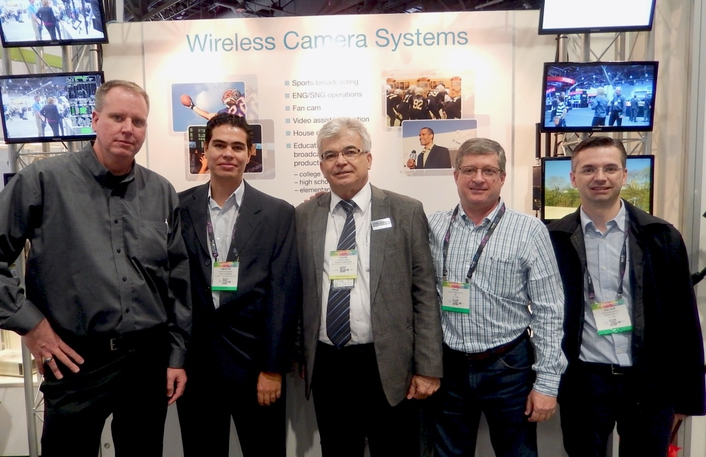 IMT’s CPTx-II is a lightweight RF video transmitter that delivers HD/SD output at up to eight Watts in 2k DVB-T COFDM mode. The CPTx-II is ideal for covering motorcycle and bicycle races, marathons, triathlons and other fast-paced, high-speed ENG/OB events using such smaller on-course vehicles as cars, motorcycles and even bicycles.

The CPTx-II was designed to offer exceptional RF performance and ease of operation. Instead of ‘run and shoot,’ motorcycles and other smaller ENG/OB and production vehicles now are ‘run and transmit.’ The CPTx-II supports video/audio/data/telemetry with selectable modulation bandwidths of 6, 7, and 8MHz. In addition to the small size, the unit has very low latency and a low power consumption. It weighs about 3 kg and comes with a variety of mounts, including special mounts for motorcycles. The maneuverability of a motorcycle fitted with video transmission capability offers significant advantages in congested, high-traffic locations as the camera can get onto roads and into locations that might be too narrow for a traditional vehicle to navigate safely.

The RF Central VClip microLite HD Transmitter (VMLT) is a new addition to IMT’s award-winning RF Central family of microLite HD products. The VMLT is a compact wireless camera video transmitter that mounts on the end of the cameras between a plate and any V-mount battery, a widely used mounting option for the industry’s leading professional cameras. The V-mount option is integrated on both sides of the VMLT transmitter, allowing the transmitter to be mounted to the camera, then the battery to be mounted to the transmitter. As a result, the battery can be used to power up the transmitter and pass power through to the camera. With its compact, clamshell design, the VMLT is ideal for a variety of mobile applications, including live sports events, reality TV productions, ENG/OB broadcast and video assist.

The Nucomm Newscaster VT7.4 is comprised of a HD/SD encoder with adjustable long GOP encoding featuring I, P and B frames as well as a low delay mode. The COFDM modulator has full control over the modulation formats, bandwidth, data rate and guard interval. For increased flexibility a wide array of inputs are provided including video/audio, SDI (HD) with embedded audio, ASI and 70 MHz. The VT7.4 features software generated modulation formats that are stored in onboard, circuit board PROMs including FM (NTSC/ PAL), COFDM, VSB, single carrier QAM and DVB-S. For increased flexibility, the software can be easily updated as additional digital software formats become available.

TV TEM is a regional network of the Brazilian TV Globo affiliate that covers 318 municipalities in the state of São Paulo, with four television stations (Sorocaba, Bauru, São José do Rio Preto and Itapetininga). There are also sub-offices in Araçatuba, Avare, Botucatu, Ourimbah, Itapeva, Jundiaí, Marilia and Votuporanga.