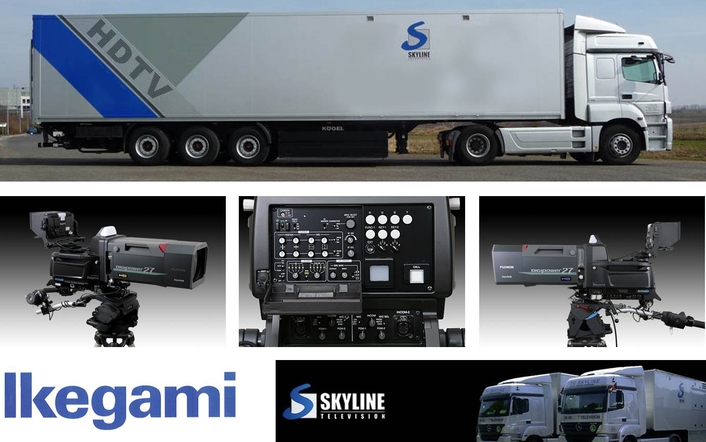 .
The production specialist from Mainz has equipped the most advanced Outside Broadcast Vehicle in its fleet with high quality camera systems from IKEGAMI. As part of the new high-end OB truck OB7, TV Skyline purchased a total of 22 Unicam HD cameras HDK-97A/970A. The brand new flagship OB7 celebrates its 2014 world premiere on April 29 and is additionally equipped with a HiMotion II camera system for HD productions in ultra-slow motion.

TV SKYLINE builds its foundation for TV and television productions on world leading technology. Having achieved outstanding results in a test OB Unit, it was decided to increase their future use of the advanced HD camera systems from IKEGAMI.

By opting for the camera systems from IKEGAMI, TV SKYLINE’s CEO, Wolfgang Reeh creates from the perspective of the prerequisite for reliable transmissions at the highest level: "TV SKYLINE requires high-quality systems with excellent image quality and flexibility.  Also the service is very important to us. Here IKEGAMI convinced us with a fast and reliable support and the facility for adjustment of the cameras to our specific needs at Ikegami’s manufacturing site in Neuss, Germany “.

The Unicam HD cameras HDK-97A/HDK-970A are equipped with new AIT 2/3 " CCD sensors. They allow for completely new digital signal processing to improve the image and to allow exact and detailed reproduction of color transitions. The dockable camera  system allows operation with fiber optic adapters for the transmission of 3G signals for newly developed 3G base station BS -97, and the use of digital triax adapters. It supports the formats 1080i/720p, 3G 1080/50p 4:2:2 and 4:4:4 1080/50i. The studio version HDK - 970A provides the necessary robustness and balance for the studio productions.

TV SKYLINE OB7 highlight from the IKEGAMI product range is the latest generation HiMotion II camera system. It has already produced stunning ultra-slow-motion pictures for the Bundesliga, the UEFA Champions League, the UEFA European Football Championship in 2012 and the Olympic Games in 2012 and 2014.

Developed in cooperation with NAC Image Technology, this high-end camera impresses with high sensitivity and a dual anti-flicker correction. The built-in memory lets you capture up to 1,000 frames per second for playback of critical events and action in sports productions. The camera system works in formats 1080/50i and 720/50p, which enhance its versatility.

Another advantage of the camera systems from IKEGAMI is the compatibility between all products. Thus the HiMotion II fits easily in the operating configuration and matches the colorimetry of the Ikegami Unicam HD cameras and other manufacturer’s products.

In addition, IKEGAMI equips the TV SKYLINE with a total of 22 professional ULE 217 Full HD monitors. High-quality and ideally suited for HD video monitoring, these LCD displays can be optionally installed in a rack,  thanks to a VESA interface, mounted on the wall or can be used with a table stand.

IKEGAMI is a leading manufacturer of professional products for the broadcast industry and is known worldwide for high quality products for broadcast, CCTV, industrial and medical applications.