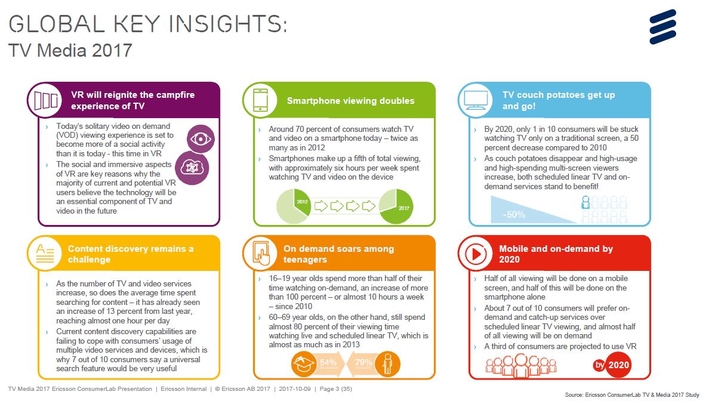 • 50 percent of all viewing will be done on a mobile screen, with half of this done on the smartphone alone

• By 2020, one in three consumers will be Virtual Reality (VR) users

Ericsson (NASDAQ:ERIC) unveils the eighth edition of its annual ConsumerLab TV and Media report, which details the massive growth in TV and video viewing and the ongoing shift in the way consumers watch content.

Supported by eight years of extensive media insights, Ericsson ConsumerLab predicts that the growth of on-demand viewing will continue to soar through to 2020, making up almost half of total viewing. 50 percent of all TV and video viewing will take place on a mobile screen (tablets, smartphones and laptops), an increase of 85 percent since 2010, with the smartphone alone accounting for almost one quarter (an increase of nearly 160 percent since 2010). Additionally, VR will be on the road to becoming mainstream, with 1 in 3 consumers becoming VR users by 2020. 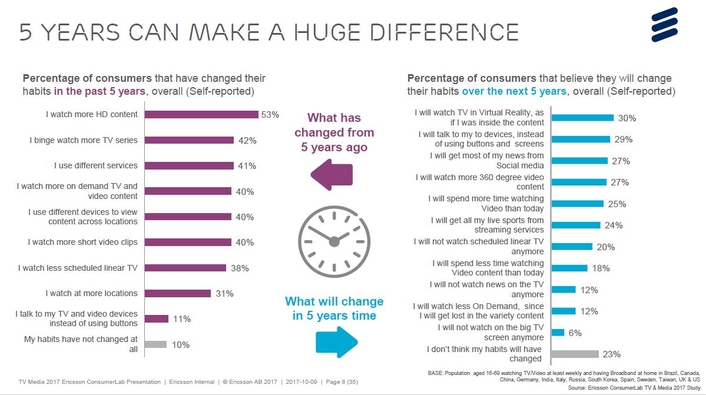 Anders Erlandsson, Senior Advisor, Ericsson ConsumerLab, says: “We can see that consumers are not only watching more video but also changing how and when they do so. This is also shown through the continued growth of mobile viewing, which has been a booming trend since 2010. This year also marks the first time that we have explored the level of consumer interest in VR in conjunction with media consumption, and the findings have been fascinating. VR has the potential to bring together people from all over the world and create deeper, more personalized, and more complementary media experiences. As consumer expectations for on-demand, mobile and immersive viewing continues to increase, the TV and media industry must focus on delivering highly personalized services in the very best possible quality available.” 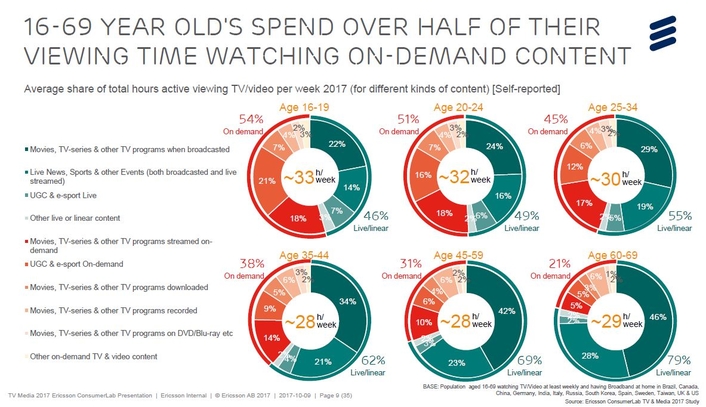 TV and video viewing is on the rise; but how, when and where we watch content is changing

Time spent watching TV and video content has reached an all-time high of 30 hours a week, including active viewing of scheduled linear TV, live and on-demand internet services, downloaded and recorded content, as well as DVD and Blu-ray. However, close to 60 percent of viewers now prefer on-demand viewing over scheduled linear TV viewing, an increase of around 50 percent since 2010. The average number of used on-demand services has increased from 1.6 in 2012 to 3.8 services in 2017 per person; 2 in 5 consumers already pay for on-demand TV and video services today and nearly a third (32 percent) say they will increase their on-demand spending in the next 6-12 months. Portability is also becoming increasingly important factor, with more than a third of consumers wanting access to content when abroad. 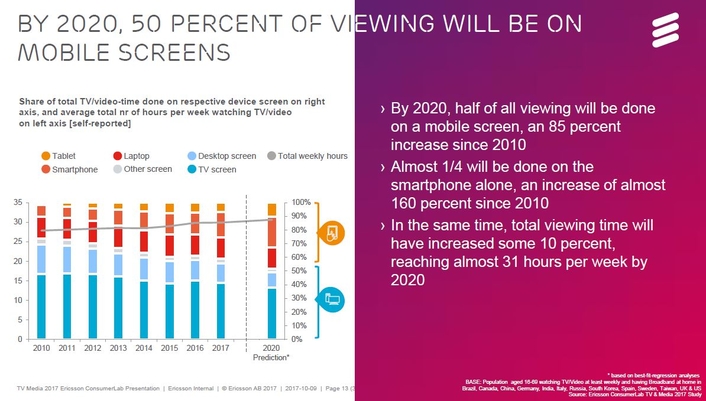 Smartphone viewing also continues to gain ground; approximately 70 percent of consumers now watch videos on a smartphone – double the amount from 2012 – making up a fifth of total TV and video viewing.

16-19-year-olds watch the most content each week (33 hours), an increase of almost 10 hours a week since 2010. However, more than half of this demographic spend their time watching content on-demand, with more than 60 percent of their TV and video viewing hours spent on a mobile device screen. 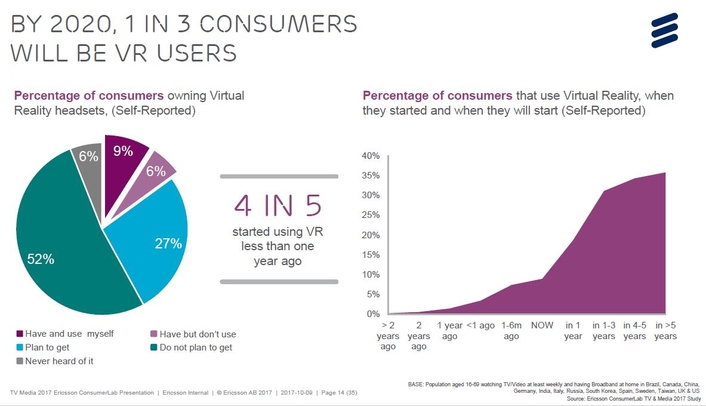 The findings also show that while consumers have more access to TV and video services than ever before, the average time spent on searching for content has increased to almost one hour per day, an increase of 13 percent since last year. In fact, 1 in 8 consumers believe that they will get lost in the vast amount of available content in the future.

With the user experience becoming ever more fragmented, 6 in 10 consumers now rank content discovery as “very important” when subscribing to a new service, while 70 percent want ‘universal search for all TV and video’. 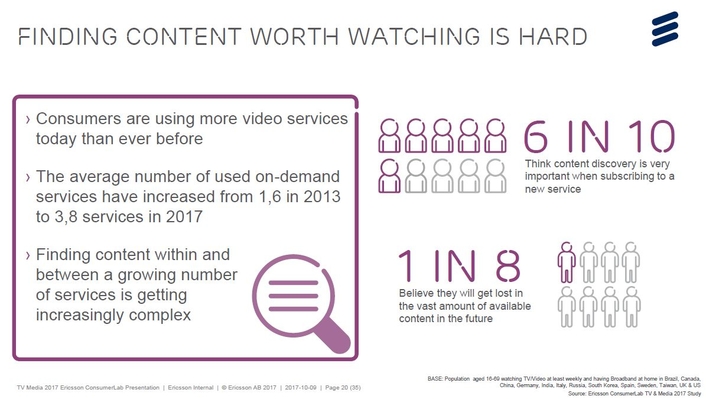 The social and immersive quality of VR technology is helping to add a new and valuable dimension to the viewing experience. With a third of consumers projected to be VR users by 2020, the technology is expected to play an essential role in the future of TV and video.

However, if consumer interest in VR is to increase, several things will need to change. Close to 55 percent of consumers planning to get VR devices would prefer it if the headsets were cheaper, and almost half think there should be more immersive content available. A third would be more interested in VR if they could get a VR bundle from their TV and video provider.

Consumers also value high quality viewing experiences as well as immersive experiences. Close to a quarter of the surveyed consumers say they already have access to a 4K UHD TV screen and another third plan to get one. 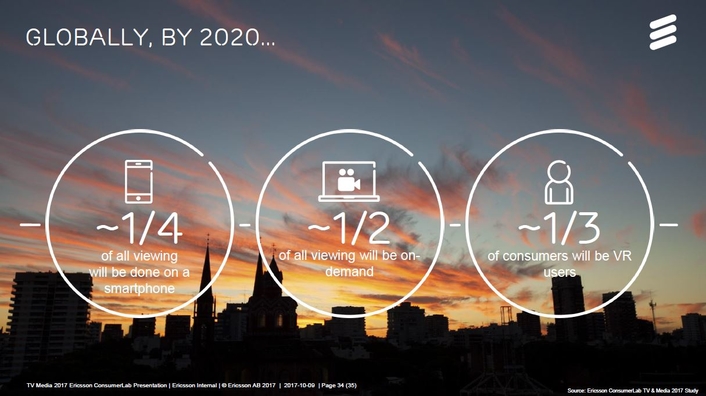 Quantitative data was collected from 13 countries. Approximately 20,000 online interviews were held with people aged 16–69 in Brazil, Canada, China, Germany, India, Italy, Russia, South Korea, Spain, Sweden, Taiwan, the UK and the US. All respondents have a broadband internet connection at home and watch TV or video at least once a week, and almost all use the internet on a daily basis. This study is representative of more than 1 billion people. Qualitative insights were gathered through in-depth interviews conducted in virtual reality (VR) with English speaking users of VR. These respondents all have multiple devices and a broadband internet connection.

A consumer-driven future of media