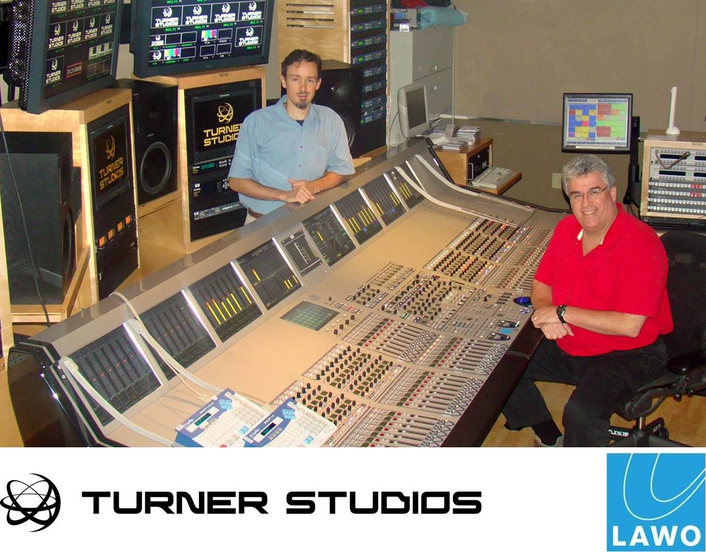 New console and re-structuring of shared router I/O resources enhances operations: Erinn Thorpe on left and Rick Perry
Lawo is pleased to announce that Turner Studios, the broadcast production division of Turner Entertainment Group that provides turnkey services for film, video, and audio production for all of the Turner Entertainment Networks, has taken delivery of a second Lawo mc²90 production console.

The mc²90 is Lawo’s flagship large format production console. This new, second console resides in ACR21. The new desk is configured with 48 channel faders, 16 central faders, 256 channels of AES I/O, 48 analog inputs, and 64 analog outputs. There are 7 DSP cards onboard that are capable of 448 fully-processed channels. The console’s core is tied to a Nova73 HD MADI Router with 192 channels of MADI I/O using fail-over redundant connections. For this project, the Lawo Nova 73 HD was expanded to 40 MADI I/O ports, providing access to 8 sound stage/studios and other shared resources such as a 64-channel I/O Pro Tools|HD system and the other four Audio Control Rooms, which include the studio’s first mc²90 and three additional consoles. The 8000 x 8000 Nova73 HD router is currently configured for approximately 1300 signals in and 1000 signals out.

Rick Perry, Studio Audio Manager at Turner Studios, reports the new console will be used for live sports studio shows and sports integration, including NBA, MLB, NCAA, NASCAR, PGA, and broadband programming. Perry notes, “Among the numerous shows we’ll be producing here, the new system will be used in the production of NBA Gametime Live, which is the flagship program of NBA TV. Additionally, the new system will be used for musical performance programs, talk shows, and as part of our video production facility’s live and post operations.”

Physical installation and wiring for the new Lawo mc²90 was completed August 1st. The first shows using the console were taped the week of August 15th—even as training for operators new to the console and a refresher for those familiar with it from ACR22 was taking place.

When queried about those characteristics that made the Lawo mc²90 the best choice for their facility, Erinn Thorp, Senior Production Engineer at Turner Studios, responded, “The console’s flexible work surface was particularly important to us. It’s ability to function either as the central control of all channels and functions for one operator, or isolated control of any of the six channel bays for productions requiring two or more operators really fit our needs. Similarly, the fully redundant console core router, as well as fully redundant connections to the control surface and to all the control surface modules was equally important. This system provides for redundant MADI connections between the consoles and the central MADI Router as well as redundant MADI connections to the local DALLIS analog I/O frames.” 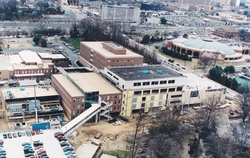 “In addition to the console’s highly customized monitoring section,” Thorp continued, “the enhanced rights-management of shared router I/O resources—including Lawo mic preamps integrated with the Virtual Studio Manager (VSM) software and rights-management of other shared mic preamps—adds tremendous flexibility for accessing and working with the multitude of sound sources we typically encounter.”

The deployment of the new console and the enhancement of the router commenced last December and involved proof-of-concept demonstrations and several meetings both in Atlanta and at Lawo’s main headquarters in Rastatt, Germany. The new mc²90 arrived in early July and, while the AES and analog wiring was being fitted with the various connectors and tested for the Lawo system, the console’s core and surface were up-and-running. All of this preparation work made for a simple and quick transition once the existing mc²90 console in ACR22 and the Nova73 router were made available for commissioning and testing along with the new mc²90 console in ACR21.

Reflecting on the successful deployment of the new console and expanded router capabilities, Perry offered this final thought, “Right from the start, the operators felt very comfortable working on the new console. The biggest challenge we encountered was deciding which way they wanted to execute their setups because of the console’s versatility. Furthermore, the built the rights-management system is well designed with expansion in mind, so incorporating additional hardware in the future can be handled with little or no downtime required.”