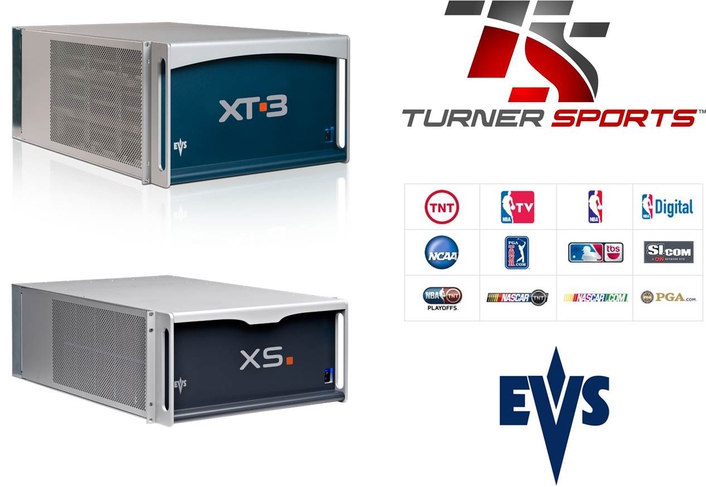 New centralized workflow will feed on-demand content for wide-ranging new media outlets
Top US broadcaster Turner Sports has selected EVS solutions to provide a centralized ingest and playout workflow for its live sports and webcast events. EVS, a leading provider of broadcast and media production systems for sports, news and TV entertainment, supplied XS and XT3 video production servers, among other tools, to enable constant recording and a fail-safe workflow.

The new system will be used to feed content to Turner Sports’ many new media partners as well as for live studio production. It will also provide Turner Sports with a historical record for search and retrieval of all archived content. The servers are housed and managed by Turner Studios, the full service broadcast production division of Turner Entertainment Group, providing turn-key services including live and post-produced video and audio production, custom music and sound design, on location remote film and video production, scenic design and set construction as well as a full service visual effects group, Turner Studios Effects.

With 5,400 live US sports events every year and 27,000 hours of content to collate, edit and broadcast, Turner Sports has a big responsibility to provide quality content to its many media outlet partners. The company seamlessly broadcasts live sports for multiple TV channels such as TNT and TBS, including coverage for the National Basketball Association (NBA), Major League Baseball (MLB) and National Association for Stock Car Auto Racing (NASCAR), while creating and contributing content for new media partners such as PGA.com, NBA.com and NASCAR.COM.

Turner Sports’ previous production system had grown organically out of four incompatible, decentralized systems, which were insufficient for the scale of their production needs. While some EVS servers were deployed for studio production playback, they were used only as bolt-ons to the system. Turner decided to rollout the new technology in time for the start of the 2011-2012 NBA season and the 2012 NCAA March Madness basketball tournament.

Turner selected EVS as the server backbone of the new system, comprising seven EVS XS ingest servers with 28 inputs, four XT3 playout servers with 16 inputs, 16 XTAccess servers and 10 IPDirector suites. The dedicated ingest/playout network records content locally. At the same time, HD content is streamed close to real time through XTAccess servers to create multiple high-resolution copies on redundant SAN systems, as well as proxies for logging. With EVS’ live network, Turner can get their content to air even in the event of a catastrophic failure in the SAN network or third-party equipment.

EVS worked closely with several third-party manufacturers - including Dalet, CineSys, Active Storage, Stainless Code, Quantum and Apple – to create a customized and seamless workflow solution to meet Turner’s needs. EVS XS servers are tightly integrated with Dalet’s media asset management system, which initiates recording and streaming to the SAN. After editing in Final Cut Pro, a Dalet plug-in restores the finished content from the SAN back to EVS servers for playout.

“In today’s fast-paced ‘content anywhere, anytime’ world, effective media workflows are critical for media organizations such as Turner to enable them to get content to affiliates quickly and efficiently. We worked very closely with third-party technology providers to create an integrated end-to-end solution to meet the scope of Turner Sports’ demands,” said Gregory Macchia, general manager of operations, EVS. “We’re delighted to extend our long-standing relationship with Turner Sports, and based on the success of this new system, they will be moving ahead with the next phase of the project, adding more channels and playout systems in the summer of 2012.”