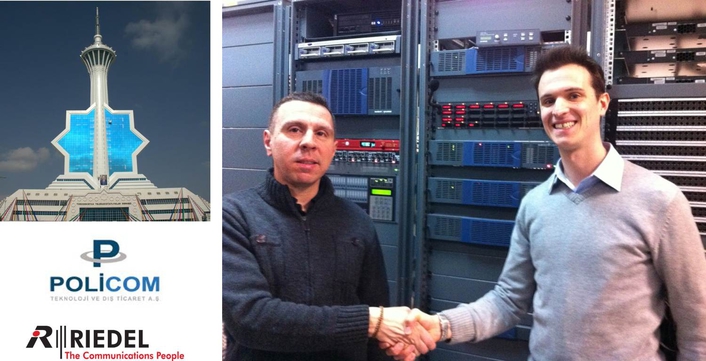 Burak Dagdeviren from Policom and Felix Sohn from Riedel Communications (left to right)
The Turkmenistan TV Tower, one of the most prestigious broadcast projects in the Central Asian region, runs on a comprehensive communications infrastructure from Riedel Communications. Riedel, the renowned manufacturer of real-time networks for video, audio and data, delivered a flexible system combining Artist Digital Matrix Intercom and Acrobat Digital Wireless Intercom technology for the tower's studios and the OB trucks. The Turkish provider Policom is responsible for the installation.

With a height of 211 meters and an elevation of nearly 1,000 meters above Ashgabat, Turkmenistan's capital city, the Turkmenistan TV Tower is an impressive building. The tower transmits six channels, of which four broadcast in SD and while two are in HD. It also houses various other broadcast studios, an OB truck fleet and the transmission facilities of the channels.

At the heart of the studios in the tower are six Artist 128 mainframes together with Artist 1000 series control panels. Due to their modular approach the system can be easily expanded in the future to form infrastructures of up to 1,024x1,024 ports. Flexible programming of the matrix, extensive interfacing and digital audio quality are key features to Riedel's Artist Digital Matrix Intercom solution.

The TV Tower also incorporates an Acrobat Wireless Intercom system that is interfaced with the wired intercom infrastructure. Acrobat's DECT based system is license-free and offers seamless handover between cells. A total of 14 CC8 Base Controllers, 68 antennas and 71 beltpacks are used for providing wireless communications within the studios.

“The entire TV Tower was built in under 18 months. Working under such a tight timeline is a great challenge. High product quality and a close cooperation with the manufacturers are pivotal to the success of a project like this. It's good to know that we can rely on the expertise and the technology of Riedel in this project”, said Burak Dagdeviren, project manager at Policom.

The three trucks of the OB truck fleet each feature an Artist 32 mainframes. While in field-operation the nodes of each truck can be interconnected with simple dual fiber links to form a distributed matrix. Furthermore, all trucks are equipped with Artist 1000 series control panels and Riedel RiFaces for integrating radio communications into the wired intercom infrastructure.

About Riedel
Riedel Communications designs, manufactures and distributes the most pioneering real-time networks for video, audio and communications for broadcast, pro-audio, event, sports, theatre and security applications worldwide. The products reflect today’s leading-edge technologies that translate tomorrow's demands into today's solutions. The Riedel group of companies also includes a European based large rental operation that provides radio and intercom services, event IT solutions as well as fiber-based and wireless audio & video transmission systems for large scale events such as the Olympic Games or the FIFA World Cup. The Company was founded in 1987 and today employs over 300 people located within 10 locations in Europe, Australia, Asia and North America.