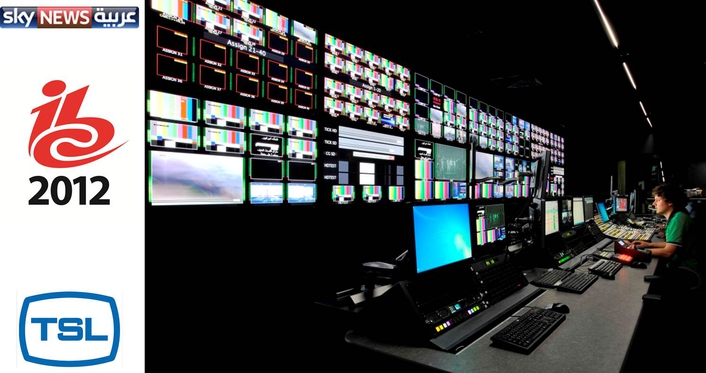 Amongst other cutting-edge elements, TSL provided Sky News Arabia with a universal bookings system
Sky News Arabia has been shortlisted for an IBC 2012 Innovation Award in the Content Management category following nomination by TSL, leading systems integrator for the broadcast industry.

"We're delighted that IBC has recognised the technical innovation, expertise and hard work that went into the launch of Sky News Arabia," said David Phillips, Managing Director of TSL. "It's a very commendable and highly successful project and we're glad to hear that it has been shortlisted for this prestigious award".

Sky News Arabia has brought world class 24/7 news coverage in Arabic to the Middle East. It is transmitted in both SD and HD with content available online, on tablets and on smartphones. As a start-up, its production facilities represent the state of the art in television and online news, and building its new centre was one of the largest projects undertaken in the region.

Amongst other cutting-edge elements, the facility uses a modified universal bookings system by automating the scheduling and QC of all input/ output circuit bookings across Sky News Arabia's control room. As all of the station's content transfers over IP, TSL had to design a very solid IP infrastructure, while achieving broadcast standards of reliability, and allowing priorities to be set for traffic close to air time.

While the infrastructure is firmly file-based with as much emphasis on connection to social media as to ingest, the centre itself still has to operate as a highly pressurised broadcast centre, and the build, by TSL, features some of the largest monitor walls ever constructed in a broadcast station.

The IBC2012 Awards Ceremony takes place on Sunday 9 September at 18:30. As well as the Innovation Awards and Judges' Prize the programme will include the IBC International Honour for Excellence, IBC Special Award, the Best Conference Paper and Exhibition Design Awards.

About TSL
TSL is a leading creator of integrated broadcast systems. In an industry characterised by rapid growth and intense competition, the company is a consistent high-achiever and is the only organisation of its type offering truly independent advice allied to 26 years' experience in the field.
Having recently completed such high-profile projects as Phases 1 and 2 of the broadcast infrastructure at MediaCityUK, Sky News Arabia, TVNZ's new file-based workflow and media asset management system, as well as multiple fibre-based HD studios at the University of Salford, TSL has significantly broadened the scope of its services and expanded the size and complexity of the solutions it delivers.
With a reputation for forward-thinking and independent values, combined with a continued drive to address and resolve the challenges that today's growing file-based/IP-centric projects command, TSL is able to provide the most comprehensive, cost-effective systems integration capability available today.