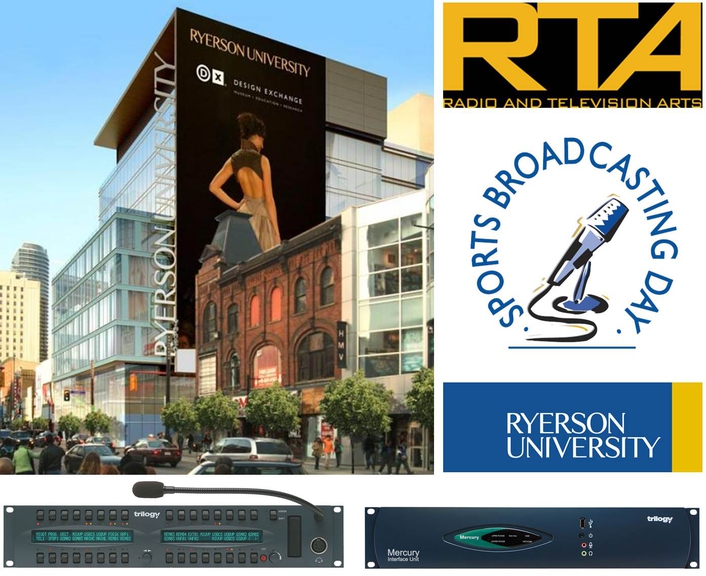 The Trilogy systems were supplied by BSE (Broadcast Equipment and Systems Inc) in three studios and connect over IP, overcoming the considerable issues of installing traditional cabling throughout the existing buildings. Each studio intercom functions independently but can also link to the other studios and MCR when necessary. Mercury provides communications between the gallery, cameramen and floor managers and allows for connection of a wide array of devices such as wireless beltpacks and In Ear Monitoring.

The studios of the RTA are housed in the Rogers Communications Centre – a learning facility dedicated to the study and research of communications and electronic media. It features a comprehensive and continuously updated array of facilities and equipment including high-definition cameras and editing equipment, fully equipped television studios, computer labs with the latest image-manipulation and creation software, multi-track audio production and post-production studios, fully equipped radio production control rooms and portable on-location video production packages.

Joe Scrivo (RTA Grad 1981), President & Managing Director at BSE, commented: “Ryerson’s School of Radio & Television Arts is a prestigious contract for BSE and we are extremely pleased to play a role in the provision of the facilities that educate the future professionals. Trilogy’s Mercury system was an obvious choice given the requirement of operation over IP combined with robust performance” “In an industry that desperately needs a steady stream of high quality people coming through to replace those who leave, Trilogy is delighted to be involved with educators like Ryerson. We are proud that the graduates will have ‘cut their teeth’ on Trilogy Intercom systems.” said Barry Spencer, General Manager at Trilogy Communications.

BSE supplies hardware and software solutions to the Canadian Broadcast Industry. Currently BSE operates four offices across Canada as well as having a presence internationally. Our head office is in Toronto with regional offices in Montreal, Calgary and Vancouver. Integration projects include various Canadian installations as well as numerous Summer and Winter Olympics, World Track and Field Events, Commonwealth Games, WWE for the armed forces in Iraq, World Poker, Beijing 2008 Summer Olympic Games and most recently the Vancouver 2010 Winter Olympics and the Commonwealth Games in New Delhi for the BBC to name just a few.