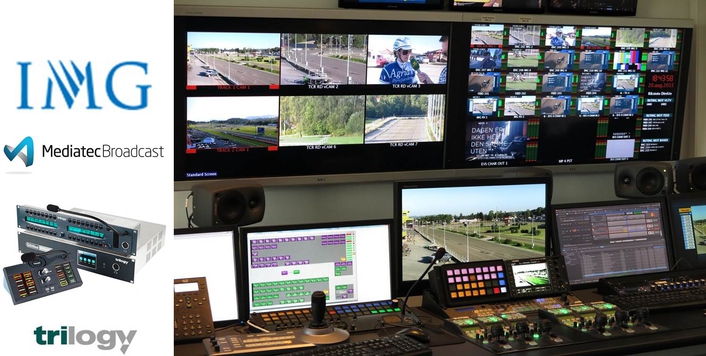 Trilogy Communications has announced that its Gemini distributed matrix intercom system has been linked by 10 km of fibre optic cable to provide the core intercom system for centralised production of multiple daily horse racing events for Mediatec Broadcast, Norway.

Mediatec Broadcast, part of the NEP Worldwide Network, is now performing live production using the capabilities of Trilogy’s Gemini matrices and high speed link (HSL) to connect its master control room (MCR) and studio facilities. Trilogy’s HSL audio network is configured as a point-to-point connection, with failover to network for all traffic if the HSL-fibre link should fail.

Mediatec Broadcast AS Managing Director Lise Heidal said, “The key point is that we wanted centralised site operation but had to ensure full audio bandwidth and near zero latency. You can’t achieve that with standard IP links 10 kilometres apart, but you can when using Trilogy’s Gemini with HSL, which worked flawlessly.”

Gemini is Trilogy’s flagship intercom system, which is built on the concept of a de-centralised, scalable platform of 32 port matrices, each with IP connectivity. For harness racing production, information from comms links with cameras, reporters, commentators, and local control rooms at the 12 horse racing tracks spread around Norway are sent to Mediatec’s MCR in Oslo. There the audio is transferred to the Gemini intercom system and made available for crews at the MCR and studio.

IMG Productions, who produce the racing packages for broadcast, has a studio control room in Oslo that also uses a Gemini linked via fibre to a Gemini frame at Mediatec’s MCR, connected via a range of embedders/de-embedders for near-zero latency, full bandwidth, bi-directional communication.

During the summer of 2015, 10 out of 12 race tracks in Norway became operational with the Gemini system. The remaining two will come online in the coming months. Over the next five years it is estimated that around 2,500 productions will be done using Gemini matrix.

Trilogy’s Sales Director Ewan Johnston said, “If it were needed, this is further proof that Gemini leads the way in remote comms over IP. In racing terms, it’s a safe bet.”

Mercury and other new Trilogy products and services, including the new VoiceFlow™ communication unit and Gemini II distributed matrix intercom system, can be seen at IBC 2015 in Amsterdam from 11-15 September in Hall 10. Stand A29.

Mediatec is now part of the NEP Worldwide Network

About NEP
NEP provides the technology and know-how to enable clients to produce the worlds’ biggest live and broadcast events around the globe. The company is the leading worldwide provider of outsourced production solutions offering technical services for remote production, studio production, video display, host broadcasting and post production. NEP’s team of over 1,500 employees are driven by passion and a focus on technical innovation, and together they have supported productions in over 65 countries on all seven continents. Headquartered in the United States, NEP has offices in the United Kingdom, Ireland, the Netherlands, Sweden, Norway, Denmark, Germany, Finland, Switzerland, Belgium, the United Arab Emirates and Australia.