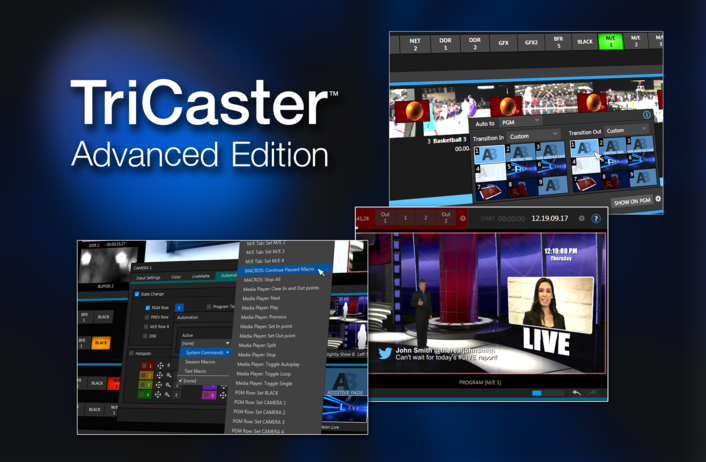 Celebro Media has a large TV studio complex in central London with three studios, another in Moscow, and is about to open a third in New York. The company specialises solely in live production, providing studio space, galleries, uplink facilities, staff and everything required to produce and transmit live content for international broadcasters including the BBC, MTV and TRT World, as well as smaller channels. It has been using TriCaster multi-camera video production equipment to produce its shows for five years, recently upgrading to TriCaster Advanced Edition, which paid immediate dividends.

TRT World reports global news from a Turkish perspective 18 hours a day. The channel produces five to six hours of live rolling news each day from its main operation in Istanbul, and its London bureau, that is facilitated by Celebro Media. During the recent attempted coup, Turkish news outlets including TRT World’s Istanbul operation were temporarily shut down and the broadcaster turned to Celebro Media for assistance.

“The management at TRT World wanted to get back on air by any means possible,” said Wesley Dodd, chief executive for Celebro Media. “We do a lot of streaming on Facebook Live, and with the TriCaster Advanced Edition’s live streaming capabilities, it was the obvious option.”

TriCaster Advanced Edition enabled TRT World to produce and stream live news reports from its London journalists via Facebook Live within a very short space of time, and later to stream to YouTube and the TRT World website. As events progressed the team was able to receive additional video reports from around the world, including Istanbul, and incorporate them into the live stream. This ‘emergency transmission stream’ rolled for approximately 15 hours, until the channel was able to get back on air in Istanbul.

“There was very limited connectivity in Turkey, so TRT World’s Facebook Live stream was something of a lifeline. The social media element also provided a way for people to communicate - there was a huge level of engagement with tens of thousands of people watching live, and then on catch-up later,” continues Dodd. “TriCaster Advanced Edition and Facebook Live enabled us to keep people informed during an important world event.”

About NewTek
NewTek is transforming the way people create network-style television content and share it with the world. From sporting events, Web-based talk shows, live entertainment, classrooms, and corporate communications, to virtually any place people want to capture and publish live video, we give our customers the power to grow their audiences, brands and businesses faster than ever before.
Clients include: New York Giants, NBA Development League, Fox News, BBC, NHL, Nickelodeon, CBS Radio, ESPN Radio, Fox Sports, MTV, TWiT.TV, USA TODAY, Department of Homeland Security (DHS), the National Aeronautics and Space Administration (NASA), and more than 80% of the U.S. Fortune 100.