.
Three-time Grammy® Award-winning American rock band Train is spending the summer on the road in the U.S. and Canada as part of their ‘Picasso at the Wheel’ tour. Joining the group is a pair of Solid State Logic L500 consoles, used at FOH, by Jason Moore, and monitors, by Rob Greene. A 15-year member of the Train audio team, first as a guitar tech, Greene has been mixing the group’s monitors since 2009. Having signed on as FOH for Train’s previous ‘Mermaids of Alcatraz’ tour, Moore has also mixed for the likes of Meatloaf, Selena Gomez, David Cook, Blake Lewis, Tonic, Grinspoon, Seven Mary Three and Sister Hazel.

The ‘Picasso at the Wheel’ tour marks the first time either engineer has used the SSL Live, supplied by LMG Touring, and both agree that the sound quality is the standout feature. “What sold me was a combination of its pre-amps and everyone saying ‘You’ve got to hear this console,’ ” explains Moore. “The sound was really the number one selling point.” 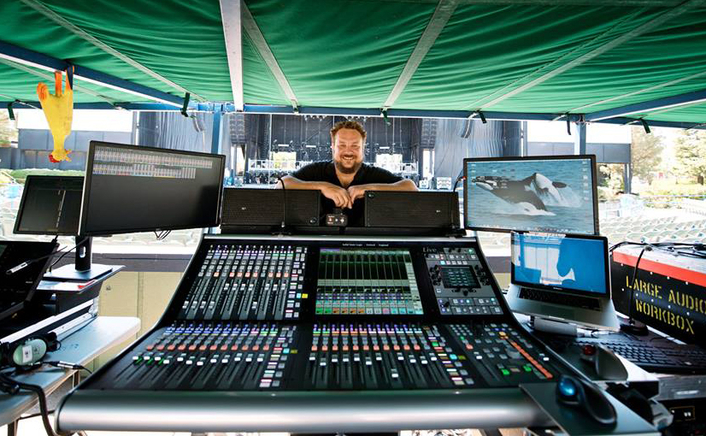 “It’s a great console; it sounds amazing and the workflow is excellent”

Moore has been making good use of the versatile console control surface layout and routing architecture. “Number two for me was the ability to customise fader tiles on the console. By being able to put a VCA, Stem, or Channel anywhere and using a Stem’s Query, it enables me to easily have all my channels arrive on the control surface,” he continues. “The way SSL approached the whole group idea with Stem Groups is also amazing; it opens the door to different ways of routing. I have two kick drum mics and I break those off into four channels with a high- and low-pass channel for each, so I have more variations in how I use my kick drum per song. Now, I can combine all four of those channels and send them from that Stem to my sub aux.”

“The ability to lay out the console the way I want has been great,” echoes Greene, whose work while Train was on hiatus afforded him the opportunity to use a variety of live sound consoles. “I love being able to put the reverb for Pat [Monahan, lead singer] right next to his vocal channel. But, my favourite part of the console is the sound quality of those pre-amps. It’s just unmatched; I can’t even compare it to any other console.”

“What’s also cool is the swap button on each tile that you can apply to any  fader bank,” Moore adds. “The swap button for the fader tile under the main screen brings up my band VCA and my main vocal channel, so I can adjust their relationship immediately. I also love the many local I/O options in the doghouse.”

Even though SSL Live has a dedicated optical MADI ‘FX Loop’ for a plug-in server, Moore isn’t using plug-ins. “I decided I wanted to ‘stay in-the-box’ and see what SSL Live has to offer onboard,” Moore explains. “As I began using it, I realized I don’t need plug-ins because it’s SSL and what’s on the console works extremely well. I’m very happy with the dynamic EQ on Pat’s vocal. I can set it up as a de-esser, but it also has more EQ bands that I can use. I’m really impressed with SSL’s reverbs. It’s a great console; it sounds amazing and the workflow is excellent.”

Since the group uses a combination of wedges and in-ears, Greene “was nervous coming into this because I’ve been working off the same show file for four years. Everybody’s on in-ears, but some people rely on the wedges as well, while Drew [Shoals, on drums] and Pat both use dual in-ears. With most consoles, it could be a challenge getting a balance with the mix of the in-ears and wedges, but not with SSL. To jump into production rehearsals with just minimal changes from the band has been great.  All of the guys are thrilled at the sound and surprised how easy it was to set up. It just fell into place; we’re rolling like we’ve been working on this console for years.”

The duo also recognises that it’s not just the technical advantages of the console that benefit their jobs; “I also want to reiterate SSL’s outstanding customer service and their desire to get feedback from real-life guys.” notes Moore. ”Knowing that I can call them at any time and get support is another big advantage.”