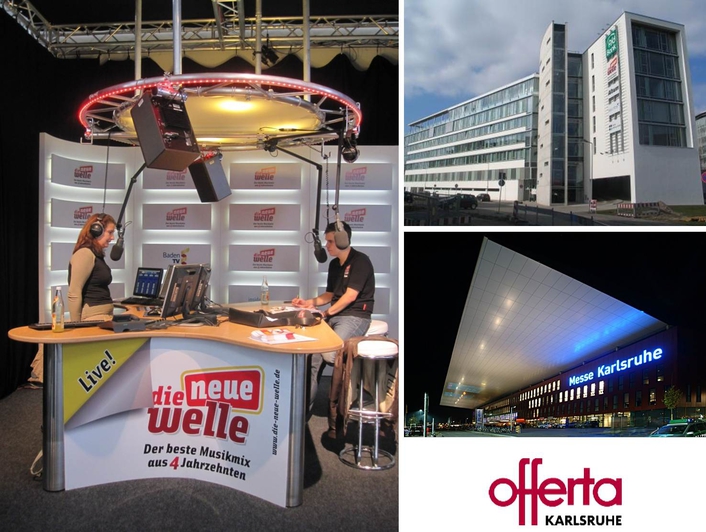 Remote controlled
Private radio station ‘die neue welle’ (‘the new wave’) broadcast from South Germany’s ‘offerta 2012’ consumer show and took the ‘live’ literally. “We produced the programme without any safety net and even without a sound engineer in the home studio,” explains Andrea-Alexa Kuszák, CEO of the local station. This project was successfully completed by means of – amongst other things – a zirkon mixing console from Lawo, based in Rastatt, Germany.

Broadcasting directly from the show over nine days offered the presenters many advantages: “Our programmes were much more spontaneous, and we could easily regionalise – ie. serve the needs of our listeners across the three frequencies used for our main regions,” says Vanja Borko, neue welle’s Programme Coordinator about the new technology. “Organisational effort was minimised, which saved us time, and we were able to access the complete neue welle music archive from the show.” Borko continues: “With the new technology we could approach visitors to the show much more directly, and so capture their spontaneous reaction during our search for unusual items; we had many opportunities to deliver interesting items to our listeners.

Technology behind the scenes
To put these ideas into practice, Technical Director Markus Bresch’s team had prepared all the studio equipment for remote control and to be virtualized. 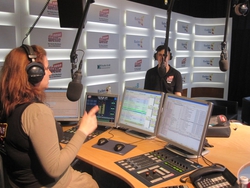 At the show, the studio looked like neue welle’s regular on-air studio, except that all the buttons, screens, keyboards and faders were remote controls, connected to the radio station eight kilometres away via a microwave link. This enabled any number of channels to be fed from the trade show studio, to provide different programmes for the various regions. An additional engineer at headquarters was not necessary; presenters were able to independently handle complete programmes from the show and operate everything as they are used to at their home studio.

Visitors to the trade show were able to follow the work of the presenters on three large screens. The broadcast schedule, the mixing console and other details, were displayed. This transparent studio setup even allowed spectators to listen to internal communications between the studio and the broadcast centre.

The remote control option is supported by a special technical capacity: Whilst the mixing console’s core, including all audio and control links, remains at the radio station, the operating surface is setup at a different location and is networked, in this case via microwave link, with the home studio (virtualisation). In the same way three combinations of screen, keyboard and mouse were virtualized via Remote Desktop software. The low-latency audio transfer was in MPEG-1 Layer 2 format.

die neue welle
‘die neue welle’ is a private radio station with high regional expertise, serving southwest Germany around the towns of Karlsruhe, Pforzheim and Baden-Baden. This local broadcaster focuses on a large variety of music from the last forty years, with selections based on regular market research and listener surveys. Competent and friendly presenters produce entertainment designed for a target audience aged 30+, based on the listeners’ local surroundings, with lots of music and local news at the heart of this format.