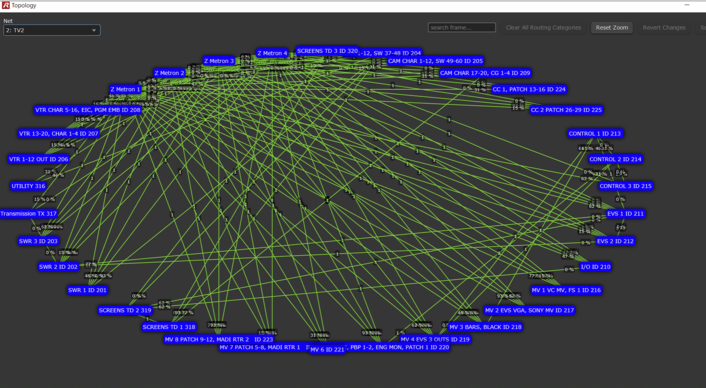 MediorWorks topography view shows all nodes in the network.

Fully embracing the concept of distributed routing, California entertainment production services provider Touring Video Inc. has outfitted its newest production truck, TV-2, with a massive signal transport, processing, and routing backbone based on Riedel’s MediorNet. Unlike most production vehicles, in which the gear is permanently mounted inside the truck, Touring Video has built TV-2 to fully leverage distributed routing with the ability to outboard gear — or even the entire control room — for entirely new levels of production flexibility.

The MediorNet signal backbone on board TV-2 has 34 nodes comprising four MetroN core routers and 30 MicroN software-defined, high-density media distribution network devices. Available MicroN Apps include standard routing, multiviewers, and additional signal processing capabilities that serve to streamline workflows and eliminate single-purpose devices. Of their 30 MicroN devices, 20 are equipped with the Standard App, eight use the MultiViewer App, and two use the Processing App. Touring Video is also a long-term Artist and Bolero user, and the new truck is no exception, equipped with an Artist mainframe and an assortment of the new 1200 Series hybrid lever key SmartPanels, 2300 Series SmartPanels, and Bolero wireless intercom. 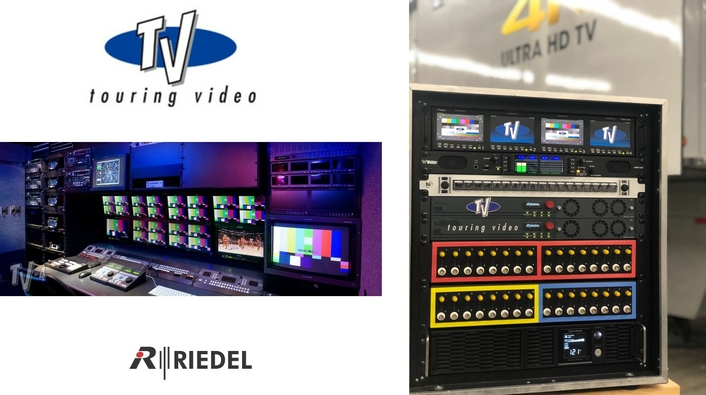 The outboarded control room can handle far more people and can be located very close to a stage.

The entertainment productions that Touring Video services differ from sports in that the needs of the show dictate the needs of the truck, and these requirements can change from day to day. One day the job could be a concert, and the next it could be a TV game show or award show. The truck needs to be as quick, agile, and responsive as possible to suit the needs of each client. For one recent entertainment show, up to 30 people were required in the control room. The ability to take the control room out of the truck and easily relocate it closer to the stage made a huge difference in production flexibility — and it was made possible by distributing the router. Now, with control room space no longer a limitation, a second 4ME switcher could be added for screen control. Three highlight operator positions and additional production staff were then easily housed in TV-2’s vacated control room. The total video I/O on the stage was 96 x 96, with audio over MADI and two tunneled Ethernet paths.

“From the start, MediorNet made these producers’ lives easier. They were able to take an audio feed from an embedded video, route it out a MADI port, and then into the audio console quicker and easier than they ever thought possible,” said Jeff Sullivan, Systems Consultant at Riedel North America. “The MediorNet backbone was field-tested for two months across six different productions, and the engineers soon found they couldn’t live without it. They found uses for almost all the integrated glue features, even using the time code overlay for ad-hoc login positions in the truck.”

Touring Video required an all-in-one solution for routing and control, and their production clients demanded a traditional-style router panel. The HI control system met that requirement, providing ember+ Pro-bel connectivity, and a shared router database between HI control and MediorNet. 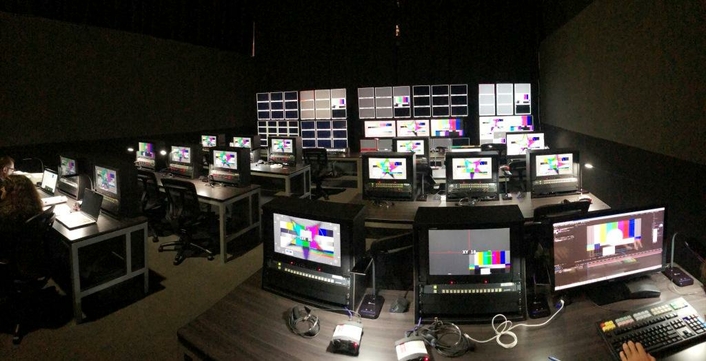 The outboarded control room can handle far more people and can be located very close to a stage.

“We deal with tech managers and network engineers who have a big say in the Hollywood entertainment market we service,” said Doug Armstrong, President at Touring Video. “MediorNet is relatively unproven in the North America OB market, and choosing it as our core routing system was a leap of faith. But I’ve been able to create the unique workspaces that my clients have come to expect from me without compromise while creating economies and streamlining workflows.”

Touring Video provides multi-camera systems and a wide range of solutions for broadcast television and digital streaming. We embrace the balance between supplying state-of-the-art equipment with experienced personnel while prioritizing the production’s needs first and foremost. With decades of experience, Touring Video has mastered the importance of forward-thinking engineering and redundancy while expressing passion and compatibility with both crews and clients.