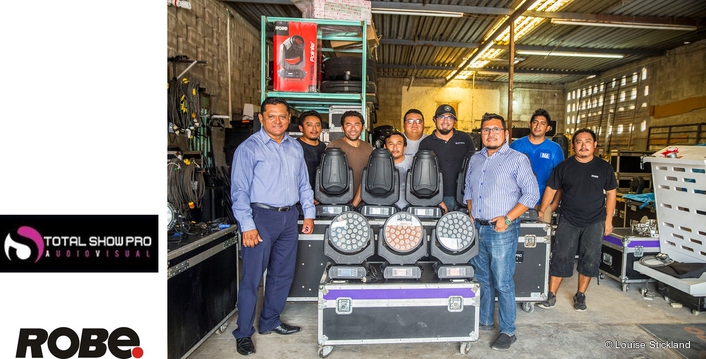 Total Show Pro team: Claudio Pasos (in striped shirt) at the front on the right with some of his crew, including commercial director Francisco Uribe Vasquez on the far left (in light blue shirt).

Merida, the capital of Yucatan State in Mexico is a thriving, buzzing hub of culture and industry, rich with Mayan and Colonial –- Spanish, French and British – heritage and a lively contemporary arts and live performance scene, lots of greenery and arguably, the best ice cream in Mexico!

Based on the north west of this picturesque city is Total Show Pro, a full technical production company delivering lighting, sound, video and staging - design and equipment - founded by Claudio Pasos four years ago. Shortly after this they invested in their first Robe moving lights with 10 x LEDWash 600s and then in 2015 added 10 x Robe Pointes to the inventory.

There are three main project divisions to the company, the first one deals with weddings, which is a massive business in the area with so many beautiful locations and architectural masterpieces as well as the Gulf of Mexico coast only 35 kilometres away.

The second division deals with the corporate event and brand activation marketplace, which is also extremely busy for all the same reasons – the fabulous places, buildings, gardens and event spaces plus the great energy and vibes of the city – everyone wants to be in Merida!

The third sector in which the company is actively engaged is providing productions for live shows, concerts and music festivals.

The warehouse is just 5 minutes out of the bustle of the old town city centre and they now have 18 full time staff and naturally, a regular team of freelance technicians.

The LEDWashes were first bought to service the weddings market, and then the Pointes were added specifically for concerts and music shows, where they were increasingly appearing on artist riders.

Claudio  – whose industry career started aged 12 drumming in a band - has been familiar with Robe since the brand first started, going right back to the XT series and then the AT series.

The popular music group, Banda Ysrael who are still very active in the Yucatan area – even bought a set of white ColorSpot 575E ATs to enhance their shows for weddings.

So, when Total Show Pro started and became successful, he decided to carry on with Robe.

“It’s the best decision I have made” he states emphatically.

He likes the brightness and colour mixing of the LEDWashes together with its low power requirements – always helpful for some of the local wedding venues!

On the Pointes, he likes the intensity, the zoom, gobos and prism. They are his favourite moving light right now!

When Robe launched the Pointe, he was looking for a spot fixture with “beautiful gobos” … and once he had thoroughly road tested the fixture, he knew it was the right decision.

The Pointes are used on all Total Show Pro’s high profile projects – although there are alternatives available, for the leading projects Claudio uses only the Robe movers.

Having been familiar with the brand for over 12 years he comments, “The fixtures are definitely getting smaller and lighter – there’s more space in the warehouse and in the trucks – while the brightness and power is increasing constantly”.

He believes that the potential for premium corporate event clients is increasing in Merida and the region and he’s hoping to be able to increase his Robe stock very soon.

Initially Total Show Pro was the only production rental operation in Merida with any Robe stock, but now the ball has started rolling and others are also purchasing … so he is also hoping to forge an alliance with other local companies so they can kick-start a cross rental trade for the benefit of all.