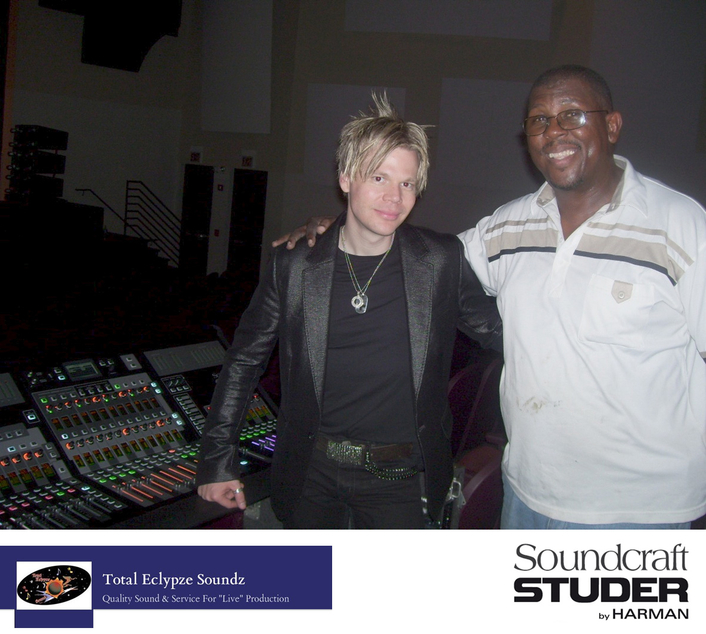 Musician Brian Culbertson (left) with Victor Harris of Total Eclypze Soundz
From a demo of a Soundcraft Si3 digital console one year ago, to purchasing an Si2 console for events across the Midwest, Victor Harris of Total Eclypze Soundz is living his dream by providing superior live sound for a variety of events. Since bolstering his company’s inventory with the Si2, Harris has supported hundreds of successful live events in Illinois and surrounding areas.

After a successful mixing gig following an Si3 demonstration, Harris knew a Soundcraft board would be the ultimate accessory in his live sound inventory. As a guitar player, Harris used to mix his own sound while playing local gigs. Soon enough, his fans became clients and he began providing sound services at local events such as conferences, concerts, church events and recording sessions. Ultimately, the volume of service led Harris to establish Total Eclypze Soundz in 1991.

Harris’ first experience with a Soundcraft console took place at a Buster Woods and G3 gospel concert at the Auditorium Theatre in Chicago, where he mixed on an Si3. After the event, Harris snapped a photo of the board for inspiration--a token to remind him that a Soundcraft console would bring his company’s reputation and client satisfaction rate to an entirely new level. He eventually purchased the Si2, giving him the same features and benefits of an Si3 with a smaller footprint.

“I took that picture on July 31, 2009 and a year later, I’m the proud owner of a Soundcraft console,” said Harris. “The Si2 allows me to bring my A-game to every gig, exceeding clients’ expectations. If I didn’t bring my best, my business would be crushed.”

The major selling point of the Si2, according to Harris, was its ability to ease an engineer’s transition from analog to digital--providing all the advantages of digital technology, while offering the ease of use and intuitive functionality of an analog board. “If you give me five minutes with an engineer who hasn’t worked on the Si2, I could make him an expert. It’s that simple,” continued Harris.

Total Eclypze Soundz has an extensive array of Harman equipment in its live sound inventory including products from BSS, Crown, dbx, JBL and Lexicon.

“My clients trust I won’t embarrass them or myself in the process,” continued Harris. “In this business, you build your reputation of trust through the quality of your work. I trust the Si2 and the complete line of Harman products, and my clients trust me to deploy them.”