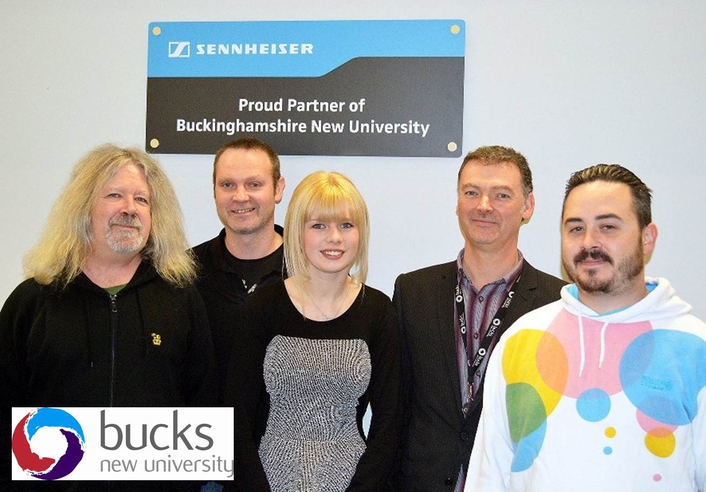 .
Buckinghamshire New University and education partner, Sennheiser UK Ltd, have held a panel debate featuring top music industry specialists. The debate, held in front of around 40 prospective students and parents, was part of an undergraduate open day at the University, in Queen Alexandra Road, High Wycombe.

The panel included live sound engineer, producer and promoter, Sean Ôramptonõ Cranny, also known as Rampton, who works with DJs, Chase and Status, and has enjoyed a 30-year career working with the likes of Basement Jaxx, The Libertines, and Razorlight; producer, designer and engineer, Chuck Knowledge, who has produced three award-winning albums for Dizzee Rascal, and worked with Taio Cruz, Calvin Harris, Jay Sean, and Tinchy Stryder, as well as the likes of Bush, The Divine Comedy, Hootie & the Blowfish, and Stereophonics; Chris McCarron, who is front of house engineer for Razorlight and is a director of the firm Silentgig Ltd; as well as Phil Cummings, Sennheiser’s Marketing Projects Manager.

Frazer Mackenzie, Head of the School of Production & New Media at Bucks New University, said the debate had provided an opportunity for prospective students to gain an idea of the industry links offered through courses at the University.

"Applicants and parents enjoyed the chance to meet leading industry professionals, and had plenty of time to ask about our courses and hear about how building a career in this industry really works,” explains Frazer. “They were also able to see and hear some of Sennheiser’s cutting-edge digital audio technology that is revolutionising the way in which audio and music is recorded and distributed.

“At Bucks New University, we think it is important to give all our course applicants as much information and advice as we can to help them make the right higher education choices.  We also want to give them the best possible insight into what it’s like to be a student at Bucks. The open day music industry panel, sponsored by our long-term partner Sennheiser, was a perfect platform for this.”

“Sennheiser is proud to be involved in being able to organise three key professionals from our industry to talk to prospective students,” added Phil. “This is a great way for us to engage more with the University and we gained some brilliant feedback from the day.” 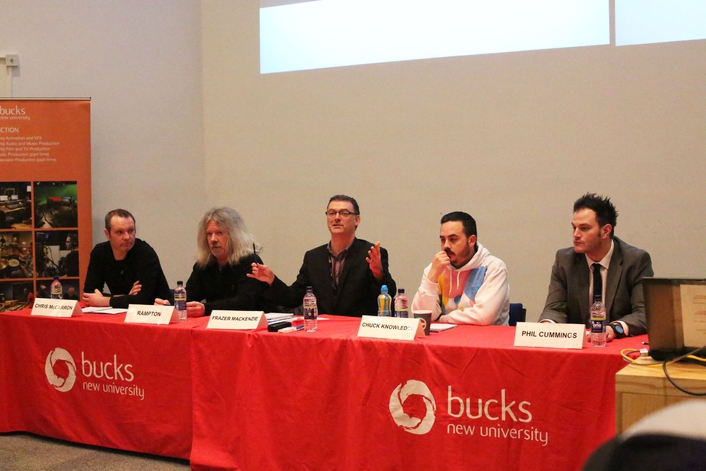 Panellists used Sennheiser’s recently launched Digital 9000 wireless system for the event and gave away a pair of Sennheiser MOMENTUM headphones worth £300 to a lucky raffle ticket winner.

The educational partnership between Sennheiser and Bucks New University, which was launched at the beginning of the year, provides a series of educational benefits for students, and has included renaming the University’s main recording studio ‘The Sennheiser Sound Lab’, with the company providing a range of equipment for use in the studio, including state-of-the-art digital microphones.

Sennheiser is also offering a scholarship, starting annually from September 2013 and worth £3,000, to a talented second-year student studying BA (Hons) Audio and Music Production.

Other elements to the partnership include organising an ‘industry insider’ day, in either the live or broadcast market, for the second-year BA (Hons) Audio and Music Production student with the best academic performance in a year. The partnership will also facilitate work with current students, staff and alumni, to develop a wide range of online media assets for the company.

Buckinghamshire New University has enjoyed a long and successful history since it was founded in 1893. The University now offers an extensive portfolio of courses spanning the creative and cultural industries, the management and information management sectors, and the public sector. It also offers services to industry including contract research, consultancy and the opportunity to employ graduates.The University has completed a major campus re-development programme, which saw the opening of: a new state-of-the-art building in High Wycombe known as the Gateway and comprising a learning resource and technology centre, events hall, gym, sports science laboratory, dance, drama, music and video production studios, library and meeting rooms; new student accommodation in High Wycombe; and a new base for nursing students and applied healthcare research in Uxbridge, West London.