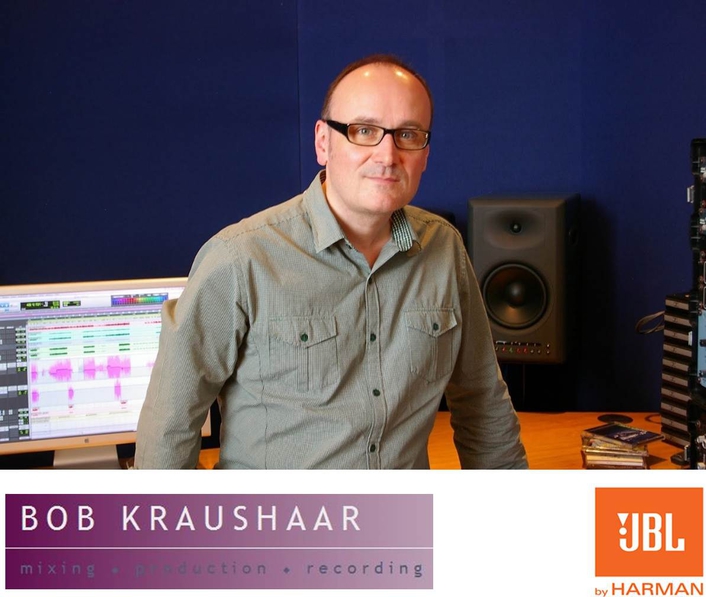 After acquiring JBL LSR4300 Series studio monitors, producer/engineer Bob Kraushaar stated: “I wish I’d had these years ago.”
Top British producer and mixing engineer Bob Kraushaar has worked with some of the finest artists over the years, including Pet Shop Boys, Elton John, Tom Jones, Gang Of Four, Gary Barlow and Paul McCartney, having begun his career alongside the legendary Trevor Horn at the highly influential SARM Studios. Recently engaged on mixing Pet Shops Boys’ The Most Incredible Thing ballet CD and Honey Ryder’s latest album, Kraushaar hasn’t got where he has without developing a finely-attuned set of audio ears.

The LSR studio monitors were recommended by producer Jon O’Mahony, who owns the 6-room LA Sound Studios in Acton, UK, where Kraushaar’s studio has been based for the past seven years.

“Instead of traveling around to different studios, the great advantage here is that I am listening to the same sound every day—there’s no need to adjust to the acoustics of the room,” Kraushaar said.

His existing monitors provide good detail in the top end and midranges… but all seemed wanting in the lower registers. “The lack of low-end definition had been niggling me for a while and I had been looking for the kind of sound the JBL’s deliver,” Kraushaar noted. I have tried a lot of different speakers over the years to achieve that but for whatever reason they didn’t work—until I discovered these, and realized just how deep they go.”

In fact Jon O’Mahony had “discovered” the sound on a visit to Ocean Way Nashville Recording Studios recently, and immediately reported his findings to Kraushaar. “They had the same JBL’s, and he thought they sounded amazing,” O’Mahoney observed.

“Jon told me that in a nearfield shootout they had won hands down,” Kraushaar said. “Initially I was a bit skeptical, so I decided to investigate further.”

Kraushaar contacted Batmink, who in turn arranged for Sound Technology Ltd, JBL’s UK and Ireland distributors, to provide a demo rig for evaluation. It didn’t take Kraushaar any time to make his purchasing decision. “Speakers either work in a room or they don’t—and the great thing about the JBL monitors is that they have Room Mode Correction (RMC) technology. The system comes with a microphone which you plug into a master speaker and it does a frequency sweep and EQ’s it accordingly.”

The RMC automatically analyzes and corrects the low-frequency response of each speaker in the room for increased accuracy in a broad range of acoustic environments. The built-in intelligence means that no matter what the acoustic properties of the environment, the LSR 4328s will deliver an accurate mix. The magnetically shielded speaker system consists of an 8-inch polymer coated woofer and 1-inch soft dome tweeter coupled with 220 watts of bi-amplification to meet the requirements of today’s demanding production styles.

After trying several different EQ settings Bob Kraushaar was thoroughly content. “This system is all about the bottom end and the clarity,” he said. “It’s extremely warm and deep, clean and informative—with an even tonality at different levels. In fact, you can turn them down and they still sound warm.”

In summary, he said, “These monitors tell me way more than any giant pair of speakers I have come across in a control room ever did, and JBL should be making a huge fuss about them—in fact I wish I’d had these years ago.”