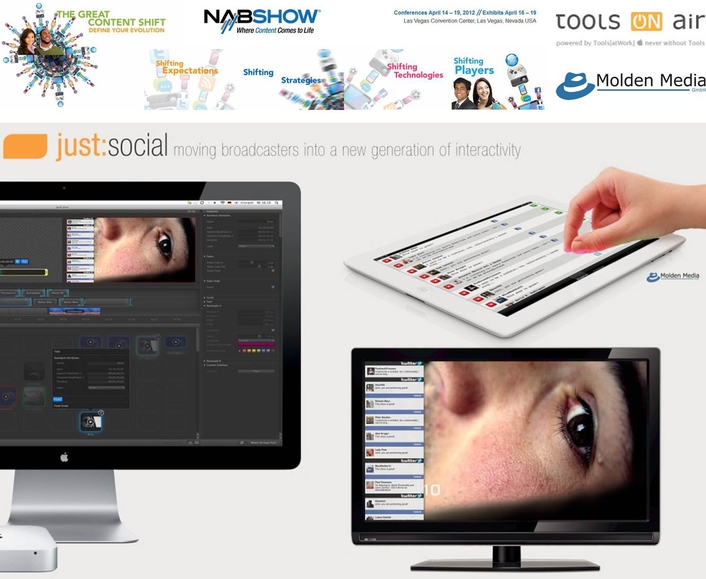 Molden Media and ToolsOnAir will demonstrate the power of just:social at Booth SL8108
ToolsOnAir  has announced the latest in a series of powerful collaborations to enhance their highly acclaimed just: Broadcast Suite of multichannel production tools for video broadcast professionals.

In cooperation with Munich-based Molden Media GmbH, ToolsOnAir will be introducing just:social, the first application of its kind for integrating interactive social media into broadcast and IPTV. Based on ToolsOnAir's proven real-time graphic engine, just:social provides a comprehensive toolkit of social media integration for video broadcasters.

With the astronomical growth of tablet users, the TV screen is no longer the dominant force in the living room," remarked Gilbert Leb, VP of Sales and Marketing for ToolsOnAir. "The increasing prominence of interactive second-screen applications has created a tremendous opportunity to bring TV as we know it from a passive medium into a truly interactive one."

As Molden Media's Thomas Molden explains, the near-instantaneous nature of social media communication presents its own set of unique challenges for integration into real-time broadcast. "Social media integration will often be used only for a single show or live broadcast event," says Molden. "Traditionally the expense of integration has made it cost prohibitive for all but a few large-budget applications. Our just:social collaboration with ToolsOnAir provides a powerful, yet affordable platform utilizing ToolsOnAir's proven timeline-based playout technology."

With more than 300 playout channels in over 60 countries, ToolsOnAir's just: Broadcast Suite has gone beyond the much-lauded "Channel in a Box" concept, creating a powerful and cost-effective "TV Station in a Mac Mini" that utilizes off-the-shelf Apple hardware and multi-channel I/O interfaces from companies like AJA and Blackmagic Designs.

"Social media integration is already proving to be a powerful force in moving broadcasters into a new generation of interactivity," says Leb, pointing to Swiss TV broadcasters JOIZ as a prime example. "JOIZ has already been implementing playout and real-time graphics implementation with just:live and just:play for more than a year,  and they are presently rolling out full interactivity as the next step in their broadcast strategy."

Molden Media and ToolsOnAir will demonstrate the power of just:social at Booth SL8108 at this year's NAB Show in Las Vegas