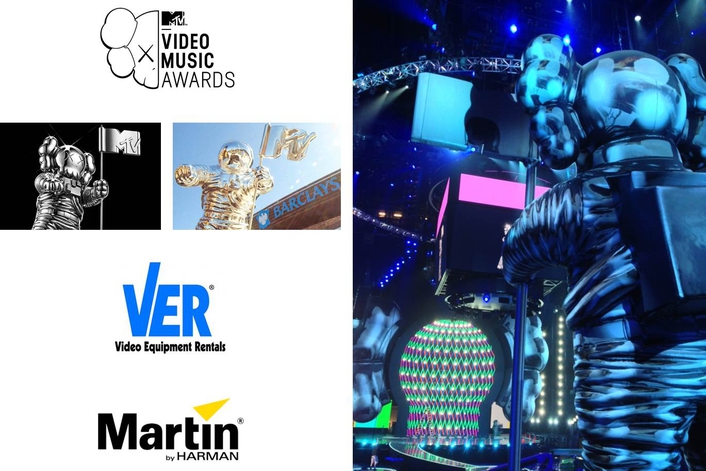 .
With widespread continued talk on the winners, exciting performances, band reunions and the outfits of those attending, the 2013 MTV Video Music Awards was another spectacular event held at the year-old Barclays Center in Brooklyn.  Looking to deliver world-class lighting in the state-of-the-art venue, Tom Kenny was contracted to design an equally impressive light show to entertain thousands in attendance and millions watching at home. HARMAN’s Martin lighting fixtures, supplied by VER, lined the stage and house, providing a multi-function professional lighting rig.

Kenny, whose illuminating résumé includes lighting design for David Bowie, Eric Clapton and The Who, among others, has been working in and around VMAs production for more than 20 years – designing the lighting for the main show for the better half of a decade. Working with the creative minds of the artists and their own creative production teams, including Brooklyn artist KAWS, who also designed the new MTV Moonman award, Kenny imagined a tremendous design for the arena and its two-stage setup.

More than 100 Martin MAC Auras shined on the diamond-base main stage for performances and presentations. Weight was a major issue with the rig, so the lightweight, functionality and quality of the Auras were a top aspect in Kenny’s design. “We had a lot of lighting throughout the entire show and it was important to keep the rig functional and safe. The Aura’s multi-function capabilities, processing and its beautiful colors were flawless, which was evident during the live show,” Kenny stated.

Another 100 Auras were used as house lights to help radiate the fashion and style of the celebrities in the audience, while numerous Atomic Strobes were used to provide more “flash” to the winners as they were announced and walked up to the stage from the audience.

“We wanted something 21st century, something turnkey that would work flawlessly,” Kenny continued. “With the Martin lights, we could have been producing in a Broadway theatrical sense or a rock show, both of which we intended to present with the lighting. From the first shot of the live show, everyone in the world was watching. It had to be, and it was perfect.” 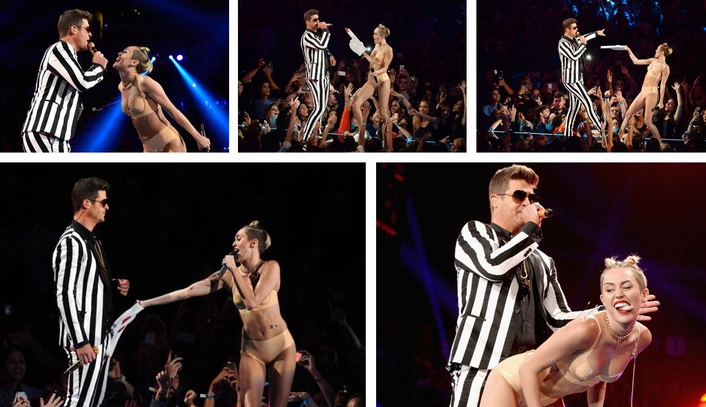 Assisting Kenny throughout the design, deployment and live phases were Mike Appel and Mike Grimes. Florian Wieder designed the VMAs, the Art Director was Tamlyn Wright and Den of Thieves, Jessie Ignatovich, Jen Jones and MTV Productions produced the show.

Founded in 1987 and headquartered in Aarhus, Denmark, Martin Professional is a world leader in the creation of dynamic lighting solutions for the entertainment, architectural, and commercial sectors. Martin lighting solutions are industry standard on top tours and events, grace prestigious theatres, energize nightclubs and decorate major television studios around the globe. Other important areas of application are indoor and outdoor architecture and commercial applications where Martin products are increasingly being used to transform spaces with dynamic light. Martin also offers a range of advanced lighting controllers and media servers, as well as a complete line of smoke machines as a complement to intelligent lighting. The company operates the industry’s most complete and capable distributor network with local partners in nearly 100 countries.  Martin Professional joined the HARMAN families of category-leading technology and lifestyle brands in March 2013.

HARMAN (www.HARMAN.com) designs, manufactures, and markets a wide range of infotainment and audio solutions for the automotive, consumer, and professional markets. It is a recognized world leader across its customer segments with premium brands including AKG®, Harman Kardon®, Infinity®, JBL®, Lexicon®, and Mark Levinson® and leading-edge connectivity, safety and audio technologies. The company is admired by audiophiles across multiple generations and supports leading professional entertainers and the venues where they perform. More than 25 million automobiles on the road today are equipped with HARMAN audio and infotainment systems. HARMAN has a workforce of about 14,000 people across the Americas, Europe, and Asia and reported sales of $4.3 billion for the fiscal year ended June 30, 2013.