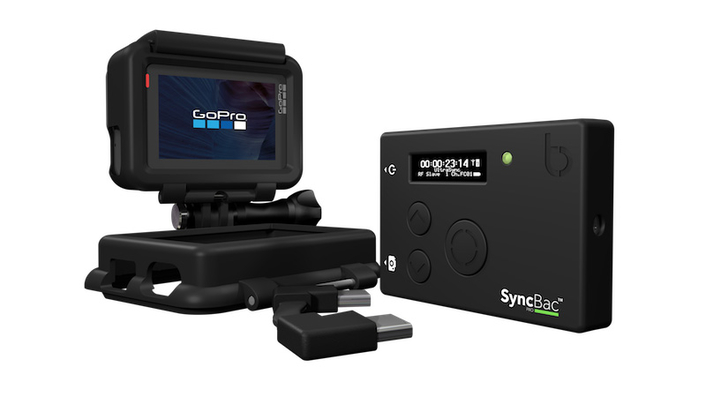 Timecode Systems, a pioneer in wireless technologies for sharing timecode and metadata, today announced the release of the SyncBac PRO for GoPro® HERO6 Black cameras, a customised timecode-sync solution for the newest generation of GoPro action cameras.

Using the same transformative timecode technology as the original SyncBac PRO, this latest release from Timecode Systems has been remodelled to work seamlessly with the new GoPro HERO6 Black camera.

By enabling the HERO6 to generate its own frame-accurate timecode, the SyncBac PRO creates the capability to timecode-sync multiple GoPro cameras wirelessly over long-range RF. If GoPro cameras are being used as part of a wider professional multicamera shoot, SyncBac PRO also allows GoPro cameras to timecode-sync with professional cameras and professional audio devices using Timecode Systems products for timecode. At the end of a shoot, the edit team receives SD cards with frame-accurate timecode embedded into the MP4 file. Eliminating the need to align content manually, SyncBac PRO makes it quicker and easier to transfer footage directly into the edit timeline for a swifter and far more efficient postproduction process that delivers huge cost savings.

Time savings of around 85 percent are being achieved in postproduction as a result of using SyncBac PRO, but it's not just editors who appreciate the benefits that synchronisation offers. The creative freedom SyncBac PRO allows on set means everyone from the camera operators to the artists in front of the camera feel the benefits.

"With SyncBac PRO generating timecode for GoPro cameras, there's no need to disrupt the creative flow of filming in order to slate cameras manually, so everyone on set or location can concentrate on capturing the innovative content that makes incredible television and films," said Olivia Allen, global sales manager for Timecode Systems. "Our system fits perfectly into a world where just about any camera angle can now be utilised. By significantly reducing time at the point of acquisition and in postproduction, SyncBac PRO makes GoPro cameras a genuinely low-cost way for professional production teams to capture additional, unique camera angles."

The SyncBac PRO is a custom-built product for the HERO6 camera. Close work with GoPro has allowed Timecode Systems to connect directly with the camera's technology to develop an innovative solution that makes the cameras more compatible with professional multicamera production methods.

"With the HERO6, GoPro has added features that considerably advance camera performance and image quality, which increases the appeal of using GoPro cameras for professional filming for television and film," said Ashok Savdharia, chief technology officer for Timecode Systems. "SyncBac PRO further enhances the camera's compatibility with professional production methods by adding the ability to integrate footage into a multicamera film and broadcast workflow in the same way as larger-scale professional cameras."

SyncBac PRO remains the only timecode generator and sync solution that works with GoPro cameras; there is no alternative on the market. The new SyncBac PRO for GoPro HERO6 Black will start shipping this winter, and it is now available for preorder.