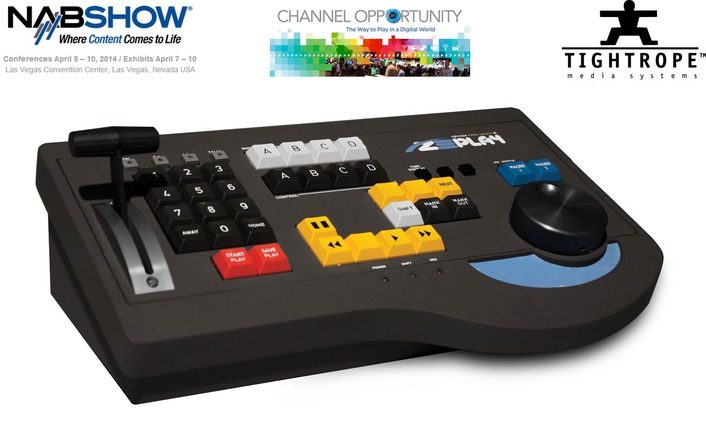 At NAB (Las Vegas Convention Center, April 7-10, Booth C6508), Tightrope will introduce a new 2x2 version of its tried-and-true ZEPLAY slo-mo instant replay solution for sports production.  The new version brings the same rock-solid stability, ease of use and expansive feature set of its 4x4 sibling at a much lower cost of entry – as in roughly half the price.

“We have found that many customers don’t require the four-in, four-out, eight-angle support that our original ZEPLAY solution offers,” said Steve Israelsky, broadcast solutions lead, Tightrope Media Systems.  “A large cross section of our customer base in the local cable market was being underserved in this sector.  The 2x2 ZEPLAY gives these and other customers, including small-to-mid sized venues and colleges, an affordable, feature-rich and reliable solution to enhance the sports fan experience.  It also gives our 4x4 customers another option if they want to add more angles at a lower price.”

Both ZEPLAY units will incorporate new features for NAB that are available in the ZEPLAY 3.0 release, scheduled for right after the show.  This includes a new export feature that allows production staff to export entire multi-angle sequences as opposed to individual clips, making it easier to share engaging content – and game-changing moments – immediately in an edited sequence as opposed to a series of individual clips.

ZEPLAY 3.0 also adds a number of operator-oriented refinements to the sequence editor.  Individual clip speeds across sequences have always been variable, allowing operators to show play highlights from one angle at full speed; and then show the culmination of the play in slow motion from a different angle.  ZEPLAY users can now specify a default rate for the entire sequence, and then modify that speed from the T-Bar as the sequence plays out.  ZEPLAY 3.0 also includes an enhanced audio capability to assist in editing the highlight sequences, as well as improvements in the storyboard and editing window layouts.

Foremost, the incorporation of H.264 streaming vastly improves compatibility for multiplatform delivery.  The main benefits are twofold:  consumers can easily watch PEG channel content on tablets, smartphones and other mobile devices; and station engineers can cleanly monitor playout on these same devices, as opposed to being tied to a desktop station.

“The evolution to H.264 streaming means that broadcasters, including PEG channels, can deliver more streams at higher quality to more viewers, thanks to exceptional bandwidth improvements and compatibility across more playout devices,” said Israelsky.  “The ability to deliver important local content to more viewers is a benefit both to the station and the community.  It is a feature that many PEG channels are ready to incorporate as they more aggressively work to expand audiences in the digital TV age.”

Additionally, Cablecast 5.3 adds AFD support to automatically and seamlessly present on-air content across 16:9 and 4:3 screens in the most attractive manner, without awkward cropping and reformatting.  This ensures that content looks great on screen without the need for expensive up, down, cross and aspect ratio conversion gear.

Tightrope has also enhanced its built-in RAID monitoring solution for Cablecast, reporting potential issues directly within the user interface – alerting customers well in advance of potentially devastating events.  The service also automatically backs up database content and information to the cloud for quick restoration in the event of a critical error.

Finally, the new Cablecast 5.3 release also expands compatibility with routing switchers, adding support for Snell/Pro-Bel and Aja routers.  This raises the number of routers supported within Cablecast to near 100, ensuring that customers can control routing traffic, stream playout and more for a tighter overall workflow.