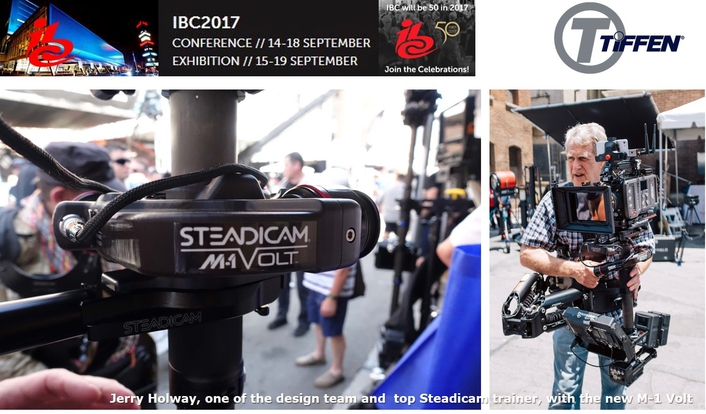 Tiffen International products and people will be on the Flowcine stand 12C75 and on the Aaton-Transvideo stand 12F30 at IBC 2017, RAI Convention Centre, Amsterdam; exhibition 15th -19th September 2017

Robin Thwaites, International Director of Sales at Tiffen International, Pinewood Studios, is also a top level Steadicam trainer “The M1-Volt is like an horizon assist, because it helps you by holding the post vertical while you make your moves. It’s been done without the addition of heavy motorised gyros.  It’s simple but incredibly effective.”

“It drives directly on to the gimbal on the roll and tilt axes, so it holds the roll, and the horizon stays stable. It will also hold the tilt, but because the software is very clever, it’s variable, and it does mean that you can tilt the whole post and keep your horizon level. With the M-1 Volt, previously difficult moves like whip pans become easy to achieve.”

See the M-1 Volt on display and demo on stand 12C75, the Flowcine stand, along with other Tiffen products, with static displays also on the Aaton-Transvideo stand 12F30. Tiffen International team members will be on both these stands during the show, including Terry Carey, Robin Thwaites, Danny Dunning and Filter Guru Eren Ibraham.

There are two more important new Steadicam products to highlight. The first is the new 3 section post. When the M-1 was introduced a lot of users said they  would like a slightly longer post so they could go lower in low mode. So Tiffen have now made a three section post. You just replace the two section post with the three section.

The third new Steadicam product is the Three Section Arm. The Steadicam arm is normally 2 sections. The new third arm section is literally a half of a G-70x arm, which in conjunction with the Exovest attaches on to your back and allows you to get one complete section of extra height movement on range, from high to low in one hit rather than having to make any adjustments. That means that if you put the camera in low mode typically you’re going to be able to do a shot which is pretty well from knee height up to eye level.