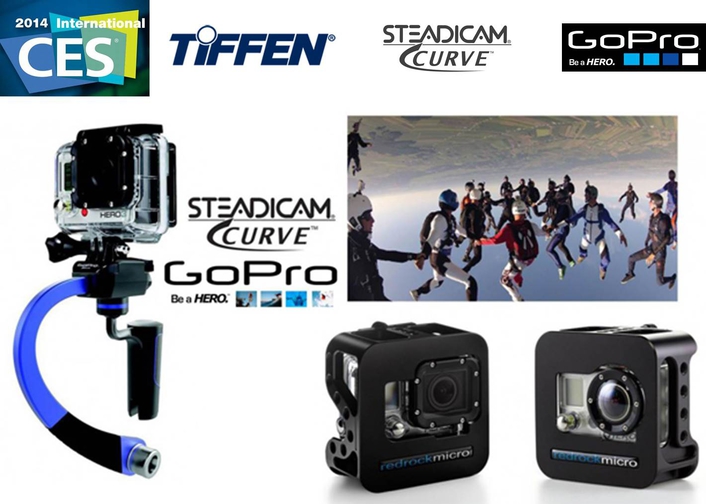 Making its official launch at CES 2014 in Tiffen booth 9143, which is located right next to the GoPro booth in Central Hall, Steadicam CURVE for GoPro HERO is a stealth camera stabilizing system from the Academy Award-winning Steadicam family of products. Designed for action-packed, one-handed GoPro HERO camera shoots, Steadicam CURVE weighs in at a mere half-pound. Its compact form factor gives GoPro HERO users the freedom to shoot shake-free video using Steadicam’s legendary stabilization technology with clever options to lock the camera to frame, using it as a handgrip for rock-solid performance on the wildest of adventures. The compact handle folds up small enough to fit in a pants pocket.

“At Tiffen, every product we manufacture has one single purpose – to help create the world’s greatest images. We have held this steadfast focus for more than 75 years and the commitment has translated into innovative products that pioneer new paths in image making, delivering outstanding value and performance for both consumers and professionals,” says Steve Tiffen, President and CEO, The Tiffen Company. “Steadicam CURVE for GoPro HERO is the perfect example of this philosophy: the same award-winning technology used in Hollywood is at the very heart of the CURVE™ system, giving the GoPro community a product that can take their impressive videos to the next level. And GoPro HERO users couldn’t be more excited. These action sports enthusiasts are shooting some of the world’s most amazing material, and thanks to the Steadicam CURVE for GoPro HERO, those wild moments are captured with a steady hand.”

The groundbreaking development from Steadicam, which was announced earlier this year, has already gained industry recognition for its one-of-a-kind design. In July, Steadicam CURVE for GoPro HERO received Dealerscope’s CE Week Line Show 2013 Best in Show Premier Product award in the Digital Imaging category. In choosing the winners, Dealerscope Editor-in-Chief Jeff O'Heir chose winners based on unique product design, quality build, exceptional user experience, and practical and sensible features, among other criteria. This past November, CURVE™ also earned an honorable mention from NewBay Media for its Product Innovation Awards, which recognizes excellence in manufacturing, praising some of the industry’s most innovative new products that serve TV, professional video and broadcast/online radio users.

About Steadicam®
The introduction of Steadicam® in 1976 revolutionized the world of film and video. Over the past three decades, Steadicam® has been an invaluable, dynamic production tool in the industry. New generations of Steadicam® Camera Stabilizing Systems have been comprehensively redesigned to unleash endless creative possibilities. Tiffen is committed to support the needs of the motion picture, broadcast and professional imaging industries with the latest state-of-the-art Steadicam® technology to meet your film and video needs.