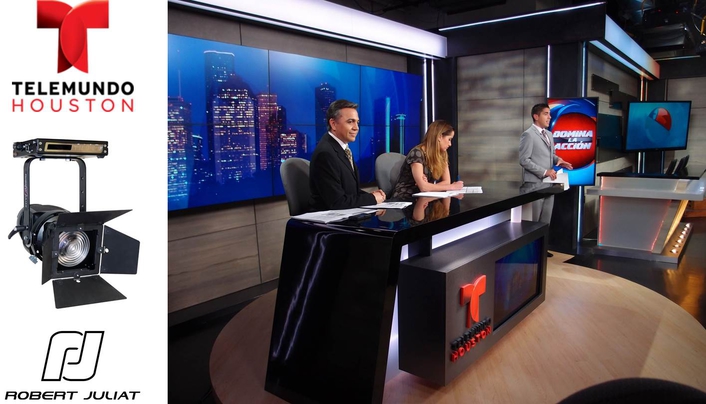 Aleksander did a complete digital solid-state lighting installation for a new studio layout he designed that’s dedicated to news programming.  “Everything was predicated on energy-efficient lighting from the start,” he explains.  “Since it was new, we were able to build out the studio without the traditional heavy support for cooling down the lights and the full dimming load normally necessary for an incandescent approach.  We used all fluorescent and LED lighting.”

Aleksander evaluated a number of fixtures then concluded that “for hard-edge, profile fixtures, the best bang for the buck came from the Robert Juliat TIBOs.”  The TIBO 533 75w LED Profile offers a high-intensity LED array, double condenser optics and extremely low energy consumption. The fixture represents a new look in LED Profile design with a compact, aesthetic silhouette.

The eight TIBOs, which Aleksander obtained from Barbizon Light of Texas, serve primarily as set accent lights.  “There are a number of logos and graphic elements on the set, and the TIBOs are perfect for picking them out,” he says.  “Where some panels in the background are not well detailed, we used the TIBOs with defocused projection patterns to add texture and shape.” 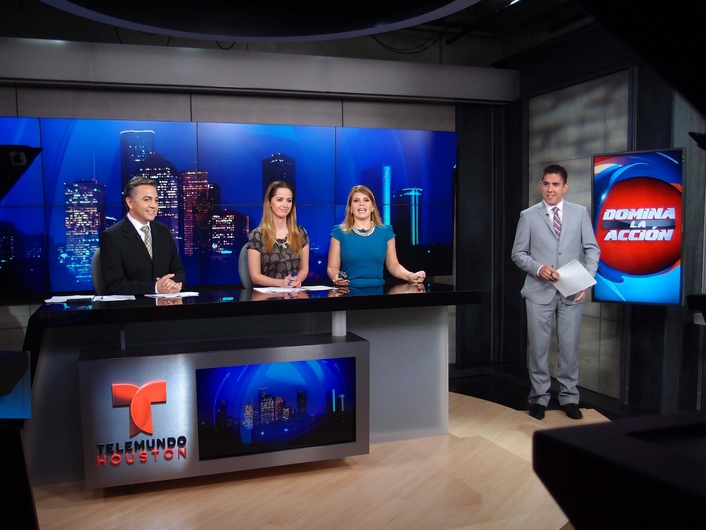 Aleksander selected daylight-balanced TIBOs for “a much closer match for the video display walls, which are an integral part of the set.”  In addition, the daylight-balanced fixtures were chosen because one wall of the newsroom is open with windows “and we wanted to match color temperatures so what the camera sees consistently carries proper color. We also needed to match color temperatures to insure the cameras could be properly white-balanced."

In reviewing a number of LED profiles on the market Aleksander says “the very high optical quality of the TIBOs distinguished them” from other fixtures.  “The patterns projected sharply, the focus was smooth and the beam of light was beautifully consistent edge to edge.  With a number of other brands out there, I can look at their fields and see the unevenness where they weren’t able to blend the different emitter fields.  But the Juliats have a smooth field and a very even focus field across the entire beam.”

“Not all LED manufacturers have done nearly as well as Robert Juliat,” he notes.  “The TIBOs really exceeded my expectations for an LED profile fixture.”

Chris Boyd was the sales person at Barbizon Light of Texas; Robin Crews was the representative at Spectrum Lighting.  At KTMD-TV Todd Taylor is the director of technology.

R&D, production, and company headquarters are based in the village of Fresnoy-en-Thelle, 50 km north of Paris.  Robert Juliat USA is located in Wallingford, CT.