Three AKG DMM 4/2/2 Digital Automatic Mixers Form The Backbone Of A Complete Harman Prof. Upgrade At The US Embassy In Macedonia 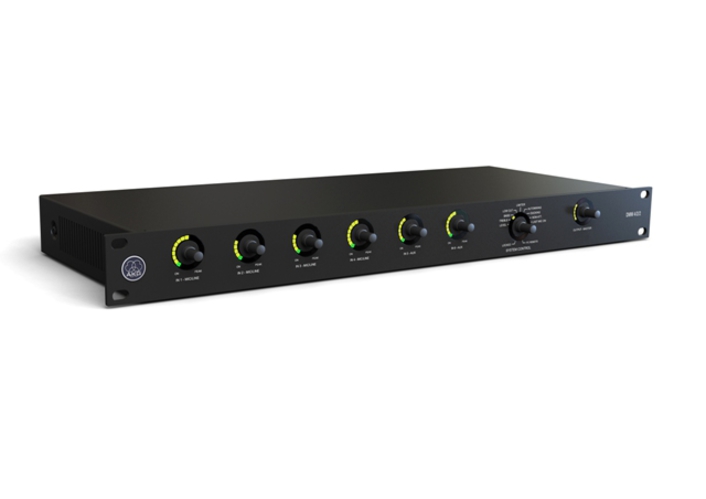 AKG DMM 4/2/2 Digital Automatic Mixer
SKOPJE, Macedonia – In an installation that underscores the versatility and sonic integrity of AKG’s DMM 4/2/2 digital automatic microphone mixer, DT Kodi recently deployed unit as the foundation of a complete Harman Professional audio upgrade at the US Embassy in Macedonia. The system – which also includes JBL loudspeakers, Crown amplifiers, dbx processors and additional AKG wireless products - will be used to provide sound reinforcement for the floor debates, as well as be used to satisfy conference sound requirements, entertainment requirements, and more.

The system was designed to meet a special request from the Embassy’s technical department, who were seeking a system that would be able to provide open conference, simultaneous interpretation, recording and some basic sound reinforcement. Furthermore, it needed to function virtually operator free.
“When I saw the space, it was clear that it was much more than a conference hall,” said DT Kodi’s sales manager, Iko Daskalov. “Therefore we needed to propose a solution that would cover all technical requirements for a range of activities, including conferencing, round table discussions, lectures, meetings and press conferences. Further to that, in the afternoons the same hall is used as a media room by other Embassy personnel, which means the system undergoes a heavy duty cycle.”
The three DMM 4/2/2 units are providing automated mixing of 12 AKG WMS 450 flexible wireless systems. Other WMS 4000 accessories included in the package were a central power supply, signal distribution and control of the wireless systems, with omnidirectional antennas placed in the conference hall. The DMM 4/2/2 feeds the system processor and digital IR system for simultaneous interpretation from DIS (Danish Interpretation Systems), while solid state recorders have also been supplied.
The DMM 4/2/2 has been designed with a mixing algorithm that gives it the flexibility to handle nearly any mixing application. The system comes complete with four microphone and two stereo AUX inputs per each DMM 4/2/2, intelligent mixing algorithms with a noise sensitive threshold to prevent accidental activation of input channels and a digital signal processor with a dbx compressor. Each channel on the mixer offers switchable gain, switchable phantom power, and an incremental level control with peak hold display, and each system comes with an expansion connector that enables multiple mixers to be linked together for larger audio setups.
Sound reinforcement is achieved via a combination of Harman Professional components that also includes dbx processors, Crown amplifiers and JBL speakers. To be able to fulfill all requirements for entertainment, a surround processor has been added with custom installation speakers and powered subwoofers from JBL.
DT Kodi had been quick off the mark to specify this brand new mixing environment — which was supplied via Harman Professional distributors, AVC in Skopje.
“The room had already been fitted with an LCD projector and large media display — so we integrated them in to the system and added HDMI distribution and signal conversion for further extension,” stated Daskalov. “The system required careful tuning but once it was commissioned, the customer was impressed both with the performance and appearance of the design.”