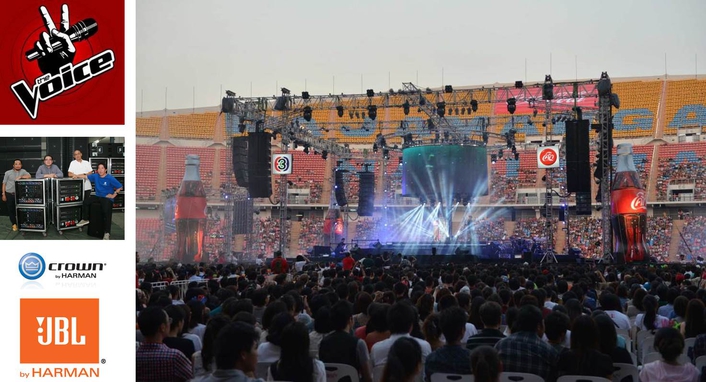 The “Real Voice, Real Talent” concert featured a large, square stage set up in the middle of the stadium, with loudspeakers and amplifiers on all four sides of the stage. The main PA system featured 36 JBL VTX V25 fullsize line array elements, flown in left-right arrays of nine elements each, at the front of house and opposite sides of the stage. These were supplemented with a total of 32 VTX S28 subwoofers, deployed on the ground in four cardioid-configured arrays of eight each.

The other two sides of the stage featured left-right arrays of six JBL VERTEC® VT4889 fullsize line array elements each, for a total of 24 VT4889 elements. A total of 24 VERTEC VT4880 subwoofers were on these two sides of the stage, deployed on the ground in four cardioid-configured arrays of six each. Powering the loudspeakers were 32 Crown VRack 12000HD amplification systems (for a total of 96 I-Tech 12000HD amplifiers). Utilizing the built-in signal distribution and on-board DSP resources of the VRack 12000HD’s, TYAA was able to drive the entire system with JBL V5 tunings, maximizing the performance and linearity of the VERTEC and VTX loudspeakers.

“We collaborated on the system design with Performance Manager, virtually building the system together within the framework of the software, and it was an incredibly smooth process,” said Eric Friedlander, Business Developer, Tour Sound, Crown Audio (who provided onsite support for the event). “TYAA worked with [Senior Manager, Tour Sound for JBL] Paul Bauman to optimize the PA virtually in JBL Line Array Calculator 2, so when setting up the system, we simply had to load the Performance Manager file into the amps and it made for a phenomenal starting point.”

This was the first event at which TYAA used its full VTX system, which it purchased through Mahajak Development Co., Ltd, HARMAN’s Thailand distributor.

“Unquestionably, it is a great honor for us to have this opportunity to employ world-class audio systems for the best performance for our customers,” said Chavalit Mahaviriyakul of TYAA. “We could not be more confident in HARMAN and Mahajak, as well as our decision to upgrade to the JBL VTX series.”

It's All About the Voice
CT Provides Vision to The Voice
Clay Paky Sharpys Sing on NBC’s “The Voice”
Clay Paky Sees Top Rating...The Voice’ in Australia
Furio Rocks
EMF the home of The Voice