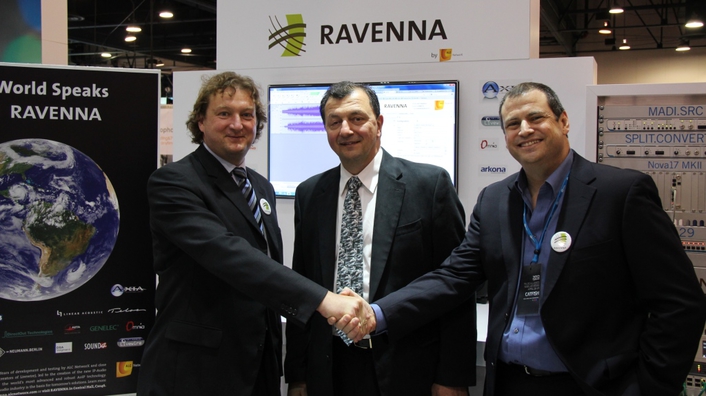 Philipp Lawo, Frank Foti and Michael Dosch at NAB 2012
In a press conference at NAB 2012 ALC NetworX and the Telos Alliance announced a new partnership to boost the RAVENNA IP-based media networking technology to new horizons. Combining Telos’ long-standing experience – more than 25,000 Axia Livewire™ devices in over 3000 installations – with the advantages of RAVENNA’s open technology approach based on latest industry standards, advances RAVENNA to the forefront of IP-based Professional Broadcast applications.

The Telos Alliance’s Axia Audio division, developers of Livewire, and ALC NetworX, the RAVENNA developers, have worked together closely to establish interoperability between Livewire and RAVENNA. Axia’s new xNode IP-Audio Interfaces support all fundamental operation principles of RAVENNA, and thus they are capable of interacting with RAVENNA-enabled devices. Specifically, IEEE 1588-2008 has been chosen as the primary synchronization standard for the new xNodes, allowing fully synchronized stream operation as defined within RAVENNA.

By implementing the newly defined RAVENNA Interoperability Profile, RAVENNA nodes can interchange streams with Livewire legacy nodes, based on their current capabilities. As a result, new RAVENNA-enabled products can be added to a large number of existing Livewire installations. These installations can continue to operate in Livewire legacy mode, but also connect with fully operational RAVENNA islands with selected stream interchange between legacy Livewire and RAVENNA nodes. This offers a smooth migration path from existing legacy Livewire installations to full-blown RAVENNA setups.

Michael “Catfish” Dosch, President of Axia Audio: “Ever since we launched Livewire in 2003 as the first IP audio protocol for broadcasting, we’ve been dreaming of the day when every piece of broadcast equipment is connected to the network. After all, a network that connects only to itself is not very useful! With 34 Livewire partners and 14 RAVENNA partners already onboard, broadcasters will benefit immediately from a dramatically expanded universe of nearly 70 networked pro audio products that can work together. And even more partners and products will become available over time.“After nearly a year of Axia and RAVENNA developers working together, the broadcast world is now one giant step closer to that networked vision becoming reality.” 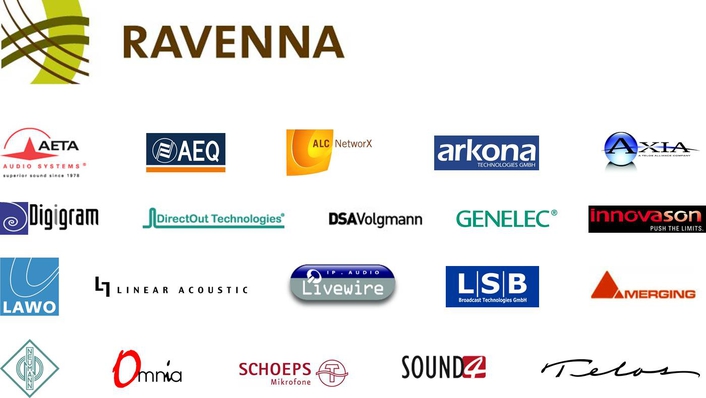 Philipp Lawo, CEO of ALC NetworX: “With its Livewire system being introduced in 2004, Axia has proven the capability of an IP-based solution to fulfill the demanding requirements of real-time media distribution within radio broadcasting facilities. With its introduction in 2010, RAVENNA could leverage the latest technology and IT standards achievements to significantly increase the capabilities and performance of an IP-based media distribution technology, providing for stretching its application to even more demanding use cases in the field of Professional Broadcasting. Combining Axia’s experience with the latest breed of technology from RAVENNA will result in a solution that will serve the highest demands of a wide range of today’s and tomorrow’s broadcasting applications.”

About Livewire
Livewire is the broadcast IP-Audio networking protocol developed by Axia Audio. Livewire utilizes Ethernet to provide an easy way to route and share audio and logic throughout the broadcast plant. More than 3,000 radio studios are equipped with Axia AoIP networks, and over 25,000 Livewire-equipped devices are in daily service worldwide.

About RAVENNA
RAVENNA is a technology for real-time distribution of audio and other media content in IP-based network environments. Utilizing standardized network protocols and technologies, RAVENNA can operate on existing network infrastructures. RAVENNA is designed to meet the strict requirements of the pro audio market featuring low latency, full signal transparency and high reliability.Unlike most other existing networking solutions, RAVENNA will be an open technology standard without a proprietary licensing policy.