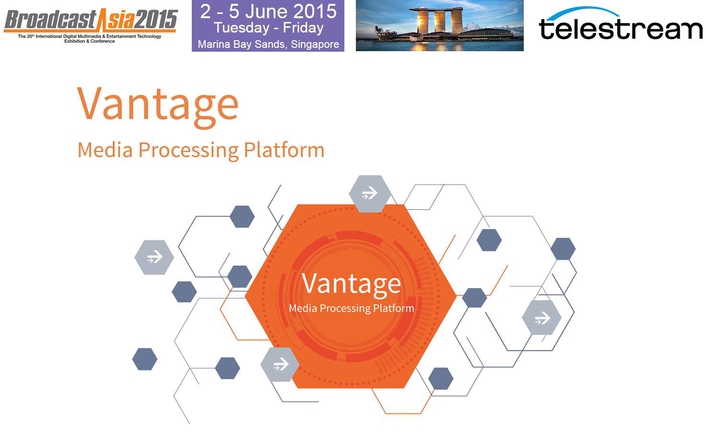 The Vantage platform is based on a flexible service-oriented architecture that is made up of discrete services and connectors that combine to create powerful automated workflows – all under unified system control.  Vantage services provide transcoding, media capture, metadata processing, media analysis, and content assembly.  Vantage connectors enable seamless, API-level integration with third-party systems.

Built on Vantage, Tempo is a new time adjustment solution for re-timing file-based content and intelligently adjusting the running time of shows and segments. It utilizes new time compression algorithms that deliver superior quality and faster turn-around times. Running on the Vantage media-processing platform and new Lightspeed K80 Server, Tempo is easy to use and offers all of the benefits of the industry's leading workflow management and transcoding system. 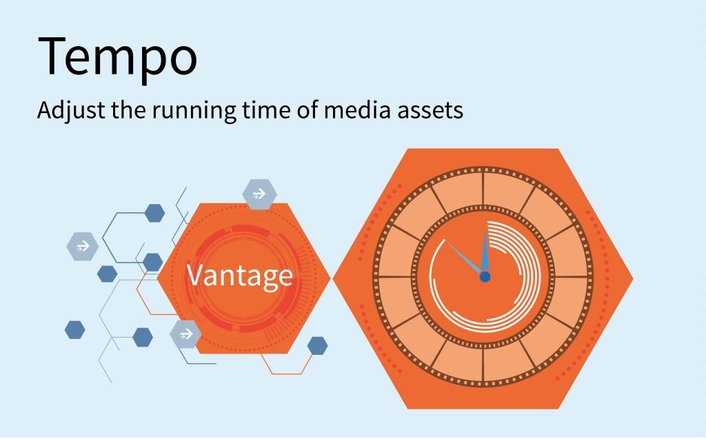 Tempo is a product that returns a substantial ROI by providing the ability to increase advertising avails throughout the day. Tempo will be particularly interesting for companies who are working with content from other regions of the world where the ad timing is different than their current format.

Hand-free operation with Vantage camera ingest
A new Vantage Camera Ingest option offers significant time savings for post-production and news users by enabling hands-free batch ingest, processing, time-alignment, and stitching of camera media. These new workflow automation capabilities remove the laborious and time-consuming processes of manually browsing and linking clips, importing and transcoding clips which all take away from editing time. For Avid Interplay environments, multi-resolution clips can be created automatically in Interplay while allowing frame-chase editing. This powerful camera ingest software automates and simplifies camera ingest, transcoding and importing of shots in an editing system, freeing editors to focus on editing, instead of manually finding, importing and stitching clips.

Vantage is known for its tight integration with Avid systems, simplifying and accelerating delivery of file-based media into and out of Avid environments. Sitting at the heart of Avid workflows, Vantage automates media and metadata ingest from incoming video feeds, assets and files to solve users’ most complex transcoding and file-delivery scenarios. Telestream extends this support with new cost savings for Avid users. Previously an expensive option, Send-to-Playback is now offered in all Vantage transcoders at no cost. Export from Vantage into stand-alone Media Composer, which previously required a higher-priced Vantage Pro Connect model plus an Avid option, is now offered as a standard feature on Vantage Transcode Pro.

Telestream also announced that Singapore-based broadcast IT specialist, Techtel (S.E. Asia) is creating a demonstration facility to showcase the capabilities of its new Tempo system and Lightspeed K80 Server to local broadcasters and facilities. At Broadcast Asia, Telestream and Techtel will be showcase Tempo and Lightspeed K80 on their joint booth (5J3-03).

Telestream also announced that Singapore-based broadcast IT specialist, Techtel (S.E. Asia) is creating a demonstration facility to showcase the capabilities of its new Tempo system and Lightspeed K80 Server to local broadcasters and facilities. At Broadcast Asia, Telestream and Techtel will be showcase Tempo and Lightspeed K80 on their joint booth (5J3-03).

“At Broadcast Asia, we will show visitors how Telestream can help them build new and significant revenue streams within their broadcast operations,” said George Boath, VP of International Sales, Enterprise Products at Telestream. “IP-based business solutions have been a focus for us over many years and now we can demonstrate how Telestream can make the difference in many different sizes and scales of broadcast and electronic media facility.”