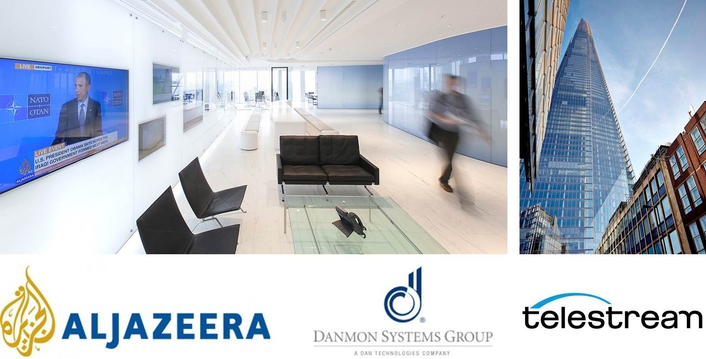 Broadcasting to over 220 million households in 100 countries, and with over 4000 staff from over 70 nationalities, Al Jazeera Media Networks is one of the leading global news providers. The London news production centre, designed around super-fast file-based workflows, will provide a blueprint for every Al Jazeera Media Network facility worldwide.

“The workflow at the London facility is completely new and re-writes the rule book in terms of design, operation, speed and efficiency,” commented Søren Bruun, Operations Manager at Danmon Systems Group. “Vantage’s ability to very rapidly ingest media into the Avid system enables Al Jazeera staff to start editing stories and get them to air in the shortest time possible. Vantage’s ability to present a growing media file to the Avid newsroom system is a key component in achieving this.”

Danmon Systems started installing the news production and output system in the last quarter of 2014 and the system went live in February this year. Al Jazeera Media Network reports that the workflow is operating beyond expectations and is providing major operating efficiencies. “In choosing our new platform for our worldwide upgrade to a modern file-based solution, Telestream was the obvious choice to provide our primary transcoding solution, using their proven Vantage solution on their innovative Lightspeed infrastructure,” said Feras Al Suliti, Director of Network Operations at Al Jazeera Media Network. “The tight integration between Vantage and our other vendors has proven invaluable, and now we have our solution working well in Europe, we look forward to bringing further innovations into our operation, and increased efficiencies as we continue to roll this platform out to our other sites.”

About Al Jazeera Media Networks
Al Jazeera strives to deliver content that captivates, informs, inspires and entertains. Launched in 1996, Al Jazeera was the first independent news channel in the Arab world dedicated to providing comprehensive news and live debate.
It challenged established narratives and gave a global audience an alternative voice—one that put the human being back at the centre of the news agenda—quickly making it one of the world’s most influential news networks.
Since then, it’s added new channels and services, with more than 70 bureaus around the world, while maintaining the independent and pioneering spirit that defined its character. Each subsidiary follows the same principles—values that inspire it to be challenging and bold, and provide a ‘voice for the voiceless’ in some of the most underreported places on the planet.
AL JAZEERA ARABIC
AL JAZEERA ENGLISH
AL JAZEERA DOCUMENTARY
AL JAZEERA MUBASHER
AL JAZEERA BALKANS
AL JAZEERA TURK
AL JAZEERA AMERICA
AL JAZEERA CENTRE FOR STUDIES
AL JAZEERA MEDIA TRAINING AND DEVELOPMENT CENTRE
AJ+

About Danmon Systems Group
Danmon Systems Group is one of the world's most experienced providers of systems integration support to television and radio broadcasters, postproduction houses and professional audio studios, as well as the corporate, academic and government sectors. Danmon's fields of activity include every aspect of broadcast and electronic media technology, from consultancy to production and postproduction, transmission and archiving, encompassing video, audio, graphics, streaming, audio visual and multimedia applications. Danmon Systems Group is part of Dan Technologies' Group, one of Europe's leading suppliers of audio, video, transmission products and digital media solutions. The Dan Technologies Systems Integration Division covers a wide spectrum of operations ranging from designing, installing and commissioning studios, playout centres, news-rooms and satellite systems to providing the complete infrastructure of television and radio stations for major broadcasters and service providers worldwide. The Systems Integration Division operates internationally from offices in Scandinavia, Europe, the Middle East and Asia.