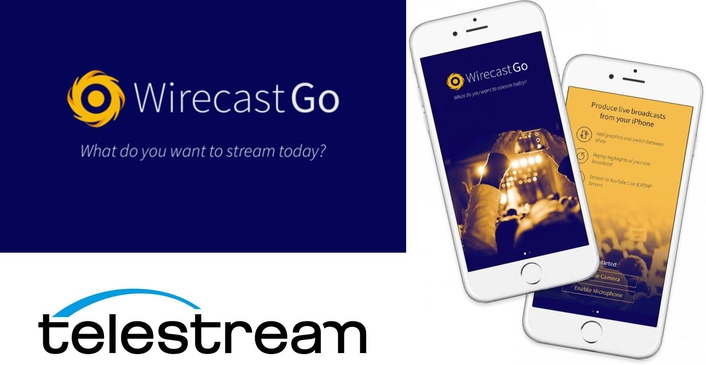 Telestream®, the leading provider of digital media tools and workflow solutions, today announced the introduction of Wirecast Go, a stand-alone iPhone live streaming application that adds to ENG (Electronic News Gathering) teams’ ability to be first to break the news. The App enables users to capture content using their iPhone camera, insert graphics, logos, titles and other images and then stream live directly to YouTube or any other RTMP (Real Time Messaging Protocol) server supported by a wide variety of content delivery networks (CDNs).

Telestream has developed Wirecast Go to support the rapidly growing community of both professional and amateur iPhone users that want to disseminate breaking news and live events. The company is targeting a number of audiences with Wirecast Go, including TV news journalists and ENG teams. In addition to shooting high quality video footage and sending it back to base, the journalist can also create professional quality live video streams on his/her iPhone and stream them to multiple destinations live from the news scene.

Building on Telestream’s experience in live streaming with Wirecast, the live streaming production software used by hundreds of thousands of webcasters, Wirecast Go differentiates from other mobile streaming apps through its advanced production capabilities. The application empowers any mobile user with professional features and functionality: it offers robust live video streaming to multiple destinations along with the intuitive ability to brand streams, add a range of graphics and edit shots.

“Today, smartphones are proving to be a valuable asset for field-based broadcast news teams and many other users, empowering them to capture news and events in ways that were previously unimaginable,” said Barbara DeHart, VP of Desktop Business at Telestream. “Wirecast Go enables video journalists to create professional live productions on their iPhones and then broadcast them on the broadest range of social or private networks.”

Wirecast Go will be available with two levels of features and functionality. The standard version, which targets the enthusiastic amateur user is free to download from the App Store and enables unlimited live streaming to YouTube from an iPhone. It allows insertion of images, logos and graphics from the user’s photo library, social chat and sharing, and the ability to save two shots in a shot list. Users looking for added functionality can unlock the premium features of Wirecast Go for $5.99, which enables live streaming to any RTMP destination, and switching between unlimited numbers of shots. An additional premium feature included in the unlocked version is the ability to capture and replay highlights from the live production with just a few clicks on the iPhone – a feature which Telestream has developed with sports and other live events in mind.

Wirecast Go will be demonstrated at IBC2015 in Telestream Stand 7.G30 and is currently available in beta.