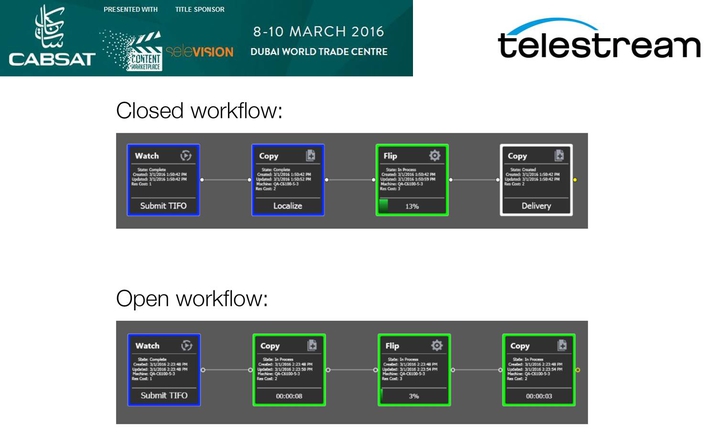 Telestream has developed Vantage Open Workflows in response to increased demand amongst news and sports broadcasters for OTT services to support multi-screen media distribution. The goal is to provide the news at the same lightening fast speed across a range of devices outside of traditional TV. Within a file-based workflow this presents a challenge since the core data file must be transcoded into several formats in order to be distributed across this broad and ever increasing range of mobile devices.

Vantage Open Workflows enable the user to start generating output before file input is completed. While the idea of performing actions on a growing file isn’t new, Vantage Open Workflows takes this capability to a new level by enabling multiple Vantage Actions such as Watch/Copy/Flip/Compute to simultaneously be working on a file as it is being ingested.

This capability reduces processing time and empowers broadcasters to automatically access content as soon as it starts to enter the file-based workflow and before file ingest is completed. Consequently, the ability to deliver TV broadcasts and multiscreen content simultaneously becomes an achievable, cost-effective task.

“Open Workflows, when used with intelligent workflow automation, save money by converting data faster and enabling better utilization of hardware systems within a broadcast facility,” commented Paul Turner, Vice President, Enterprise Product Management at Telestream. “Early trials of Open Workflows running on our Vantage workflow automation platform indicate that efficiencies of up to forty percent are commonplace in workflow applications such as news and sports production environments.”

For applications where speed is not the primary driver, Open Workflows still bring significant benefits. The ability to orchestrate all of these file manipulation and conversion actions sequentially whilst the initial data ingest is still happening increases efficiency in operations throughout the facility.

An important feature of Vantage Open Workflows is its ability to integrate seamlessly alongside third party systems, supporting existing file-based workflow operations. For example, many news broadcasters utilize Vantage as the primary ingest channel into their Avid newsroom system.

“Vantage Open Workflows present newscasters with immediate and significant advantages,” added Paul Turner. “Whilst Open Workflow access to data output before file input is complete is not unique to Telestream, the robustness in the automation of workflows (and thereby the decreased opportunities for file errors) that Telestream provides with no added time delay is an important consideration.”