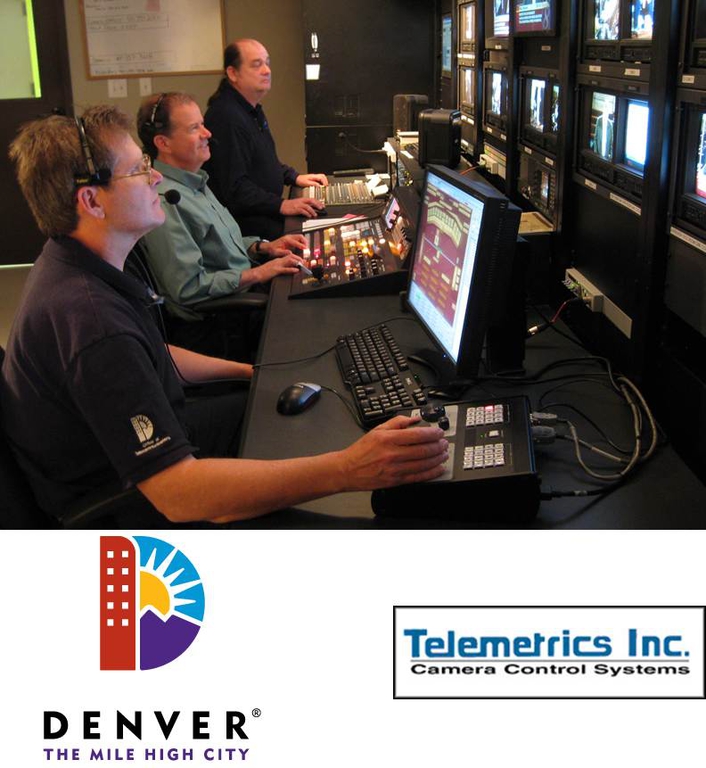 “The Telemetrics camera robotics control solution brings a great deal of efficiency to our productions, vastly streamlining set-up while eliminating break-down. Our installations also enable us to move seamlessly between multiple meetings even while covering sessions live.  Fewer crew per production also gives us savings that allows us to redeploy our limited staff to other important projects,” said Alan DeLollis, Station Manager, Denver 8 TV. “I actually think our officials like the fact that the meeting rooms are now free of camera operators that could be distracting. The robotic camera placements have certainly uncluttered tight meeting spaces and removed the operator obstacle for other participants and observers allowing a more natural interaction.”

The Telemetrics PTZ heads are located in three different meeting rooms in the Denver Civic Center; five in council chambers, three in the council committee room and three in another meeting room. All PTZ heads are controlled from two matching control rooms located in the basement of the Civic Center’s historic City Hall. The remote camera positioning and legislative software system is used for live coverage of the Denver City Council meetings, Council committee meetings, Mayor/Council meetings, Clerk Recorder meetings, Independent Auditor’s meetings as well as other special meetings, press conferences and presentations as needed.

“The system gives us a broad range of choices for creating our presets and moving shots. We have found that our coverage can be just as dynamic as previously accomplished with room operators as the functionality of the robotic controls is quite robust,” adds Mr. DeLollis. “And, it’s a very easy system to learn. We’ve trained several different crew members to operate the system so we have flexibility in scheduling.”

The Telemetrics CPS-LG-S Legislative Control System features customized touch screens of the council chambers and meeting rooms for easy and accurate camera position for best shot selection. The software can be used to automate multiple cameras per room with audio, graphics and up to 6000 presets. When a seat is activated (via the mouse, microphone or touch-screen), the CPS-LGS-S recalls the preset shot associated with the seat as well as any graphics (i.e. names) or video. A joystick control panel provides trim controls for pan, tilt, zoom and focus, to adjust the camera's position if the user moves.

The CP-D-3A Control Panel features a high quality three-axis joystick for pan, tilt and zoom functions to adjust the camera’s position if the user moves and speed select knobs to adjust sensitivity. Its modular design can be easily expanded and upgraded to accommodate additional cameras and control capabilities.