Techs on the Decks is a Huge Success

The event – which has currently fundraised £4000 for technical entertainment charity Backup – was the brainchild of Gordon Torrington from Hampshire-based rental company Liteup. The idea was spawned from a conversation he had with Liteup’s MD Marc Callaghan and freelance LD Warren Hutchison about the great work of the charity in supporting many industry peers including a friend and colleague of all at Liteup, lighting director and programmer Jonathan Rouse who passed away recently in May … and is much missed. Techs on the Decks was viewed by 37,000 people creating a massive buzz around the industry and giving those directly involved a chance to do what they are so passionate about … as the industry remains closed since mid-march, still without a real practical roadmap on the table for when things might re-open.

Gordon’s first job aged 15 was DJ’ing at the Roller King in Ipswich through which he started working as local crew in the theatre and then on to lighting where he’s enjoyed a busy and challenging career where no two days are ever the same. His DJ’ing activities continued for several years, but over the last decade, work has been too full-on to do both.

During the lockdown, he took some CDJs home and finally had time to rediscover the joy, excitement, and magic of mixology! 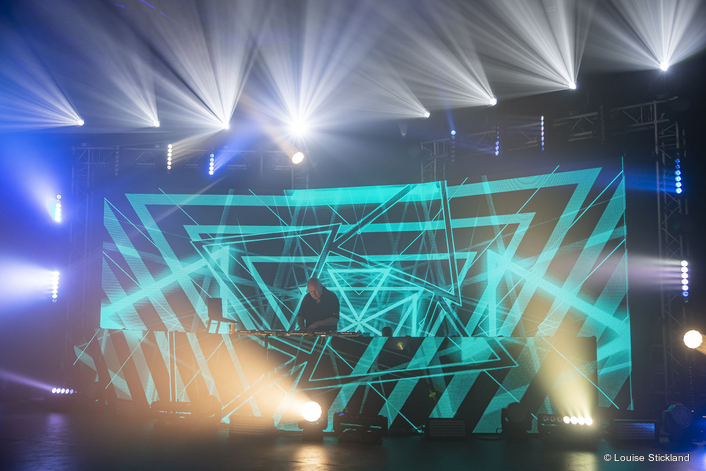 Gordon started sourcing the talent with a few Facebook posts and calls to people he know would be interested and carefully curated a running order starting 6 p.m. Friday to harmonize with times, moods and keeping the energy pumping. Talking about this process Gordon said, “as a DJ, you would normally read the crowd for which direction to go in, however without an audience … you really have to plan the music format”.

Techs on The Decks was a Covid-conscious, socially distanced event staged from Liteup’s two streaming studios which have been built at their warehouse in Hampshire since the crisis began. All the lighting, LED screen and robo-cam kit was supplied by Liteup including Robe moving lights which were installed in both studios, pulled from their extensive rental stock, among other fixtures. 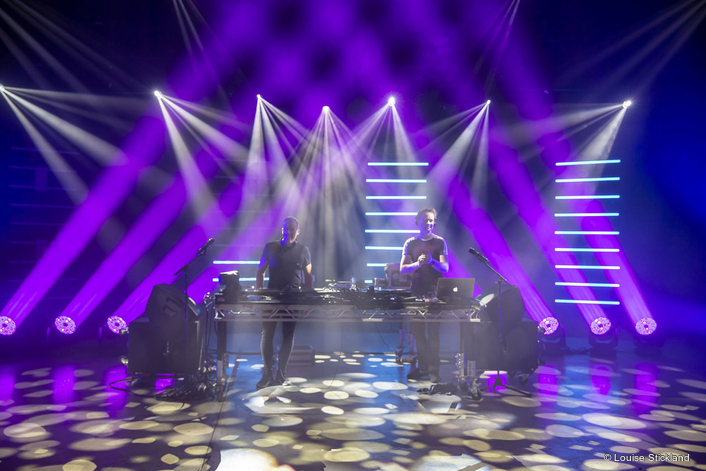 The cameras / PPU package for Studio 1 was from Solotech. Stage Truck parked up one of their brand-new sleeper trailers in the car park allowing the crew working over the full duration a chance to grab a few hours’ sleep. Several classic VW camper vans also rocked up in the car park as some crew and artists brought their own funky 5-star overnight accommodation! 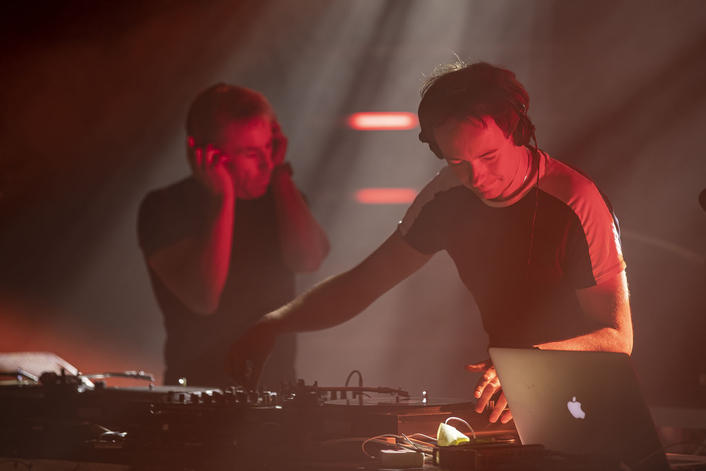 There was also one live band set on Saturday afternoon from Zone Fluffy in Studio 1 – a band that Gordon first lit back in 2002!

As well as stage managing on the day Gordon programmed himself to play the opening set – blasting out a stonking collage of bangerz, getting right back to his roots!

Techs on the Decks delivered 24 infectiously rhythmic incendiary sets that also showcased the extraordinary musical talent that lurks just offstage across the industry! 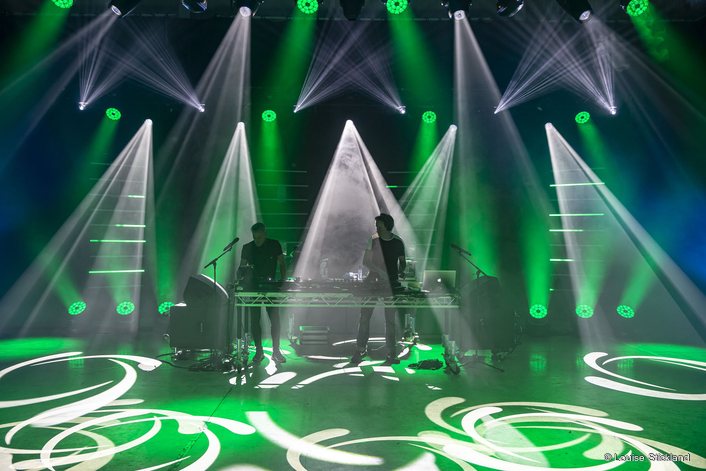 Everything was organised in around 6 weeks. Gordon explained that as he and Marc did those initial social posts, the idea was a still a ‘muse’, then they received incredible feedback from “so many dedicated, skilled and creative people in this industry who absolutely love what they do and have found themselves a bit lost. The event became a way of bringing at least some of us together to share some great vibes and fundraise for a good cause”.

The technical infrastructure – based on offering excellent affordable production values – for both studios was designed by Warren Hutchison, for this event and for general use. The pop-up venture is starting to get regular traction with local artists plus others from further afield, all keen to do professionally produced live streams.

Both studios were utilised for Techs on the Decks which enabled a ‘flip-flop’ operation for changeovers. 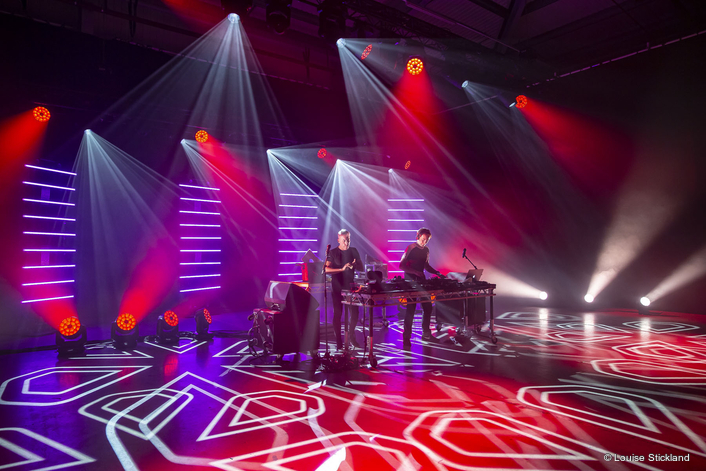 Studio 1 is the larger space which can accommodate socially distanced bands. Here the lighting setup is modelled on a festival main stage, just scaled slightly smaller to fit the available physical area!

Fixtures for Techs on the Decks included 11 x Robe ESPRITES – seven in the front truss, four on the mid for both back and front key lights plus effects, chosen for their “power, optics versatility and great on-camera look,” explained Warren.

Twenty-four Robe Spiiders were rigged four each on the front, mid and back trusses, with 12 on the floor upstage and along the sides, while seven LEDBeam 150s and 10 x Pointes across the back and mid trusses completed the moving light count. 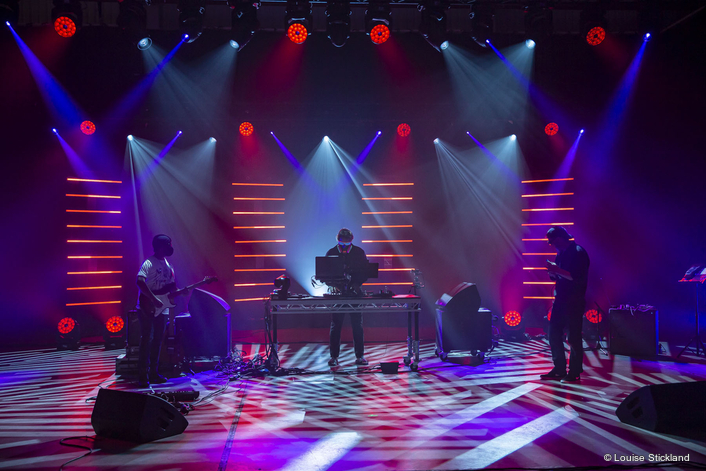 Added to that were four upstage truss towers each fitted with Ten pixel-controllable LED battens – programmed and running via the lighting console – and some Flare strobes with the choice of a ChamSys MagicQ or an Avo Arena console.

At the core of the video system in Studio 1 was a Grass Valley Korona mixer / switcher which received inputs from three GV LDX 86 4K cameras fitted with a variety of Fujinon lenses and from two of Liteup’s 4K Panasonic robo-cams. This was all coordinated by Paul ‘Macca’ McCauley for Solotech UK. 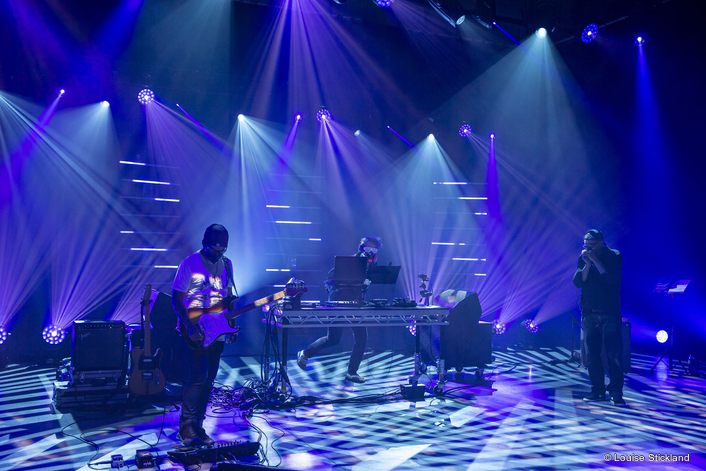 Paul’s industry roots started as a music-loving teenager with running audio for raves at the famous Tottenham Roller Express (where he was also a roller-marshal), and he comments, “We work closely with Liteup and this was a brilliant idea to get people together and very important to support Backup. I know several friends and colleagues who have benefitted directly from the charity”.

Studio 2 featured eight Robe MegaPointes on a goal-post truss above the DJ booth, a bunch of Magic Blades, some LED washes, and more Flare strobes, all controlled from a grandMA2 light. A back wall of Liteup’s 5.9 mm INFiLED screen was great for displaying eye-popping visuals and the complete length of the front of the DJ booth was clad with the same surface, bringing depth and dimension that maximised the space. 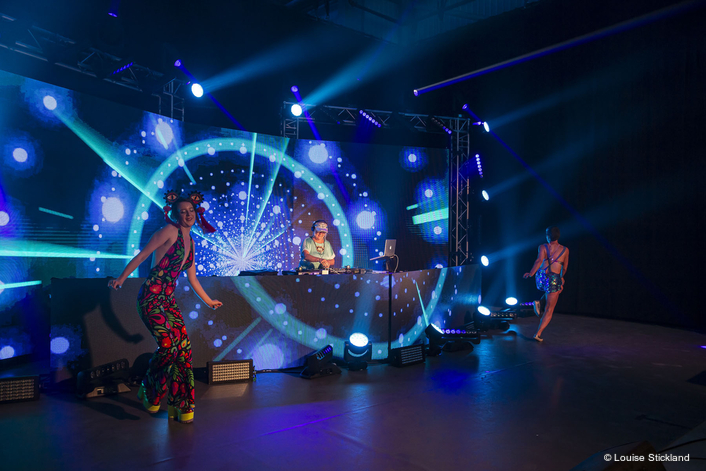 The camera system was one GV LDX 86 and four Panasonic robo-cams. Playback graphics and visuals were running on one of Liteup’s Resolume media servers, operated live by a rota of VJs together with the robo-cams, ensuring stunning, different, and individual looks for every artist.

Having these Robe fixtures in the studios ensured that every act would have its own individual lighting style.

The event embraced multiple genres of music, each artist bringing their own energy, edge and superlative mixing and production values in a groove-swirling megamix that would do any major high-profile festival stage proud.

Following Gordon’s opener were the Back2Back Vinyl DJs, Simon Horn and Mark Hobbs with their classic house groove, then things got noisier, harder and faster with a selection of DnB, jungle and trance sets taking viewers through to the early hours when Dave Roberts took the dex for a chilled hour between 6 – 7 a.m. The adrenaline got flowing again with tropical house disco and garage, a maelstrom of class DnB from Michael Bourner & Sam Whitby dovetailing into the fabulous house sounds of Julie Devine who wrapped the stream at 6 p.m. on Saturday … 24 hours after it started!

A weary but ecstatic Gordon commented, “I am absolutely delighted with everything – from the music, the camaraderie here in the studios, the viewing figures and of course, the money raised … it has been an incredible and highly rewarding experience!”

Marc added, “It’s been a tough few months for everyone in our industry and no doubt there is more of that to come, but it’s amazing to see people volunteering and uniting in the same place and headspace to do so enthusiastically what they love and do best. It’s that spirit, collaboration and energy that makes this industry so great!”

The general after-show vibe is that this will not be the one and only Techs on the Decks event … so watch this space.

Techs on the Decks
Robe