Technology that is Fun to Work with 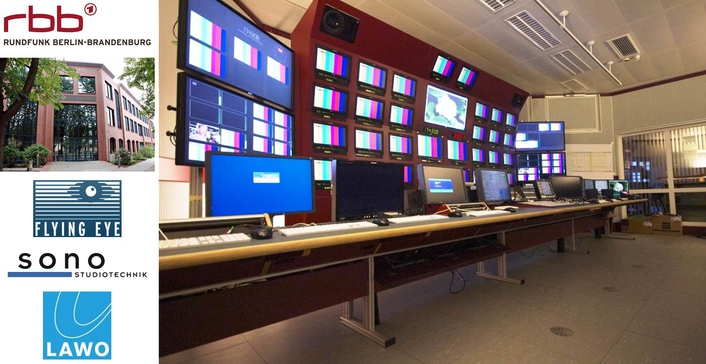 RBB Potsdam features Lawo mc²56 consoles in main and ancillary control rooms
With new editing systems, a new newsroom computer system and a video wall of plasma monitors, the TV control room at German public broadcaster “Rundfunk Berlin-Brandenburg” (RBB) has undergone some major changes. The old CRT displays that once dominated the room are being retired and up-to-date technology has arrived to take its place – the move will completely update the production facilities in Potsdam to HD in 2014.

Part of these changes was the audio technology. After finishing a Europe-wide open competitive bidding round, the RBB chose “sono Studiotechnik” as its general contractor – a company that specializes in system design and integration, and counts products from Lawo in its portfolio.

The new Potsdam setup is centered on two Lawo mc²56 mixing consoles, which were chosen for their operational flexibility and to deliver high-quality audio. “There are already Lawo systems in house, with which the RBB had very positive experiences. And the two systems having identical system cores is also a benefit, of course,” explains project manager Stoffer Geiling from FlyingEye GmbH.

The main control room has been equipped with mc²56 console with 32 faders (16-16C), and will support production that is carried out completely manually and production that is partly automated. The automation system that has been installed can control all relevant equipment, including the Lawo consoles, the audio and video routers, the video mixer, the studio lighting systems, the playout server, the font generator and more.

The ancillary control room, meanwhile, has been equipped with a Lawo mc²56 with 16 faders (16C). From this room, which has been designed for operation with only a skeleton staff, smaller news elements are broadcast and pre-recordings are made. The cores of the main and the ancillary control room consoles are essentially identical; the only difference is the number of faders on each control surface. Each console can be used in place of its counterpart in case of failure.

The complete system is networked with the help of an automation system from Aveco, with the two 8k routers providing six MADINetlinks each. “The programming of the control room automation is so much easier when it has to be done with only one type of console. And also the operating staff are pleased when identical systems are used in both control rooms,” continues Geiling.

Course of the project
The particular challenge presented by this project was that very many changes were made at the same time – especially regarding workflows. As these are to be placed under the control of an automation system extensive planning was necessary, and the staff had to be trained to prevent them from being strained or frustrated by the changes. “A control room is no enclosed entity – it is very important how things get into it, and how things get out. And when there are so many changes happening simultaneously, it is very important to coordinate and harmonize the steps with each other,” explains Geiling. 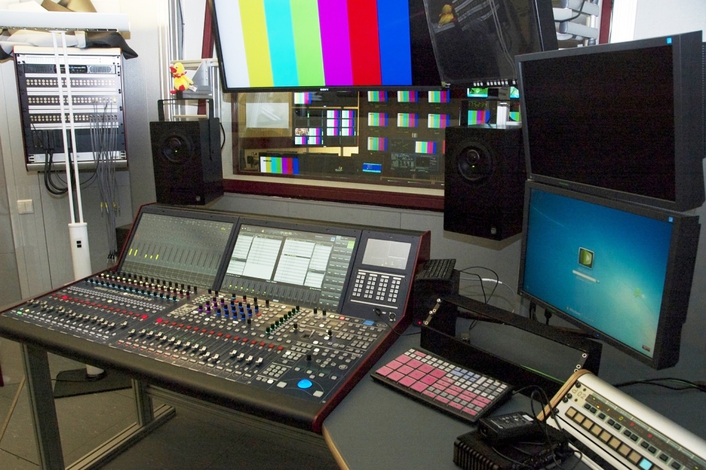 The goal was to ensure that all employees were satisfied with the new workflows before the changeover: “The investment we made in the extensive testing period was absolutely worth it. The more relaxed you can be when going on-air, and the more experienced the staff are with the new workflows, the better. In this case, three months turned out to be perfect,” Geiling continues.

The trial operation period was divided into three stages. Called the Blue, Yellow and Red Phase, each of these was a month long. When starting the trial operation, all technical equipment was installed and fully functional, and all interfaces were running. In the Blue Phase, technical adaptations were made and the control room automation was optimized, allowing the directors to make themselves comfortable with the new studio setup. New workflows for the interplay of the newsroom computer system Open Media and the surrounding equipment had to be devised and optimized. In the Yellow Phase, elements of forthcoming shows were tested: different scenes, transitions and the integration of the monitors in the studio.

In the Red Phase, the goal was for the new system to operate in parallel with the old on a show called “zibb – Zuhause in Berlin und Brandenburg” (“At home in Berlin and Brandenburg”). “In this show we jump between pre-recorded elements and live-action in the studio all the time. The video inserts are automated and everything that is happening in the studio is done completely live by the staff in the control room,” explains Geiling. In the last week of the Red Phase testing, the broadcast of “zibb” was run completely in parallel. “The show that actually went on-air came from the old studio, and the trial production came from the new, but rather than put it on-air, we sent it into a terminating resistor,” he explains.

With its good communication channels and extensive trial phase, the project may also set a precedent for updating RBB’s other facilities. “If we had not joined forces, talked to each other straightforwardly and had an ear for each other, than we would have never been able to successfully complete a project like this. With so many changes happening at the same time, so many crafts being involved, it was really a team effort. And we are especially proud of the control room – it doesn’t really look like a technical room but creates a very comfortable working atmosphere instead,” concludes Geiling.

FLYING EYE
FLYING EYE is an internationally active consulting company, which specialises in the media and IT industries. Concepts for internal organization and systems solutions are developed and implemented in collaboration with customers.

Sono Studiotechnik
For more than 25 years, sono Studiotechnik has provided customer-orientated advice and services. Is range of services comprises system design and integration, broadcast rental and sales for all areas of video, broadcast IT, audio, intercom and system technology.