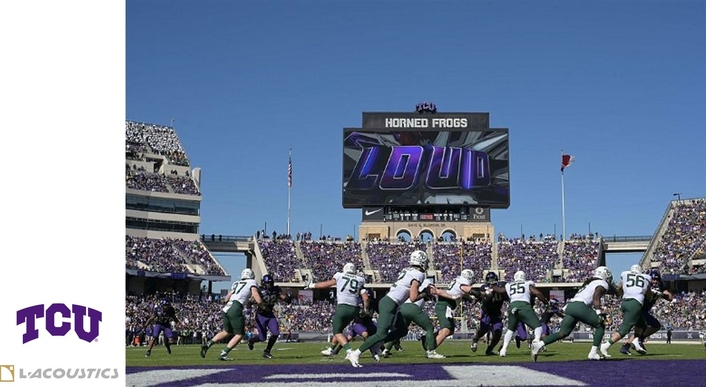 For fans of Texas Christian University’s (TCU) Horned Frogs football team, this school year’s Big 12 conference football season was bigger and bolder than ever thanks to the kickoff of a $118M expansion of the Fort Worth campus’ Amon G. Carter Stadium. Among its many improvements, the first phase of this multi-year initiative notably involved a significant upgrade of the nearly 50,000-capacity stadium’s video and audio facilities, including a new L-Acoustics K1/Kara loudspeaker system designed and installed by local integrator Electro Acoustics (EA).

According to EA Account Manager Ryan Walker, who has been with the firm for 20 years, the project actually marked the second L-Acoustics system to be installed on TCU’s campus. In 2015, the company installed a highly effective Kara loudspeaker system paired with SB18i subs at the school’s Garvey-Rosenthal Soccer Stadium, home to the popular Lady Frogs women’s soccer team.

“After discussions with Ryan and Chris [Jordan, EA president], as well as our own experience with L-Acoustics at our soccer venue, we knew it would be the right choice for our football stadium,” says TCU Senior Associate Athletic Director T. Ross Bailey, who also overseas Facilities & Operations. 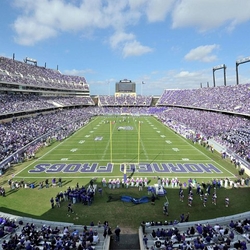 When the university revealed that it would be installing a much larger 5,500-square-foot video display at the top of the north end-zone seating section at “The Carter,” the Electro Acoustics team reached out to L-Acoustics Sports Facilities Application Manager Gino Pellicano for product guidance and Soundvision design assistance.

“Working to maximum height requirements, the new video board—a massive 100+ feet wide and nearly 50 feet tall—took most of the space, leaving less than 12 vertical feet to hang our loudspeaker arrays in the area above the display,” Walker recalls. “With such tight space constraints, we needed a fairly compact loudspeaker system that could still throw 500 feet and push 95 to 98dB at that distance when needed. Gino suggested that we use the K1, which to my knowledge is the only solution on the market that could check off each of those required boxes for us.”

EA Systems Designer Steve Burge worked with Pellicano on the design of the football stadium’s new system, which currently features three centrally positioned K1 arrays each comprised of six enclosures firing down the field to cover the far southern half of the bowl. To address the fans on the closer northern half, a total of 16 smaller Kara enclosures were also flown directly above the video board. These were divided into arrays of seven, five, and four enclosures, tailored to the unique heights of the nearby seating stands. Dual hangs of five SB28 subs are flown behind the center K1 array for LF impact, and all of the arrays are visually concealed behind a scrim emblazoned with the home team’s moniker. 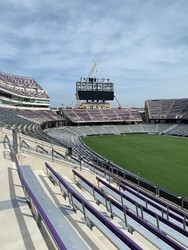 On the underside of the display, six short-throw X12 enclosures provide downfill coverage to the areas in the shadow of the video board. Furthermore, twelve LA12X and seven LA4X amplified controllers power the entire loudspeaker complement, which is also networked via a new Milan-compliant P1 AVB processor.

With the new sound system commissioned and ready for the Horned Frogs’ season opener in late August of 2019, Walker notes that the sonic improvement was immediately apparent, even to untrained ears. “Everyone notices the clarity of the L-Acoustics system, which is so much better than what was in there previously,” he says. “The funny thing is that everyone thinks that this system is louder than the old one. It’s certainly capable of being much louder, but they’re now averaging between 88 and 90dB for games, which is actually quieter than they ran their old rig. Plus, the comment that I’ve heard over and over is, ‘I can finally understand what the announcers and refs are saying!’”

TCU’s Bailey echoes Walker’s sentiments. “I would say that the sound is clearer without having to be louder, and that’s a big improvement for our fan base,” he notes.

Although Pellicano confirmed that the Soundvision model predictions very accurately matched the performance of the real-world system, Walker also verified those results with his own ears. “I was very surprised and impressed with how even and consistent the sound is throughout the entire stadium,” Walker shares. “The transition between the Kara and K1 coverage areas is so smooth that it’s almost imperceptible, even when you’re listening for the changeover. We had a very similar positive experience when we installed a K2 system at the new Dickies Arena here in town last year, and now two of Fort Worth’s premier venues have premium L-Acoustics solutions for an enhanced audience experience.”

About L-Acoustics
Founded in 1984 near Paris, France, L-Acoustics is the market leader in professional sound reinforcement technologies. With over 550 team members worldwide and offices in Paris, London, Los Angeles, and New York, L-Acoustics is present in over 80 countries via our network of Certified Providers. Focused on solutions that elevate the audience experience, more than 20% of L-Acoustics’ talent is devoted to R&D in the areas of acoustics, applications, mechanics, electronics, signal processing, and software development. In recognition of creating innovative professional sound technology, L-Acoustics was named as one of Fast Company’s Most Innovative Companies of 2020.