.
Vocal effects expert TC-Helicon and audio specialist Sennheiser will launch two attractive bundles at NAMM 2013 that give singers and singer/guitarists the power to unlock new creative possibilities from their vocal performances.

The packages include Sennheiser’s new e 835 fx, a special version of their popular evolution e 835 microphone with an effects control button, and an option of either the VoiceLive Play vocal effects unit for singers or the VoiceLive Play GTX for singer/guitarists from TC-Helicon. “These bundles will not only provide singers with a great sounding microphone, but also give them full control of their vocals with amazing audio effects,” says Michael Polten, Director Customer Relationship Management at Sennheiser.

Kevin Alexander, CEO of TC-Helicon, adds: “These packages are an ideal choice for performing vocalists who want to perfect their live performances. The bundles also give a great start to aspiring singers who can rely on a best-selling professional stage microphone combined with an effects unit from a manufacturer that hundreds of thousands of performing musicians worldwide put their trust in.”

A special version of Sennheiser’s most popular vocal microphone, the evolution e 835 fx, is the heart of both new bundles. The microphone features an effects control button that allows the singer to perform multiple actions, like switching presets or toggling HIT, LOOP, and TALK functions – inconspicuously and conveniently, without having to reach for the effects unit. “The microphone is the instrument of the singer. It’s a very personal tool that needs to be relied on as extension of their physical performance,” explains Michael Polten. “The extremely popular evolution microphone delivers the quality build and sound quality that rewards that trust.”

The microphone
The mic’s shock-mount capsule has a cardioid pick-up pattern with good ambient noise and feedback rejection to enable greater signal levels to be delivered before feedback. The typical proximity effect of a cardioid is optimised for close vocal work, while the rugged mic construction with a die-cast zinc casing provides an optimum handling and weight profile.

The vocal effects units
TC-Helicon makes the bundle available with either of its popular vocal processors, VoiceLive Play or VoiceLive Play GTX. “With these processors, you do not have to worry about your sound at varying live performance locations,” says Kevin Alexander. “The VoiceLive Play units will heighten your performance with effects such as backing harmonies, reverb and vocal double tracking, independent of the venue’s console.” At home, the effects units can be used to work on songs and explore new styles, or to practise using their built-in pitch display and singing stats.

VoiceLive Play has ‘ears’: via its built-in RoomSense microphones, it will detect the key of outside musical sources to create perfect vocal harmonies – or to provide a live stage mix for vocalists using wireless monitors. It features adaptive EQ, compression, de-essing, and pitch correction. Effects also include the TC-Helicon VLOOPTM performance looper, and there are over 200 genre presets to select from, with hundreds more to download for free, allowing singers to easily find the style and sound they are looking for. 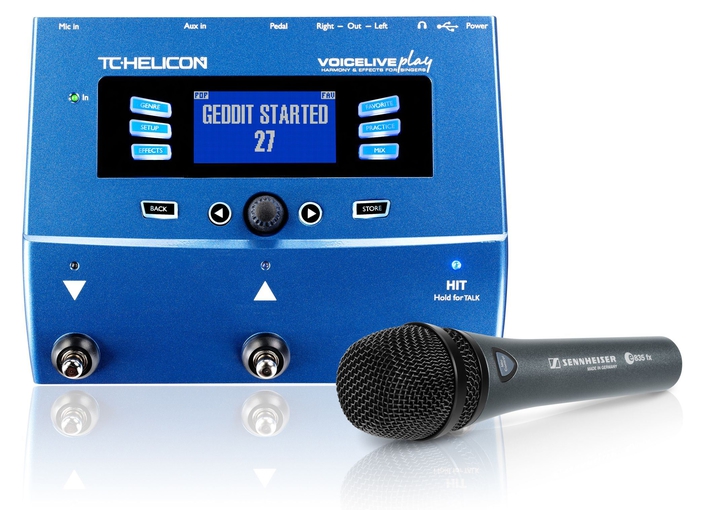 For practising, vocalists can connect their MP3 player and record themselves – the unit is even able to cancel existing vocals in music. Further in/outputs include stereo XLR outputs, a headphone socket and USB connector for audio streaming and recording.

VoiceLive Play GTX for singer/guitarists adds award-winning guitar effects to the ample vocal effects that VoiceLive Play offers. “This is the first ever combination of complete vocal and guitar processing – a genuine dream machine for both pro and practising guitarists,” Kevin Alexander comments. A wide choice of artist and song-inspired presets offers signature vocal and guitar sounds, with a full editing ability allowing users to define their own unique style.

VoiceLive Play GTX for singer/guitarists adds award-winning guitar effects to the ample vocal effects that VoiceLive Play offers. “This is the first ever combination of complete vocal and guitar processing – a genuine dream machine for both pro and practising guitarists,” Kevin Alexander comments. A wide choice of artist and song-inspired presets offers signature vocal and guitar sounds, with a full editing ability allowing users to define their own unique style.

About TC-Helicon
TC-Helicon was founded in 2000 and is the only pro audio company 100% dedicated to the needs of singers. Its customers include the most demanding of live performers, up and coming artists, and amateur musicians. The range of products spans from floor-based vocal processors, delivering completely produced vocal sounds on the stage, to stand-mountable, hands-on units and professional rack-mountable solutions. TC-Helicon is the absolute market leader in vocal effects, more than doubling its sales in the last three years, with flagship units such as VoiceLive Touch, VoiceLive 2 and VoiceLive Play paving the way.