One of the leading manufacturers of loudness metering and processing units, TC Electronic, has successfully gathered all of its technology and expertise in a high-density and pristine solution. Quite simply, DB6 is a TV and Mobile TV transmission processor that is able to handle everything regarding loudness in one simple process – loudness metering at the input stage, up or down conversion, loudness processing, on-line lip-sync delay, loudness metering at the output stage and logging of all relevant loudness statistics. In short, it is a transparent one-step loudness management solution, regardless of codec and delivery platform.

DB6 is a new addition to the highly acclaimed DB family of processors that includes DB2, DB4 and DB8 which have been in use 24/7 at several of the world's leading broadcast stations for more than a decade.

High Density, Low ‘Per-Stream’ Cost
Density is key at many broadcast stations and of course in OB Vans. Therefore, the new DB6 platform is housed in a single rack space unit that allows processing of up to 3 simultaneous SD/HD/3G streams, making it one of the most compact and powerful solutions on the market. Surely, density does not necessarily equal cost-effectiveness, but in this particular case, the cost per stream is highly competitive. DB6 features two 5.1 capable processing engines per SDI stream, each able of delivering to any platform and any codec; be it HDTV, Mobile TV, Digital Radio or Podcast using AAC, Dolby, Ogg Vorbis, Lossless or Linear. 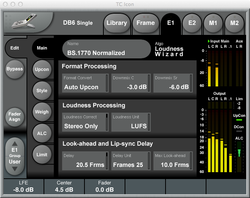 LoudnessWizard: One Algorithm to Rule Them All
DB6 is like having a Plug & Play solution to Loudness. The LoudnessWizard™ algorithm takes care of loudness correction, up-conversion from stereo to surround formats and down-conversion from surround to stereo. There is no need to know every detail of the inner workings of loudness standards – apply the LoudnessWizard algorithm and let it combine and chain together multiple processes on the fly and without any latency penalty. Once configured, it can literally be left alone to work its wonders effectively as well as transparently; though the user also may let it know if a program has already been normalized or processed.

Introducing more industry-first solutions, the LoudnessWizard algorithm is able to automatically detect the nature of any incoming signal and act accordingly as defined by the engineer. It also integrates multichannel TC Delay, which may be adjusted live without artifacts and used for lip-sync, profanity prevention and loudness processing look-ahead. 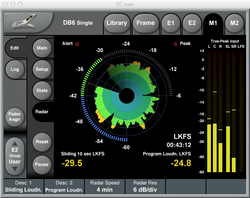 LM6 Radar Loudness Meter
Loudness metering at the input and output stages is handled by TC Electronic’s innovative and highly regarded Radar Loudness Meter. It is able to capture the essence of any loudness landscape at a glance for a complete and instant overview that includes Loudness History (S), Momentary Loudness (M), True-peak Level plus two user-definable parameters such as e.g. Program Loudness (I) and Loudness Range (LRA). Both Radar Meters even include a Statistics page showing all numbers and details at once, and both are capable of detailed 24/7 logging.

Forever Compliant
All loudness legislation relies on one or more broadcast standards. Therefore, it is of utmost importance to broadcasters that their loudness management solution is compliant with whatever standard has been chosen in their country or region. DB6 is compliant with all major broadcast standards, including ITU BS.1770-3, ATSC A/85, EBU R128, ARIB TR-B32, OP-59 and more. It even comes fully loaded with presets tailored specifically with each of these standards in mind.

However, standards are still being developed and refined, which means that it is not just a matter of being compliant, it is also imperative to stay compliant. TC Electronic has taken part in many aspects of defining and developing the standards mentioned and remains dedicated to keeping its broadcast equipment up to date whenever a new revision is released.

Thanks to open standards, a predictable and transparent loop has emerged, and it is now possible for broadcast production to take the entire signal chain into consideration including ingest and multi-platform delivery. When using the logged data for evaluation, the loop is closed. Like an eternal cycle that keeps spinning to improve broadcast audio right from its source.

Multi or Single – Expandable with ‘Transmission 3G’ Cards
DB6 is available in two different versions – DB6 Multi and DB6 Single. At first glance, they look quite similar, but on the rear panel, there is one significant difference. As the name implies, DB6 Single handles one SD/HD/3G stream, which makes it the perfect choice for the local broadcaster or OB vans. 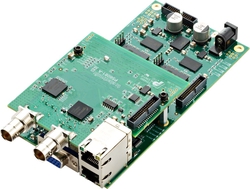 DB6 Multi also comes with the ability to process one stream right out of the box, but it is possible to install one or two additional ‘Transmission 3G’ dual-engine cards and thereby increase the count of total streams per unit to two or three, making DB6 Multi the perfect, high-density solution for any TV station in need of processing multiple streams simultaneously.

Apart from the expandability of DB6 Multi, both versions are identical, featuring the same high-quality hardware and the same powerful software algorithms.