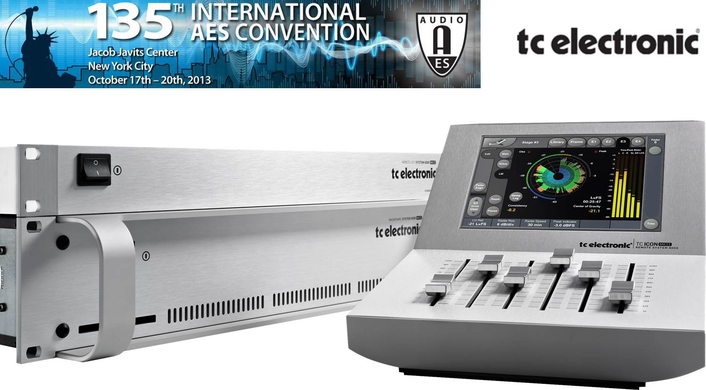 .
TC Electronic’s System 6000 has been a pro audio benchmark since 1999. The MKII upgrade has allowed even more tools to be added, without sacrificing classic algorithms and presets. This overwhelming palette has now been tailored for specific applications: Music, Film, Mastering and Broadcast. However, existing owners of any MKII System may also access the new algorithms announced here.

TC Electronic, an industry-leading developer and manufacturer of high-end audio processors and meters, is proud to announce the next chapter of the System 6000 chronicles at AES 2013 in New York, and all show attendees are invited to come by Booth 2933 to learn more about this new tailor-made approach to pro audio.

Entering the market in 1999, the original System 6000 soon became an industry standard for reverb and dynamics processing. However, TC Electronic has continued to develop new algorithms for the platform and today it offers a very wide palette of tools for all audio professionals. In 2010, an updated MKII version was released and based on this stellar hardware reincarnation; the new Music 6000, Film 6000, Mastering 6000 and Broadcast 6000 set out to reinforce the System 6000 MKII platform even further as the industry-standard processor in pro audio.

With no less than 42 algorithms in the arsenal, System 6000 MKII can be designed to solve virtually any task in pro audio. “Over the years, we have developed so many new tools for this platform that our customers started to configure the system themselves for all kinds of applications. It even found its way into broadcast production and OB vans when we ported our LM6 Loudness Radar Meter to the platform,” says Thomas Lund, CTO for Broadcast & Production at TC Electronic. “Therefore, we decided to create application-specific versions of the system to make it as easy as possible for the mixing and recording engineer, the mastering engineer, the film mixing engineer and the broadcast engineer to find the best possible starting point.”

MUSIC 6000
Music 6000 comes fully loaded with both the Multichannel and Stereo Reverb licenses, holding 18 algorithms, which covers any and all reverb needs an audio engineer could ever have. These licenses even include the M5000 state-of-the-art delay, chorus and phaser as well as hundreds of presets.

On top of this, TC Electronic also added its famous LM6 Loudness Radar Meter to Music 6000. Loudness measuring becomes increasingly important in all parts of audio production – regardless of end destination.  Plus the unmatched, sweet MDW HiRes EQ developed strictly to the personal specifications of the legendary George Massenburg as well as VariPitch8 and Toolbox 5.1 to support surround productions.

FILM 6000
Film 6000 holds the Multichannel and Stereo Reverb licenses plus a brand new 8-channel reverb, "Rev8". Each frame even runs Rev8 twice, thereby comprising the industry's first true 16-channel reverb, perfect for high channel cinema formats such as Dolby Atmos and Auro. As expected from TC Electronic reverbs, Rev8 sums perfectly down to lower channel-counts such as 6.1, 5.1, stereo and mono.

Also new is the AM6 Annoyance Radar Meter that complies with the TASA standard and is an essential tool when producing and delivering commercials or trailers for cinema. Previously, AM6 has only been available as a Pro Tools TDM plugin.

Another important tool for film mixing engineers is the industry-standard UnWrap HD algorithm. Quite simply, UnWrap HD is able to upconvert any stereo or LtRt source to a full-blown 5.1 surround signal, and has dedicated presets for various kinds of music, atmosphere or entire programs including dialog. Once upconverted, stems or programs retain downmix compatibility.

Like its predecessor, Mastering 6000 includes Multichannel and Stereo Mastering licenses, comprised of MDX 5.1, MD 5.1, EQ 5.1, Toolbox 5.1, MD4, MD3, Brickwall Limiter 2 and Matrix 88. In short, all of the multiband dynamics control and EQ a mastering engineer could ever dream of.

The new version of Mastering 6000 also comes with UnWrap HD for when delivering in surround is required, LM6 Loudness Radar Meter for staying compliant with international broadcast standards, MDW HiRes EQ by George Massenburg and VP8 for multichannel pitch correction and modulation.

BROADCAST 6000
Broadcast 6000 was announced last month at the IBC trade show in Amsterdam and is part of the new application-specific System 6000 MKII concept. In short, it is optimized for production with broadcast in mind, and it comes fully equipped with a wealth of pristine algorithms such as LM6 Loudness Radar Meter, ALC6 Automatic Loudness Control, UnWrap HD, Dmix, AM6 plus a wide range of dynamics algorithms, eq and surround tools.