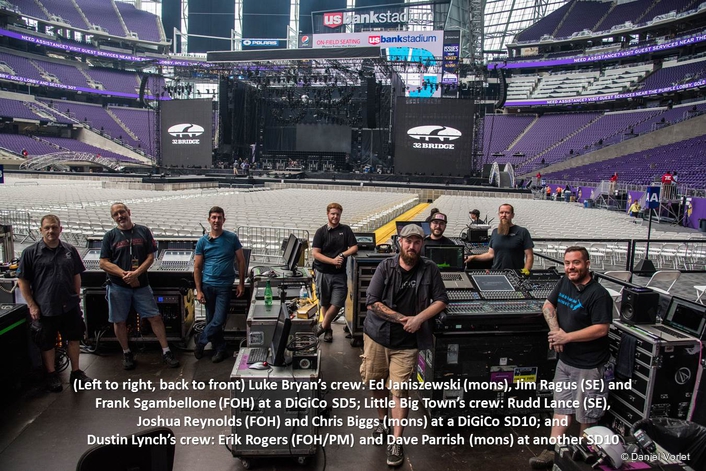 SD5, SD7 and SD10 desks are the first to make a sonic mark in the NFL’s newest venue, totaling six DiGiCo desks on a single tour on one big night

The “Kill The Lights” tour has been killing it on the road. Headliner Luke Bryan and tour mates Little Big Town and Dustin Lynch have been on the road since February with the second year of the tour, which began in 2015, with well over 120,000 tickets sold this year alone. The tour’s success and Bryan’s status as “Entertainer of the Year” award winner from both the Academy of Country Music (ACM) and the Country Music Association (CMA) made it the perfect concert choice to inaugurate the new U.S. Bank Stadium, the NFL’s newest venue and home to the Minnesota Vikings.

The tour played the stadium on August 19, just weeks after its ribbon-cutting ceremony and official grand opening and three weeks ahead of the first regular season game there on September 18 against the Green Bay Packers. But what was also notable was that every FOH and monitor console in the house for that auspicious event was from DiGiCo. Headliner Bryan is using a DiGiCo SD5 for FOH and an SD7 on monitors; ACM, CMA and Grammy Award winners Little Big Town have two DiGiCo SD10 consoles with them for FOH and monitors, as does Platinum-selling artist Dustin Lynch. Three incredible artists, using six incredible consoles, make for one great-sounding opening night for the NFL’s newest venue.

To be the first music performer in a massive new venue like this was “almost overwhelming” for Erik Rogers, the production manager and FOH engineer for Dustin Lynch, who as the opening act on the tour was literally the first artist to sing a note there. “We’ve done stadiums before and the size isn’t intimidating. But to walk out onto a stage and be the first one to play there, that feels amazing!”

There were a few challenges; for instance, Rogers notes that the FOH position is slightly off center, and that the distance from the stage to the FOH position was about 100 meters—right at the limits of their digital snake. But the capabilities of the DiGiCo SD10 console, supplied by Special Event Services, more than offset any challenges.

Rogers says the virtual sound checks he can do are as precise as the real thing. “I actually played back a show we had just done in Aberdeen, South Dakota,” he says. “Sixty-four tracks at 96 kHz sent via MADI to the [DiGiGrid MGB MADI-to-SoundGrid interface] then to the Cat-5 cable and through the Lightning connector from the MacBook. The virtual playback is all we need and the SD10 handles it so well.”

Frank Sgambellone, FOH engineer for Luke Bryan, had similar sensations about being the first to play a new major venue, although he began planning for it back in January, when he learned that Bryan’s shows would be followed the next night by Metallica. The two bands’ production teams worked together on issues such as the size of the stage, making it work to comfortably accommodate both artists’ needs.

“When you have two very different productions coming together in a building that no one’s ever heard before, it has to be a group effort,” he says. And Sgambellone is equally effusive about how the DiGiCo SD5 he’s using helped him adapt. “In terms of sample rates and channel counts, the DiGiCo is absolutely bomb-proof,” he says. “I have been on the front end and the back end of that console and have never had a problem with it. It does everything you want it to do. What I really love about it is that it gives me the ability to do whatever I need to do at a moment’s notice, and in a way that’s comfortable for me. I don’t have to dig through manuals to find what I need. It’s incredibly intuitive for the way I work.”

Being the first in a major new venue has its challenges. Erik Rogers says one of the benefits of the community of touring audio professionals is how they’ll alert and inform each other about what to expect in an environment they may have never worked in before. This time, though, they were the first. “We’ll be the ones who let everyone else know how it went here,” he says. “Fortunately, it went great.”